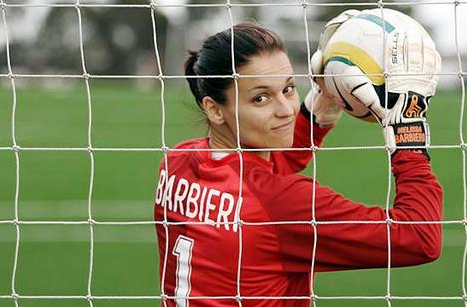 Melissa Barbieri is the goalkeeper and captain of the Matildas. She is wonderful example of how perseverance, hard work and a deep passion of the game can get you to the top of your chosen sport.

I started to play football because my brothers played. I would always go to their trainings and be a nuisance for all the coaches. One particular coach offered me a bench seat in one of their matches when I was eight in the under twelves. With ten minutes remaining I made it onto the pitch and needless to say I didn’t touch the ball. I did however fall in love with the game. I was the only girl in the under eight and under nine teams then I was banned from playing because I was a girl. I commenced playing again when I was 14 and always loved to play on the left side. I was selected for the National train on squad aged 16 as a left midfielder. I became a goalkeeper when aged 20 as I learned that I had undiagnosed left leg pain and numbness and a surgeon suggested I give up football as it required far too much running. I decided that this was NOT an option so became a goalkeeper instead. Within a year I was back in the National team and within two years made my debut for Australia and going on to play in a World Cup and Olympic Games within four years.

Who has been the biggest influence or role model on your football career to date and do you still call on their advice from time to time?

I would have to say Ernie Merrick. I have had a lot of coaches and Tom Sermanni certainly gave me a lot of football knowledge for the last 8 years but really Ernie Merrick gave me a high intensity-training environment and was very blunt with me as a player. He gave me an opportunity to train with the Victorian Institute of Sport boys for 6 years as well as the Victory A League boys for 3 years once he became the coach there. He never let the notion of me being female get in the way of helping me train hard to became number 1 goal keeper in Australia.

I wish I could call upon Ernie but he is hard to track down and never wanted any accolades for making me the player I am today. I usually rely on Tommy for that and now that he is moving to the US it may be a new coach to help me now. My hubby is always a good sounding board too. But he knows nothing about football.. Its more of what’s best for me type discussions.

What world football team did you grow up following and how did you come to supporting them?

From an early age I always supported the Italian National team and after winning the World Cup in ‘82 it made for a massive increase in football memorabilia to our home. Both Mum and Dad are Italian born and when I was growing up the great Italian goalkeeper Dino Zoff and striker Paolo Rossi were my football heroes. I then followed both Australia and Italy up until that fateful day in 2006 in Germany when Italy’s Francesco Totti dived in the box and ultimately eliminated the Socceroos from the tournament. I never supported Italy again after that. Much to my father’s dismay!

The ABC and SBS have long been the mainstays in promoting and supporting women’s football and sports through via great TV and radio coverage, whilst the main networks like TEN, Nine and Seven are somewhat reluctant due to a perceived ratings and audience shortfall. What do you see as the biggest barrier to women’s sport in this country?

We can always gripe about the main media moguls not giving us enough coverage… but until our main body and clubs work together to promote our game effectively then why should we complain about the next level up. The problem is that there isn’t anyone in the main football areas who have the ability to think. What about the W-League? Or What about the Matildas? How can we also advertise them in this space?  It is improving but really it is still not where it needs to be. Merely relying on volunteers to promote our game or saying that ABC and SBS are doing a great job is not good enough.

Do you think that the trialing of games as curtain raisers to some of the big A-League Derby games could help lift the profile and exposure of the W-League?

We they have attempted that… and it hasn’t worked. It doesn’t attract more sponsors or added media coverage. It can open a few people’s eyes to the fact we do play. But in reality what good does it do to pay an extra $10,000 to play before the men?  I would much prefer to see those funds directed towards the players so it can assist them in the important things such as travelling to and from training without the burden of having to car-pool with expensive petrol costs. If clubs want to help raise the profile of their brand and sport…. there are far better ways to do it first.

Can you try and describe the feeling in words when you were first told you were to captain the Matildas and walking onto the pitch with the armband and singing the National Anthem?

Nope I really can’t explain it, but telling you that my father cried when I told him may give you an idea as to the pride I felt.

The small strikers in football like Messi, Maradona etc. are rarely questioned on their size/height and whether it affects their game, but in relative goalkeeping terms you are considered on the short side. It obviously hasn’t made any difference to your performance and success on the pitch, but did you consciously have you always had to work harder in certain areas to achieve your goals?

No not at all. Only once the younger players coming through ranks started becoming taller than me did I really notice it. I have always been athletic enough to account for anything high. My strengths of communication have made it easier for me to stop shots before even making a save. Now that I am older and when I return from maternity leave I ensure that I’m 100% in the areas that may be affected by my lack in height. I will need to work very hard in the gym to regain my power but ultimately really it’s not about my height as it is more about being at my best.

What things do you like to do to help you relax when you are away from the rigors of training and playing international football?

I like to watch TV Shows like Supernatural, Sons of Anarchy etc. Switching off from football is the key when on tour so I don’t mentally wear out.

What is the biggest game of football you have either played in to date or had the pleasure of watching?

I have played in two World Cup Quarterfinals, which are very special, but I will always remember the day the Socceroos beat Uruguay at the Olympic Stadium Sydney in 2005. From the booing of the Uruguay National anthem because of what had occurred in the away tie in Uruguay to the amazing saves by Schwarzy (Mark Schwarzer) and the Mark Viduka miss to finally seeing John Aloisi converting the last penalty shot that ultimately sent them to the World Cup in 2006 … What a game!

We all know goalkeepers are different and have a special union with each other, but when playing, do you have a unique way with which to prepare or perhaps do strange things like put your left boot on first or wear lucky gloves?

Nah I’m a field player at heart so I’m not your typical crazy goalkeeper but I always like to have a bit of a boogie in the change room, which can often make people think I’m a little crazy.

Who in your opinion has the biggest shot in women’s football? Here or abroad?

In games it is hard to gauge the power… but Laura Alleway from the Brisbane Roar and the Matildas has nearly broken both my elbows in shooting practice – so I think deserves the guernsey of being the most powerful shot in World football.