The 1982 World Cup saw the introduction on the world stage of Diego Maradona. David Elkin looks at his first World Cup and the Argentine’s defining run-in with one Claudio Gentile.

World Cups are made up of villains as much as they are heroes. Each triumphant World Cup yin has a grindingly stifling yang – a Patrick Battiston to a Harald Schumacher, a Mauro Tassotti to a Luis Enrique.

For Diego Maradona, there was Claudio Gentile. 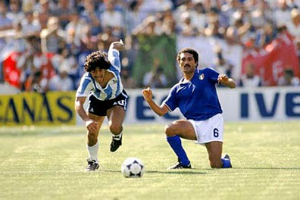 Maradona’s relationship with the World Cup pre-1986 was somewhat anti-climactic. Not selected for the 1978 squad on home soil – he was a prodigious 17 year-old deemed too young for the magnitude of the occasion – which Argentina went on to win, he would need to wait four more years to make his tournament debut in Spain in 1982.

While impressing in the opening group stage, Maradona’s key footprint on the tournament would be what he didn’t, or couldn’t, contribute to their crucial opening game of the second round group stage against Italy. Drawn in a pool with Brazil and the Italians, with one spot available in the semi final, the match against Italy would provide an iconic 90 minutes of neutered talent, anti-inspiration and broken artistry. Enter stage right, our anti-hero: Claudio Gentile.

The hard-tackling, hard-nosed and, presumably, hard-drinking Gentile was the centre back and chief enforcer in the porous Italian defence that would be the foundation for their eventual victory later in the tournament. The Italians drew their opening three games, and were looking bereft of inspiration as their eminent striker Paolo Rossi mis-fired in the tournament’s early stages. Backs to the wall (the standard betting scandal had afflicted the team in the two years preceding the tournament) and going into the game against Argentina, they needed to improve their cutting edge up front and they needed to put a stop to Diego Maradona. They achieved both, looking more fluid going forward and assigning Gentile the latter mission. Gentile delivered.

Watching the complete compilation clip of Gentile against Maradona is oddly hypnotic. The dedication to man-marking and the referee-may-care attitude showed a player who was not to be stopped in this morally ambiguous task – he committed 23 fouls on Maradona. Gentile set about his work with a demented doggedness – the air of a man who had one job, and knew exactly how to do it. Of course, by any modern interpretation of the rulebook, Gentile would not have been allowed past the third foul before a caution, at the very least, was brandished. But in the 1982 footballing universe, this tactic was allowed, and Gentile pushed it to its limits.

In the 35th minute, Maradona received a caution for having the temerity to forcefully inform the referee of the patently obvious shellacking he was receiving from Gentile. When indeed the referee paid heed to the abuses and showed the Italian a caution in the 42nd minute, he was the fifth player on the pitch to receive one. In the 82nd minute, the first and only red card was shown to… the Argentinian midfielder Americo Gallego – for a pretty blatant push it has to be said, but nothing Gentile would have lost sleep over. Following Gentile’s caution, the second half physicality of the Italians appeared to lessen in its severity, but the damage had been done and the intimidatory tone had been set. Italy went on to win 2-1, and their first victory of the tournament pushed them into the crunch tie with Brazil carrying momentum.

However, it was not just the Italians that used such tactics on the soon-to-be Barcelona star. Throughout the group stages, Maradona’s close control as the fulcrum of the team attracted attention and defenders in equal measure. In Argentina’s opening match against Belgium, Maradona hit the bar with a spectacular free kick, but was snuffed out by the Belgian defence in a similar, but perhaps not as single-handedly harsh, manner to the Gentile-ing he would receive later in the tournament. The template was set though – the tournament’s most technically accomplished player could be targeted. All other teams took note.

Argentina’s next game was a comfortable 4-1 victory over Hungary, with Maradona scoring twice and generally excelling. With another rudimentary win against El Salvador finishing the group off, the defending champions went into the second group stage in relatively high spirits – but would come up against Italy and Gentile in the Estadio Sarriá, Barcelona that would put a stop to any momentum. However there were other forces at play in the Argentinian camp that made the 1982 tournament such a failure for a talented team built around the 21-year-old Maradona. 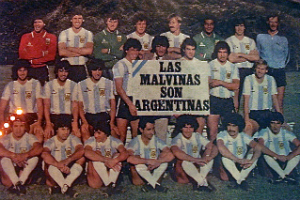 The Argentinian squad arrived in Spain as the Falklands conflict between their country and the UK neared its climax. The military regime at home had censored media coverage of the conflict and its impending Argentine surrender leading Maradona to later recall that on arrival, “We were convinced we were winning the war, and like any patriot my allegiance was to the national flag. But then we got to Spain and discovered the truth. It was a huge blow to the team.” The Argentinian team’s support of their troops was highlighted by a photo taken a month before the 1982 World Cup, with the team holding a banner “LAS  MALVINAS SON ARGENTINAS” – The Falklands are Argentine. For such a politically involved team, the conflict was intertwined with their World Cup campaign. Argentina’s first game of the tournament was on the 13th June 1982, and the country officially surrendered the very next day. An omen of things to come, perhaps.

This political backdrop of a failing regime that would eventually crumble in 1983 was the polar opposite of the context of the 1978 success at home. At the time, the newly-formed military dictatorship was using the World Cup, and Argentina’s success, as a PR exercise for the regime. This excellent Dutch documentary shows the extent the Argentinian government went to impose themselves on visitors and ensure success at their home World Cup.

The pressure on Maradona to excel was coming from all sides. The expectant Spanish media were eager to see what Barcelona had bought – the £3m transfer was completed just nine days before Argentina’s first game against Belgium and was a world record at the time. Maradona was playing in his future home in front of his future fans at the Camp Nou.

Ratcheting up the atmosphere around Diego were comments from Pele, as is his want, in a column for the Argentinian newspaper Clarin prior to the tournament, where the Brazilian said, “My main doubt is whether he has the sufficient greatness as a person to justify being honoured by a worldwide audience.” No pressure, then.

The unsettled nature of Maradona’s ‘82 experience was summed up neatly in his fifth and final game. Against Brazil, that Brazil side of 1982, and needing to win to have any chance of staying alive in the second group stage, Argentina were losing 3-0 and sliding abjectly out of the tournament. Maradona’s frustration came to a head in the 85th minute when he petulantly stamped on Brazil’s Batista. A tournament’s worth of resentment, irritation and youthful insolence was encapsulated in that one stamp. In 1986, his final act would be a triumphant lifting of the World Cup surrounded by ecstatic team mates. His corresponding denouement in 1982 would be equally as fitting – leaving the field a frustrated, desolate figure.

Two videos of Maradona at the 1982 World Cup (great clips, awful music) show him at his impish best during the tournament – here and here. So, why did Maradona not have the impact on Spain ‘82 commensurate with his ability? There is no doubt that the supporting cast were not to the same standard as they would be in the gloriously dominant 1986 World Cup, but there were also external  factors that did not allow Maradona to express himself fully.

The criticism and scrutiny from the Argentine media, from his hero Pele and from Barcelona’s interested observers did not help. The distraction of a country brought to its knees by a political situation at home and abroad had its effect on the squad. The tactics of his opponents were mostly legitimate, physical and intended to snuff him out of the tournament. And then there was the Estadio Sarriá, Barcelona; the snapping and the biting, the clipping of the heel; our anti-football anti-hero: Claudio Gentile.