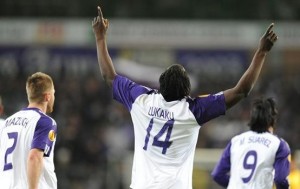 Sunday is supposedly a day of rest. A sacred slice of precious time to pause, reflect and consume copious amounts of roasted meat in the company of your nearest and dearest.  Top-flight football, however, is often a conscientious objector to this unwritten rule.

There’s always a poisonous atmosphere inside the Stadio Olimpico when these two meet, but the antagonism went up another notch when Lazio unexpectedly charged to the top of the Serie A table, with their more fancied rivals already trailing by ten points.

The first half was played out at a curiously pedestrian pace; Roma, starting without suspended talisman Francesco Totti and key midfield orchestrator David Pizarro, were perhaps treating their resurgent old foes with renewed respect. Nonetheless, there were plenty of meaty tackles and enough ill-timed lunges to make Danny Murphy tut loudly in disapproval.

Sub Leandro Greco, on early for the tearful injury victim Jeremy Menez, had a ‘goal’ erroneously ruled out for offside just before half-time, as Claudio Ranieri’s team ended the first period in the ascendant. Their marginal superiority was rewarded early in the second when Stephan Lichtsteiner’s raised hand intervened between ball and goal, denying Fabio Simplicio’s goal-bound shot its rightful place in the back of the net. Marco Borriello, often a frustrated figure up-front, squeezed a quite awful penalty under Fernando Muslera’s body to open the scoring.

The sides then traded blows against each other’s woodwork – Simplico crashing a shot against the bar for Roma; Lazio striking Julio Sergio’s left-hand upright via the boot of Pasquale Foggia, latching onto Mauro Zarate’s fine cross. Though they later had an adequate penalty appeal rejected, leaders Lazio rarely looked like they had the wherewithal to recover. All hopes were extinguished in the 87th minute when Mirko Vucinic coolly converted a second Roma penalty after Julio Baptista, just on as a sub, was tripped in the area by Andre Dias.

The result ensured that Ranieri would retain his 100% record in Rome derbies (three out of three so far) and draw within more manageable reach of Edy Reja’s men, who, despite their defeat remain top of the pile thanks to Inter’s earlier failure to turn over Brescia. But, given its standing as one of the world’s premier rivalries, it had been something of a damp-squib derby. 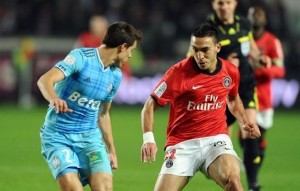 By contrast, early events at the Constant Vanden Stock stadium were fast and frenzied. Battle of the Belgian giants, Anderlecht v Club Brugge started at a furious lick, as the visitors streaked into a two-goal lead during a dominant opening half-hour display. But, as their collective foot eased gradually off the accelerator, the home side struck back twice to equal things up before the break –first a Roland Juhasz header from a corner, then teenage wonderkid Romeu Lukaku’s tidy finish just before the half-time whistle.

Though Anderlecht’s versatile attacker Matias Suarez offered a constant threat, Brugge (now nine points behind leaders Genk) ended a considerably less manic second half on top. A combination of skipper Silvio Proto’s sharp reflexes and some wayward finishing – sub Maxime Lestienne the main culprit – being to blame for their failure to snatch maximum points. Anderlecht, who lined-up without influential forward Mbark Boussoufa, maintained a nine-month unbeaten home record in the Jupiler League with this repeat of last April’s 2-2 draw between the sides and are just two points off top spot.

Hot on the heels of Belgium’s best came a hotly-anticipated Le Clasico. Paris Saint Germain v Marseille (or PSG v OM) started cordially, with coaches Kombouare and Deschamps sharing a typically Gallic peck on each cheek. Restrictions on travelling supporters from Marseille (though not strictly imposed, given the vocal OM presence in certain areas of the Parc des Princes) and PSG’s decision, this year, to outlaw some of their more notorious hooligan groups in favour of a family-based ticket policy also served to dilute the long-held air of animosity between the great rivals.

Red-hot PSG forward Nene had obviously been detailed to attack, at every opportunity, Marseille new-boy Cesar Azpilicueta on OM’s right flank. Spainish starlet ‘Azpi’ has found life on the Mediterranean coast tough so far, and the brilliant Brazilian was in no mood to extend any sympathy to the young full-back.

While the general tempo in Ligue Un leans towards the soporific, this fixture began with a bang. On nine minutes, Marseille captain Steve Mandanda unaccountably fumbled Nene’s low drive from the edge of the box and Mevlut Erding – recently a target of the home fans’ derision – bundled the ball over the line. PSG stormed forward at will; with Gabriel Heinze and Souleymane Diawara looking dreadfully exposed by OM’s lack of a defensive-midfield shield in the absence of Stephane Mbia and their failure to recruit top target Alou Diarra from Bordeaux in the summer.

Nene uncharacteristically mis-kicked with the goal at his mercy, but more than atoned in the 19th minute with an inspired lobbed pass over the Marseille defence, leaving Guillaume Hoarau the simple task of poking the ball past the stranded Mandanda. Game over after twenty minutes? Not likely. Just five minutes later AP Gignac stormed to the byline, his cut-back only palmed into the path of Lucho Gonzalez by Armenian-Cameroonian ‘keeper (it’s a long story) Apoula Edel. The industrious Argentine had no trouble slotting into an unguarded net from close range. 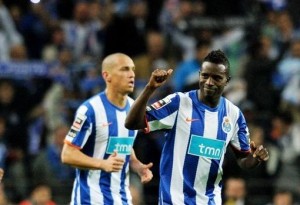 That was as good as it got for the visitors, however. Gignac and his partner Loic Remy were wasteful with the few second-half chances that came their way and PSG held on for a win that takes them into third – just above Marseille, who have a game in hand. After many false dawns in the French capital, PSG look set to mount a significant challenge this year. With creative hub Nene often dropping deep to make the play, combining excellently with new full-back recruit Siaka Tiene, and young Clement Chantome’s recent inclusion at the expense of Mathieu Bodmer and Jeremy Clement (an unusually progressive move by the combative Kombouare) they are more pleasing on the eye too.

A description which also comfortably fits Portugese league-leaders Porto under the fresh management of Jose Mourinho’s erstwhile assistant Andre Villas-Boas. Despite the clubs’ obvious Iberian pre-eminence, Porto v Benfica does not quite carry the lustre of a Lisbon derby, but several pundits (including Mourinho himself) were already cueing the game up as a potential title-decider.

If that’s the case, consider the destiny of the championship trophy decided; as Porto ruthlessly decimated champions Benfica at the Dragao.

The Eagles were duly run ragged by the clinical Colombian Falcao and his bustling cohort Hulk, though the second half was broken up by delays due to Porto fans firing golf balls and the occasional live chicken (not headless) at Benfica keeper Roberto’s back.

So Porto extended their lead to 10 points, finishing the job in style as Benfica ended in disarray; having captain Luisao sent off in the 65th minute for elbowing Fredy Guarin. Hulk converted a penalty on 79 minutes and completed the rout with a long-distance drive just before the final whistle. That goal set the seal on an action-packed Sunday to delight fans of hostile rivalries, flowing football and free-range chickens.

2 thoughts on “Clashes of the Titans”