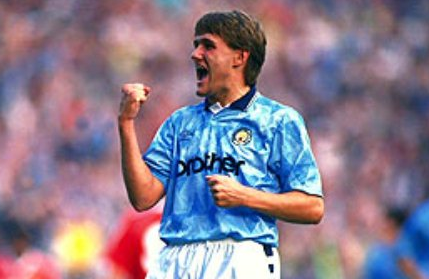 September 1989 in Manchester was an exciting time. The city’s vibrant music scene headed by the likes of The Stone Roses, New Order and Happy Mondays, was filtering into the nation’s consciousness and its two First Division football teams were also making the headlines once again following a period of disappointment and underachievement.

Manchester City had been on a steady decline for over a decade and twice during the 1980’s had suffered relegation to the Second Division. They had just returned to the top flight after an absence of two seasons when coming in as runners up to Chelsea in the previous May.

Manchester United at this time were no less of a circus than their cross-town rivals. Sporadic wins in cup competitions failed to quench the supporters yearning for success in the league which had eluded them since 1967. The high profile appointment of Alex Ferguson had failed to bring the expected silverware and by the end of the season he would barely escape the chop, thanks to THAT goal by Mark Robins at Nottingham Forest.

United were also in the grip of the infamous and ultimately unsuccessful Michael Knighton takeover saga. The flamboyant businessman had agreed to buy the club and will be forever remembered for donning the full kit and performing keepie-ups in front of the Stretford End on the opening day of the season. Not really a move you could see Malcolm Glazer copying any time soon!

Sir Alex, or just plain old Alex as he was back then, took his expensively assembled side to Maine Road without Steve Bruce and more importantly, his own Captain Marvel, Bryan Robson, probably the finest English player of the time. While United were able to splash the cash on additions such as Paul Ince, Mike Phelan, Neil Webb and Britain’s most expensive defender Gary Pallister, Manchester City were a side made up of journeyman and youth products, albeit very talented ones. City manager Mel Machin included David White, Andy Hinchcliffe, Ian Brightwell and the much heralded Paul Lake from their 1986 FA Youth Cup win over United in his starting lineup for the 111th Manchester derby.

The game itself was barely three minutes old when the all-too-familiar spectre of crowd trouble raised its ugly head. A group of United fans had penetrated a City only section and fighting broke out, at which point the referee took the players from the field while order was restored. If United fans were up for the fight on the terraces, their passion was not reflected by their players on the field.

When the teams did return it didn’t take long for City to take the lead. Australian striker David Oldfield lashed home a shot from a fairly weak cross which Gary Pallister, resembling a giraffe on rollerskates, should really have cut out. Worse was to come just two minutes later when the moustachioed Trevor Morley capitalised on comical United defending to poke home a second City goal.

Fergie’s shellshocked troops had just begun to get a foothold in the game when they were hit by a lightning quick counterattack which culminated in a headed goal for scouse midfielder Ian Bishop, ten minutes before half time. The costly Pallister, who would eventually become an Old Trafford legend was having a nightmare as he was outstripped by Oldfield again in the build-up to City’s third goal.

We can only imagine the extent of Ferguson’s anger and the ferocity of his half time teamtalk delivered to his expensive and hapless charges. Whatever was said in the dressing room had an immediate effect as Mark Hughes produced a stunning back post bicycle kick for which he should have had trademarked and copyrighted to bring United temporarily at least, back into contention. It would have been just like United, even then, to produce a stunning comeback and even more likely, as all City fans will testify, that they would have made a right hash of closing out the seemingly guaranteed victory.

The comeback however, was shortlived. The Citizens restored a three goal cushion as yet more United defensive frailty was exposed by Paul Lake who squared for the blonde-haired Oldfield to prod the ball into an empty net. And the rout was completed by left back Andy Hinchcliffe’s powerful header to round off a superb sweeping move by City. Hinchcliffe celebrated by waving five fingers in the direction of the United fans just to rub in the sense of embarrassment they must have felt by the ineptitude of their side’s performance.

Luckily for United, the season ended in triumph as they picked up the FA Cup at Wembley to give Ferguson his first, and crucial first trophy in the Old Trafford hotseat. He and United never looked back.

As for City, they finished in mid-table that season, one place behind their greatest rivals on goal difference. The victory at Maine Road proved the undoubted highlight that would sustain City fans through many years of desperation at the hands of their neighbours. A whole generation of fans had to wait 22 years, countless disappointments, relegations and false dawns for their moment of glory. How could they ever surpass the 5-1 victory over United in ’89? There’s a story for another day…