The biggest talking point of the Transfer Window so far seems to be Edin Dzeko’s imminent arrival at Manchester City. Various sources report that the Bosnian hitman will sign for the Blues on Tuesday, with a fee reported to be around £27 million. With these latest news of transfer acitivity, it’s time to examine the nouve riche part of Manchester and the credibility of their title aspirations. The Eastlands outfit, once labelled “noisy neighbours” by rival manager Sir Alex Ferguson, now sit equal on points with their red counterparts from across town, second in the table only by virtue of goal difference. Under Roberto Mancini’s reportedly strict coaching regime, they find themselves in the middle of a title race promising more excitement than ever before in the Premier League. Although the season so far hasn’t been free of controversy, be it Carlos Tevez’s copycat-version of Rooneygate or Mario Balotelli’s rumoured desire to leave for AC Milan shortly after arriving, City have fought through a tough spell and are still in the hunt for glory. With the resources and squad at their disposal, no-one should laugh at the idea of them breaking into the top four, as they so nearly did last season. In fact, only a fantastic second half of the season from either Spurs or Chelsea would seem likely to push City out of next years Champions League-places, an important landmark for the ambitious club and it’s players.

But in a season that  have seen Manchester United lead the race without impressing, unbeaten though they are, other teams seem reluctant to capitalize on the unpredictable nature of the league. Arsenal have shown signs of mental and defensive frailty, traits that have derailed their title challenges more than once before. Chelsea have seemingly collapsed under their own weight, or rather through a lack of support in their squad depth. Spurs, although entertaining and refreshing, leaks too many goals to really defend a strong challenge at the title, and so it seems that Manchester City are bound to have a chance. How big is the possibility of a first league title to the blue part of Manchester since 1968?

First of all, looking through the squads of the various title contenders, City seem strong. They’ve got good cover all over the pitch, with players like Craig Bellamy not even registered in the Premier League squad, but rather loaned out to the likes Cardiff City. Adam Johnson, one of the most exciting young wingers in England doesn’t start regularly, and Mario Balotelli, widely regarded as one of the world’s most talented yet hotheaded strikers has so far played second-fiddle to the talismanic skipper, Tevez. Wayne Bridge, only about a year since his last inclusion in the England squad, is 3rd choice at left back. City should have a strong enough squad to sustain any injuries coming their way. Injury  problems could be argued to  have tarnished Manchester United, Chelsea and Arsenal’s records this season in various ways. 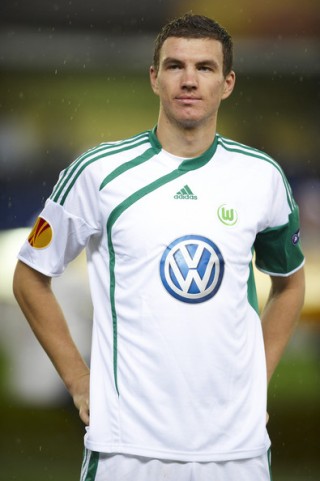 Looking at the favoured first eleven of Roberto Mancini, he prefers a system and a side which puts emphasis on defensive stability and balance. The goalkeeper Joe Hart is a very good shot-stopper, and has had a fine season behind the sticks. Their back-four is perhaps still suspectible to the old hiccup, which might explain the Italian’s tactical apporach. Although Vincent Kompany has excelled at the heart of the defence, Kolo Touré, Micah Richards and Pablo Zabaleta perhaps don’t hold the same quality and as such City seldom compromises their defence by leaving them unshielded. The players tasked with doing that job are Nigel de Jong and Gareth Barry. Although the hardtackling Dutchman de Jong has impressed, Barry perhaps are a bit of a passenger in an otherwise strong and forceful midfield, often opting for the safe option and not really imposing himself in matches. It has to be noted that neither of them are particulary inventive on the ball, nor do they offer much drive, so the offensive responsibility rests elsewhere.

Yaya Touré was often utilized as a holding midfielder in Barcelona, and there were many voices that argued that the role shackled him. At City, he’s the pinpoint of the midfield three; the man responsible for supporting the attack. Touré has at times excelled, and his powerful runs and willingness to get forward has been vital for a City team that’s been hard to break down, but likewise has struggled to create chances at times. The preferred front three of Mancini has to be David Silva, Tevez, and since his return from injury and to form, Mario Balotelli. Silva provides the creativity that unlocks opposing defences with smart dribbles and incisive through balls, Tevez is the goalscorer of the team and often the inspiration through his sheer will upfront, and Mario Balotelli is the unkown variable. Together they have at times looked lethal, but where City have struggled this season are in the games where they have been met with a defensive tactic.

The signing of Dzeko might be addressing the biggest criticism of City’s attacking play this season. Their lack of people in the box have at times made them impotent in front of goal and faced with opposition teams lining up 10 men behind the ball. Tevez have often been the only attacking player to get into the box, as the others are more comfortable in wide positions, support positions or mopping up the leftovers. Balotelli has somewhat rectified this problem, but having Dzeko as a more direct route to goal can’t be a bad idea. The big striker would make City more threatening on crosses and provide added aerial presence. His goalscoring record is indisputable.

As their win against Blackpool at the weekend showed, City now seem to have gained the ability of winning tight matches where the offensive movements and inventions of Silva, Touré et al don’t come off. They’re already a very good defensive unit, as Mancini no doubt has prioritized, and if they can click into gear offensively then they will be there or thereabouts come the end of the season. There is enough quality in the City side to beat most teams, the question is can Mancini do what Harry Redknapp does so well at Tottenham? Can he make his team believe in themselves and take the game to the other top teams? So far Bobby Manc has opted for the cautious approach, but chances are as the stakes are raised closer to the end of the season, they will need some big wins against their title rivals.

If you still don’t treat the idea of City winning the Premiership with respect, you should soon start to. Even if they don’t pull it off this season, they will be close. If Mancini can manage the egos in his side, add one or two quality players in defence and perhaps set his team up just a bit more attack minded, then they will be fighting all the way for the title. They’re not far off having the strongest first eleven in the league, and they certaintly got the strongest squad along with United. The question marks aren’t concerning their quality, but rather their mentality and team ethic. City are here to challenge, and they won’t go away for a while.

10 thoughts on “City – pretenders or the real deal?”