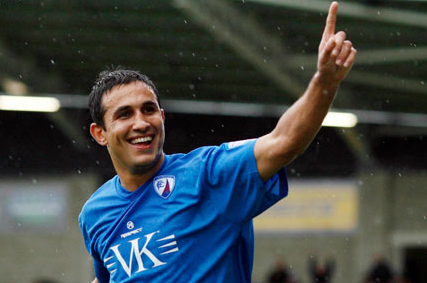 The sum-total of Chesterfield’s contribution to the modern English game can probably be merely seen as creating the twitter-phobic, one-cap-for-England, current Bolton captain that is Kevin Davies, purveyor of knock-downs.

Davies is the very personification of the stereotypical English game, with his blood, sweat and tears approach and dubious technical ability. His remarkable ability to muscle into centre-backs was first brought to attention to the higher echelons of England’s football clubs during Chesterfield’s remarkable F.A. Cup run in 1997, which saw them and their fans occupy Old-Trafford to face Middlesbrough. The game can be summed up with any number of superlatives designated to a team of the old division four, but essentially had David Elleray listened to his assistant and given a goal that just about crossed the line after cannoning off the crossbar, Chesterfield would have been at Wembley. That was it, their chance gone. Poor officiating cost them glory, and because of the plutocratic nature of the modern game it would be hard to see them ever achieve such heights. Forever destined to remain the club which – as any overly enthusiastic football geek worth his salt knows – the great Gordon Banks began his career. It was a bleak time for Chesterfield football club; they had been robbed.

Chesterfield football club and their fans are nicknamed the Spireites; they are called so because of the outstanding architectural imperfection that adorns a church in the centre of town. The crooked spire. It is very much Derbyshire’s answer to the leaning tower of Pisa. The crooked spire lends itself perfectly to an analogy regarding Chesterfield F.C. after their historic semi-final. Their crooked chairman came close to dissolving their status as a team in the football league for their off the field misdemeanors. A mere 3 years after the crushing disappointment of their remarkable cup run, Chesterfield were relegated to the 4th tier of English football. Swooping in to attempt to control the club following this damning setback was a new chairman, Darren Brown – not Derren Brown the illusionist – however Darren does share some similarities with his nearly-namesake. Darren you see attempted to give Chester City the illusion that he actually paid a fee for their striker Luke Beckett. This troublesome saga cost Chesterfield a 9 points deduction and a hefty fine, and yet remarkably, despite this, they were promoted that very season. Many Chesterfield supporters feel to this day however that the irregularities in their boardroom somewhat mired their otherwise excellent campaign which saw them return to English football’s third tier. The occasion was soured which invariably overshadowed their eventual reward. The promotion was certainly against the odds, but Chesterfield was associated as a club that did not play the rules.

Like a terrible inner-city American detective show, they didn’t play by the rules, and they didn’t get results.

In 06-07, Chesterfield was once more relegated to the 4th tier of English football. They had been muddling about in the 3rd for several years, battling relegation and slowly inching up the table at a Heskey’s-pace, before finally slipping into the final relegation spot in the table, having slowly and gracefully withered away. It was certainly unfortunate, yet hardly surprising. Not that Chesterfield fans felt any self-entitlement to be in the 3rd division, the spireites greatest memory is that of their 4th division title-winning side of 1969-70. There is very little about them that the contemporary football fan may remember, besides of course that F.A. cup semi-final against Middleborough. Unlike many other lower-league teams, they have never had a watershed moment in their clubs history to fondly reminisce on. No, instead they are waiting for that moment. Chesterfield F.C. and its fans are not speaking of emulating the cup-winning heroes of a generation gone; rather they are out to make history. They want to make their mark English football. Chesterfield wants to, and is, going places.

Now we are here. At the end of the 2010-2011 season, you may have noticed Chesterfield have been promoted from the infuriatingly named League Two into the League One. They finished 5 points clear at the top, and led the league for the majority of the season. They lost a mere 8 home and away, and won 24. They can boast the finest goal difference in the league, with 85 scored and 51 conceded. These statistics aren’t breathtaking, but the fact is anyone who has watched Chesterfield this year knows they have been wonderfully deft at winning games under all circumstances. They won big games, little games, and games when they were holding a lead, games when they had to drag themselves back from behind. This was no scrap for the play-offs – an unfortunate staple of Chesterfield’s promotion ambition over the last few seasons – it was, dare it be said, quite easy. At times their play possessed a swagger and flair that somehow looked downright out of place on the muddy, quaint fields of the 4th tier. It was samba stuff from the Spireites. Many of their supporters are now calling this their greatest ever season.

This club has been going for 144 years, and people are actually saying it is their greatest season ever! Even if you are absolutely indifferent to lower-league football for its lack of grandeur and elegance, there is no denying that Chesterfield deserves some praise. It is not simply the promotion that has caused Chesterfield fans to run their praise of this current team so high, it was the entertainment they were provided week-in-week-out. Perhaps the most astonishing highlight of the season was the absurdity of their 5-5 draw at home with Crewe in October. It was an exciting, spirited performance that will surely last long in the memory. It was a game that made Arsenal 4 Newcastle 4 seems downright pedestrian in comparison, and serves to show the joy that watching lower-league football can sometimes offer when placed up against the sweltering beast of the Premier League. That game was a blip though, Chesterfields defending is far better than that; their annihilating of local-rivals Rotherham 5-0 was probably the highlight of the season, but demolishing 5th placed Accrington Stanley 5-2 must also surely be up there. There are many more dry statistics to point to, but of course the secret to any teams’ success requires three key elements: Good manager, good players, and a good stadium with a loyal crowd, and Chesterfield possessed them all this season.

For starters, their success on the pitch this season must be greatly attributed to their talented young manager John Sheridan. The former Irish international is in only his second job as a first team coach, yet has already achieved that most difficult of tasks as a manager – the one in which every coaches job hinges –  getting the best out of his players. His signings, seemingly underwhelming at first, are now being viewed as wonderfully inspired pieces of business that have revived the seemingly stalled careers of several understated lower-league journeymen. Just a few of these include Danny Whitaker – former player under Sheridan at Oldham – if Steven Gerrard shaved his head and partook in some un-flattering dental work then it would be irrelevant as Whitaker is better. Ok, not better, but certainly more vital for his team. Whitaker has clocked up an excellent 12 assists and 15 goals in all competitions from midfield. The 35 year old cultured striker Jack Lester, though not signed by Sheridan, has very much been transformed into the Derbyshire Bergkamp for the Spireites, with an excellent haul of 18 goals and 8 assists. Sheridan’s finest act so far however has been transforming striker Craig Davies from an inconsistent never-will-be into a sheer force of nature as he rests on his lofty peak, perching atop mount-Chesterfield’s pantheon of top-scorers. His 25 goals in all competitions and 4 assists have made him an unsalable asset to the club. The fulcrum of their attack. The galactico of the B2NET stadium.

This season was the first for the B2NET stadium. Their former stadium, Saltergate, lasted 139 years and commanded respect as one of the seemingly bygone old grounds of a forgotten green and pleasant land. It had a Kop stand, as well as one completely uncovered and open to the elements, an unfortunate consequence of being an away supporter. The sentimentality invoked of Saltergate – to me at the very least – conjures up images of raucous young drunks bellowing their feelings with both charming and repellent local idioms. It was grimy; it had static advertising boards showcasing meat pies looming above the turnstiles. The pitch was very much one of English footballs fourth tier. Yet Chesterfield fans do not appear to be particularly misty-eyed about this grand-old-ground. Their ambition has them looking towards the future. They have taken to the B2NET quickly and – despite the obvious downgrade in the quality of the stadiums name – Saltergate is a memory now. Their new stadium, sleek, plush and with a wonderfully consistent pitch (their groundsman, Anthony Haywood, has been named groundsman of the year for league two) is befitting of the new league Chesterfield will find themselves playing next season. The new stadiums attendance regularly finds 10,000, and a glimpse through the fans letters in the local paper will provide plenty of evidence as to how quickly Chesterfield have taken to this new ground. The ground, they hope, will see them find their greatest successes for the future.

There are many things about Chesterfield football club I have omitted from this piece so far. There was also the financial white-horse in the shape of the Chesterfield Football Supporters Society that saved them from the bankers grasp; as well as their numerous cup-runs and managers who deserve praise also for their fine work with the club. I originally intended to add several testimonies from die-hard Spireites I found in the local papers, but alas – with typical northern understatement – their ability to extravagantly poeticise on their clubs achievements was somewhat lacking. 57 year old Mick Harrison for one believes “the team will do well next year”, 80 year old Stanley Bush insists “This team plays well together”, and who could forget the adorable 7 year old Cory Gee, who’s brief summarisation of the teams achievements was that the whole affair was “all very exciting”. There was not much to work with.

If there is one thing that these quotes do show however that is the fans have optimism. Not hope, not an inherently fearful attitude about what lies ahead in the bigger leagues, they simply realize that their team is good enough to compete in England’s 3rd tier. For that matter however, why not the 2nd tear? Or the 1st? If the exuberance of Sky Sports montages about Blackpool has taught us anything it is that dreams can certainly become reality. Chesterfield has no fear. They will enter next season knowing that they have the ability to assert themselves on League 1. What happens after that, who knows? Rome wasn’t built in a day and Chesterfields legions are on the march.

An irreverent and opinionated man who likes his football like he likes his women; flawed, brash and foreign.