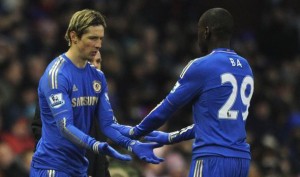 Chelsea’s 2-1 defeat away a Sunderland has been indicative of the up and down season they’ve experienced since the second coming of ‘The Special One’ (now ‘The Happy One’). Jose Mourinho was supposed to turn up, provide defensive stability and bring together a promising young squad to challenge for trophies.

Whilst most fans won’t be too fussed about the defeat to Sunderland, it is now one trophy that Chelsea cannot win and a further example of the obvious problems that Mourinho has been experiencing this season.

Sitting two points off the top domestically, one might argue that such assertions are premature, but their stop-start league form is certainly a cause for concern, especially ahead of a key game away at Arsenal.

Some of the issues at Chelsea are quite clear and have been so for at least a season or two. Most notably, the issues regarding Chelsea’s misfiring strikers are astounding. If we assess the table below we can see how badly they are misfiring if we compare the goals provided by strikers to other sides in the top four:

Chelsea compare woefully to their rivals in this regard. Although Arsenal’s forwards have scored just eight it’s worth noting that they play one up top and that Olivier Giroud’s seven goals equate to two more than Demba Ba, Samuel Eto’o and Fernando Torres’ goals combined. Unsurprisingly Chelsea have scored the least amount of goals of any top four sides and also have the worst goal difference.

The lack of goals from the strikers could be a major determining factor in where the league title ends up this season. A fact that has been compounded by the form of loaned out striker Romelu Lukaku who has managed to net eight goals in just twelve appearances for Everton, something that is greatly frustrating for Chelsea fans.

The striking issue is not the major concern, although it is impacting on the side of the whole. One other area that is related, is Chelsea’s incredible inability to keep clean sheets at the moment. Chelsea have kept just one clean sheet in their last 11 Premier League games, an astonishing statistic for a Jose Mourinho side.

One of the issues is that Chelsea’s two best defenders of the past several seasons, Ashley Cole and John Terry are now past their best, being 32 and 33 respectively. The pair have had an excellent understanding on the left side of Chelsea’s defence, but have not been as great this season. Terry’s positioning hasn’t always been as good as it could have been, although he’s arguably, along with Branislav Ivanovic been Chelsea’s best defender. Cole on the other hand has suffered, he looks slower now and less able to recover situations as he once was.

The centre-back pairings also don’t look fantastic. Gary Cahill is adequate without being excellent, he is nowhere near as good as Terry was in his prime. David Luiz whilst having some good qualities is too inconsistent and not a reliable presence at the heart of the defence. Chelsea are arguably crying out for a world-class centre-back to take over from Terry and this should be a priority for Chelsea in the summer.

The future of Petr Cech should also arguably be considered given that Atletico Madrid keeper Thibaut Courtois is on loan from Chelsea and is now establishing himself as one of the top keepers in European football. Cech on the other hand hasn’t been brilliant this season, playing his own role in Chelsea shipping cheap goals, something that was once unthinkable.

The defensive issues are tied to the attacking issues facing the club. Without scoring the killer goal Chelsea are forced to keep pressing on, rather than sitting back and counter-attacking, thus causing the side to me too open. Against Stoke this was very much the case as Chelsea squandered chances to allow Stoke into the game. On leveling the tie, Chelsea pushed on to find the winner and in turn left themselves exposed at the back which led to them conceding the third goal. Jose Mourinho has recently hinted that he will adopt a more counter-attacking style, which may involve dropping one of the three attacking midfielders, in favour of another central player to solidify the side in the midfield.

All of this hints at a potential return to a 4-3-3, the formation that brought Jose Mourinho so much success back in his first stint at the club. Chelsea loosely operated like this versus West Ham and won 3-0, getting their only clean sheet in the Premier League since September. That being said Jose Mourinho does not have a squad suited to a 4-3-3, given the huge wealth of attacking midfielders at his disposal. Of which only Andre Schurrle and Eden Hazard are really able to play as ‘wingers’. Even though both are best from the left side leaving no obvious candidate for the right-sided role (although Oscar played from the right against West Ham).

If a move to a 4-3-3 is undertaken the side are short in the centre of midfield with Marco van Ginkel a long-term casualty. This leaves just Frank Lampard, John Obi Mikel, Michael Essien and Ramires to choose from, although all of these players operate better in a three-man midfield, rather than a two-man pivot such as that used in the 4-2-3-1 formation at present. This would of course solidify things for Chelsea and Hazard would obviously offer a great deal on the counter, but it would not solve the issue of Chelsea’s lack of penetration up front. Moving to a counter-attacking system though, Jose Mourinho might be prepared to battle out 1-0 wins, rather than suffer the sort of 4-3 victory his side enjoyed at Sunderland a few weeks back.

Chelsea’s current form has been mixed. The clubs form has been stop and start largely due to the aforementioned factors. Oddly despite their mixed form, the club still remain in pursuit of the Premier League title ahead of Monday night’s clash with Arsenal. Whilst their away form has been poor, a victory in this tie would take them above Arsenal and potentially to the top of the table.

Whether a more conservative approach will bear fruit though, remains to be seen, but Chelsea’s problems are clear for all to see as they look to rebuild for the future in what Jose Mourinho has term a transitional season.