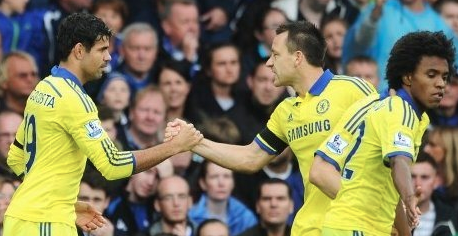 Three points and six goals will certainly have pleased Jose Mourinho on Saturday, but it was the lapses in concentration that allowed Everton make a game of it that will probably have dominated his post match debrief.

Having chastised his men for a lazy first 45 minutes against Leicester the previous Saturday, the look of exasperation on Mourinho’s face as Chelsea repeatedly gave the Toffees hope will suggest that not all lessons have been learned by his players.

Chelsea undoubtedly now have the personnel and class to go and win the Premier League. Only a lack of application, focus and perhaps Diego Costa’s hamstrings threaten to undermine them.

Incidents involving three Chelsea players illustrated both the side’s quality and their propensity at this early stage of the season for sloppiness. First up was the mercurial Eden Hazard. Chelsea had worked in disciplined fashion all first half to usher Kevin Mirallas and Aiden McGeady into a cluttered midfield in order to deny Everton opportunities to work overlaps for Baines and Coleman.

Clearly a pre-planned operation, it required a lot of effort and positional concentration from Chelsea’s midfield. But right on half time, with the visitors two up, the Belgian let his guard down. As Everton worked the ball from left to right, Hazard switched off and let Coleman go. McGeady played him in and Mirallas dispatched the Irishman’s excellent cross.

But Hazard was to atone for his error and show his class early in the second half – and was directly responsible for Chelsea’s third. Isolating James McCarthy wide left, he skinned the Irish international before driving in a low cross from the byline that the unfortunate Coleman could only divert into his own net.

But almost from the restart, Ramires – perhaps thinking the hard work was done – “did a Hazard” and allowed McGeady to breeze past him in midfield to set Naismith up for Everton’s brilliant second. Mourinho was not amused. However, the Brazilian was also to redeem himself in that madcap second half with a smart finish for Chelsea’s fifth.

At 5-3, Thibaut Courtois was another to let his mind wander. A dreadful attempt to find Cesar Azpilicueta with a quick throw saw Coleman steal in, trade passes with Lukaku before setting up Mirallas for what would have been one of the finishes of the season. However, Courtois showed just why he has dethroned Petr Cech with a stunning save to push the ball on to the post and away to safety.

Judging by Mourinho’s touchline demeanour, the sloppiness had been duly noted and the players involved will no doubt have been made aware of his displeasure. Concentration, application and discipline are just as important as technical ability and creativity for prospective champions. Just look at Diego Costa. The Spanish hitman produced a world class performance, with goals in the first and last minutes just reward for his work rate and focus – neither of which dropped over the 90 odd minutes of a pulsating affair. Messrs Hazard, Ramires and Courtois will doubtless be invited to take note.

One thought on “Chelsea have the class – but do they lack concentration?”