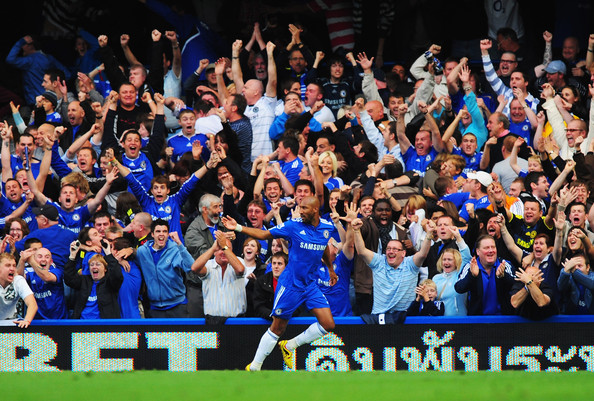 Chelsea already has one foot in the quarter finals of the Champions League while Real Madrid face the tricky prospect of eliminating a Olympique Lyonnais side with a fine record against Spanish opposition in Wednesday night’s Round of 16 games writes Back Page Football contributor Ger McCarthy.

FC Copenhagen faces the daunting task of overturning a 2-0 first leg deficit to progress to the quarter finals of the UEFA Champions League at the expense of Chelsea. Stamford Bridge is the venue for a second leg and the London side will kick-off having secured a 2-0 victory over the Danes over a fortnight ago courtesy of a Nicolas Anelka brace of goals. The odds are stacked heavily against Copenhagen with Chelsea having qualified for five of the last seven semi-finals in the Champions League.

Following an excellent run to the last sixteen Stale Solbakken’s side have also maintained their dominance in their domestic Danish Premier League by opening a massive 19 point gap to nearest rivals Odense and Brondby. ‘The Lions’ suffered their only league defeat of the current campaign away to FC Midtjylland (2-0) following their loss at home to Chelsea in the first leg but bounced back to record a narrow 1-0 win over Aalborg BK and quickly re-assert their title credentials. According to UEFA Copenhagen’s 51-point tally going into the winter break was the highest ever achieved by any team at this stage of a Super League campaign and the champions-elect have warmed up for their date in London with six friendly’s during January and February, wining four and drawing two.

Chelsea’s stuttering league form which included a solitary victory in five league attempts was quickly addressed once the first leg victory over FC Copenhagen was completed. With confidence restored Carlo Ancelotti’s side set about reducing the deficit at the top of the Premier League and recorded notable victories at home to Manchester United and away to Blackpool to move back into the top four in the standings. The return to fitness of Frank Lampard has coincided with Chelsea’s upturn in form although the continuing struggles of record signing Fernando Torres in front of goal remains a worry for players and fans alike.

The Pensioners exited the FA Cup on penalties at home to Everton recently and that loss prevented the Stamford Bridge club from possibly achieving a unique three-in-a-row of FC Cup triumphs following Wembley successes in 2010 and 2011. Their cup exit did afford Ancelotti’s squad the opportunity of an extended break however and they are clear favourites to progress with the cushion of a two goal lead heading into Wednesday night’s encounter.

The return of Frank Lampard has strengthened a midfield area that had been lacking spark in previous weeks. Expect Michael Essien to partner Lampard with Obi Mikel possibly used as a holding player in front a back four with new signing David Luiz continuing to impress since his January move from Benfica. Up front Ancelotti will select two from Anleka, Drogba and Torres. A nice problem for any manager to have but Chelsea have become over reliant on their midfield plus Anelka’s goals in recent weeks and need both Torres and Drogba to rediscover their goal-scoring touch as soon as possible.

The visit of Copenhagen on Wednesday evening offers a perfect opportunity for both strikers to break their recent scoring duck. Chelsea should have more than enough to go through to the quarter finals with the cushion of a 2-0 first leg advantage.

A fascinating night at the Santiago Bernabeau is promised between two sides who know each other quite well from recent Champions League encounters. Jose Mourinho leads his Real Madrid team out against an Olympique Lyon side who knocked the Spaniards out of the previous 2005, 2006 and 2010 Champions League tournaments. Former Lyon striker Karim Benzema handed Real the lead at the Stade De Gerland in the opening leg but a Gomis leveller five minutes from the end saw the tie end in a 1-1 draw.

Lyon enters the intimidating atmosphere of the Bernabeau Stadium on Wednesday night comforted by the knowledge that the Ligue 1 club eliminated Los Merengues at the same stage last season. A Pjanic 75th minute equaliser cancelled out Cristiano Ronaldo’s opener in the Round of 16 clash and sent the French team through 2-1 on aggregate.

Despite conceding an away goal a fortnight ago Lyon will have every chance of progressing if they can reproduce some of their domestic form which has seen Claude Puel’s side re-emerge in the Ligue 1 title chase. Lyon are just four points behind leaders Lille following two wins and a draw since Real Madrid’s visit. Star striker Lissandro has also hit a rich vein of form with four goals in two games and will pose a threat to the Madrid back four if played as a conventional striker rather than wide on the left. Midfielder Yoann Gorcuff and defender Cris could also feature on Wednesday night having been rested in recent weeks.

Jose Mourinho’s Real Madrid remains hot on the heels of La Liga pace-setters Barcelona and are 5 points behind the Catalans at the time of writing. The Spanish domestic title remains a long shot for Madrid but a Copa Del Rey final with their arch rivals Barca offers a realistic chance of silverware. This year’s Champions League campaign has seen Real top their group ahead of AC Milan and score a crucial away goal in the Stade De Gerland last time out.

Three consecutive league wins over Malaga (7-0), Racing Santander (3-1) and most recently Hercules (2-0) has Mourinho’s men on a fine winning streak but the Spaniards can expect a much tough test than recent domestic fixtures from Lyon on Wednesday evening.

Last Word
The re-emergence of Karim Benzema as an attacking threat with eight goals in his last six appearances has added to an already impressive Real Madrid attack. It promises to be a nervy evening for the home fans but expect Jose Mourinho to oversee Real’s passage into the last eight.