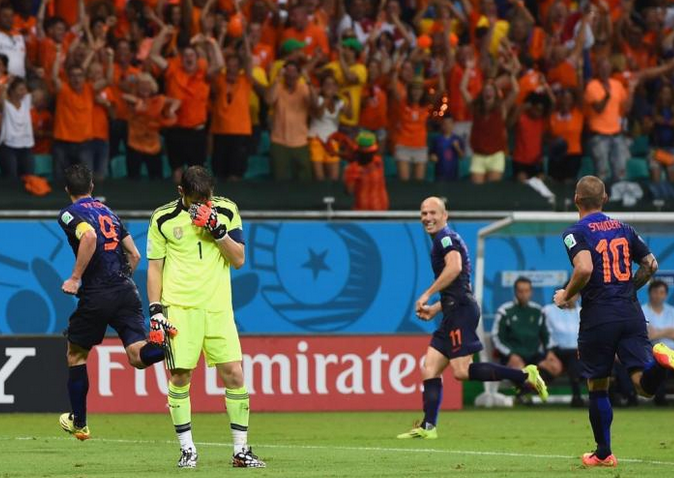 It was nothing short of mayhem in Salvador on Friday as the 2010 World Cup finalists once gain met each other in their first match in the group stage. This time around though the Netherlands had the last laugh as they exposed all the chinks in the Spanish armour and thrashed them 5-1, something that wouldn’t have been foreseen by many World Cup free bets.

Andres Iniesta scored in extra-time to give Spain a 1-0 win and the trophy in South Africa four years ago, and it appeared the same result was on the cards in Salvador when Xabi Alonso powered home a first-half penalty. However, the Dutch bounced back in a dramatic manner with Robin Van Persie and Arjen Robben in inspirational form.

On the stroke of half time Van Persie levelled matters as he literally flew and headed an inch-perfect aerial ball from Blind to score arguably the best goal of the match. Following that, the Dutch continued their form as Robben cut Gerrard Pique in half as he slotted home yet another goal. Things went from bad to worse for the World Champions when Stefan de Vrij nodded home a third on 64 minutes, before Van Persie and Robben netted again to bury the match completely.

Of course, it’s a bit soon to throw roses on the grave and lower this Spanish side into the ground. But goodness, were they outclassed over the last 46 minutes of the match by the Dutch. Amid all the Spanish criticism let’s give Louis Van Gaal’s men the credit they deserve as they stayed mostly disciplined and organised all across the board. With all that said and done, Spain must revamp their squad or face an early exit.

There is no need for a revolution. We did not win but we will move on and try to win the next game.

While they don’t need a revolution, they surely need to freshen things up. Among all the contenders in the World Cup, Spain hands down has the most bench strength, but Del Bosque seems to somehow always turn a blind eye towards all the talent at his disposal and stick with the more aged and experienced operators in his squad.

There had been rumours all week that the former Real Madrid coach would start with Javi Martinez at the back in place of out of form Gerard Pique. However, when it came to the crunch, Del Bosque yet again made a cautious approach and swayed away from breaking the successful partnership between Sergio Ramos and Pique. The Barcelona man was in dire straits, as he was left out of position more often than not. He lost Robin van Persie for the first goal and was also caught in no man’s land for the second  allowing Arjen Robben to cut back inside him far too easily.

Pique was not the only loose string in the once well knit unit; it was probably the first  time in his entire career that Iker Casillas made so many game changing errors in one match. Widely considered as one of the best keepers of all time, the captain failed to deal with an inswinging ball from the left  thus allowing Stefan de Vrij to bundle the ball home. Then, Casillas gifted Van Persie his second of the game with a amateur-ish  first touch inside his own area.

All hopes were on Diego Costa as everyone expected him to inject the much needed versatility in the Spain squad. However, the Brazil-born forward was disappointingly out of sorts for the whole match and never looked settled.  The Atletico man won a controversial penalty from which Xabi Alonso scored but he was an uncharacteristically weak presence up front; his finishing was hilariously wayward. Truth be told, he was lucky not to have been asked to leave the field  having been guilty of a typical show of rage by throwing his forehead in the direction of Bruno Martins Indi.

Veterans like Xabi Alonso and Xavi Hernandez were rendered ineffective by the constant pressing of the Dutch midfielders. It was quite evident that age, to an extent, has extensively slowed down these legendary midfielders. It’s probably high time now to shuffle the lineup and rest these once great servants to Spain with the likes of Juan Mata, Koke, Cesc Fabregas and Javi Martinez waiting in the wings. Fast paced classic wingers like Pedro and Jesus Navas, who was surprisingly left out of the squad, should be included in starting eleven. They have that unique talent of taking on opposition defenders and going past them, using their agility and acceleration. These type of players provide width and a certain unpredictability in an otherwise rigid Spanish squad.

Xavi stated on Thursday that Spain will live or die by their beloved style of play. At the Fonte Nova, they were dealt a near-fatal blow. But tiki-taka is not dead. Not yet. It just needs to be rejuvenated and energised. And quickly. They also better fix their defending woes in a hurry, because Chile will be even more aggressive than the Dutch were. Spain now faces a very real fight just to move on to the knockout phase of the tournament.

Who thought we would be saying that a few days ago?

One thought on “Chaotic Spain must evolve or perish”