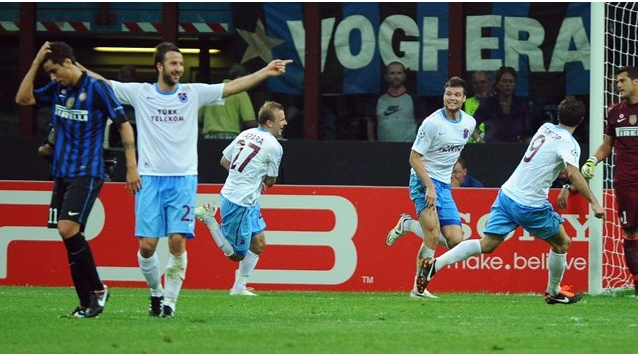 Matchday 1 of the 2011 Champions League is in the bag and there were plenty of talking points from Europe’s premier football tournament including a surprise result at the Camp Nou, a stuttering start from both Manchester sides and another disappointing result from one of Serie A’s big boys. The following are the main talking points from the opening week of the UEFA Champions League.

In Group E Chelsea kicked off their European campaign with a workmanlike 2-0 victory at home to Bayer Leverkusen at Stamford Bridge. Andres Villas-Boas is slowly moulding his new side into a decent attacking outfit and Tuesday night’s result was all the more significant due to the absence of some regular first-teamers. The backbone of Chelsea’s team in recent years has included John Terry, Frank Lampard, Didier Drogba and Nikolas Anelka but none started the Leverkusen tie this week.

Another significant development was Fernando Torres’ hand in both goals for David Luiz and Juan Mata. The Spanish striker has yet to find the target this term but his work rate and unselfish play will have pleased the Chelsea manager and fans. Elsewhere in Group E Belgian side Genk held out for a 0-0 draw at home to Valencia and proved they will be no pushover at the KRC Genk Arena.

A predatory strike from Lucho Gonzalez proved enough to grab all 3 points for Marseille away to Olympiacos in their Group F opener in Greece. It was Olympiacos’ first competitive game of the season and it showed as the Ligue 1 side finished the stronger and were good value for their away win. In the same group Arsenal escaped with a 1-1 draw in the BVB Stadium in Dortmund even though Robin Van Persie netted a cracking opening goal after Theo Walcott slipped him following some poor Dortmund defending.

Borussia are not the reigning Bundesliga Champions for nothing though and bossed the game from the opening minute. Ivan Perisic’s magnificent late volley secured a point, which was the least Jurgen Klopp’s side deserved. On this showing the German Champions look a certainty to emerge from the group while Arsene Wenger (who watched the game from the stands) has a lot of work to do with a new look Arsenal.

Reigning Europa League champions FC Porto began life after the departure of their manager Andre Villas-Boas with a morale boosting 2-1 victory at home to Shaktar Donetsk in the Estadio DeDrago. Star striker Hulk missed a penalty before scoring one of the goals of the season from a 30 yard free-kick.

Luiz Adriano pulled one back for Donetsk before a 51st minute winner from Kleberson secured new Porto Coach Vitor Pereira a winning start in Group G. Apoel Nicosia also recorded a 2-1 win in their Group G opener thanks to two goals in as many minutes from Manduca and Ailton after Zyryanov had broken the deadlock for Zenit St. Petersburg. The visitors had Bruno Alves sent off late on and hit the post in the dying minutes but the Cypriots held on for a memorable maiden Champions League win.

FC Viktoria Plezn and BATE drew 1-1 in Prague in their Group F opening fixture. Marek Barkos opened the scoring in first half injury time but a 69th minute Renan Bressan leveller earned the Belarus side a precious point. The highlight of Matchday 1 took place in the Camp Nou where defending champions Barcelona began the defence of their Champions League crown with a tough home assignment against AC Milan.

The Serie A side stunned the home supporters with a goal inside the opening minute after Brazilian Pato galloped through the Barcelona defence to put his side one up. Lionel Messi setup Pedro for a deserved equaliser after a period of sustained pressure from the Catalans and even though the hosts lost Iniesta to injury a 2-1 win looked secured once David Villa curled an audacious free-kick into the top corner. The Rossoneri refused to accept defeat however and once again exposed a porous Barcelona defence when Thiago Silva rose to thump a header into the net in injury time and earn his side a 2-2 draw.

Manchester City and Napoli served up an entertaining opening to Group A in the Champions League on Wednesday night at the City of Manchester Stadium with both sides having to be content with a point. Eachside rattled the crossbar and upright before Edison Cavani broke the deadlock for the visitors after a lightening breakaway following a Gareth Barry error. Alexsander Kolarov’s beautiful free-kick earned City a merited point but Napoli will be the happier side with an away point in the bag.

Elsewhere in Group A Bayern Munich continued their superb early season form with a hard earned 2-0 victory away to Villarreal. Goals in either half from Rafhina and Toni Kroos completed an excellent night’s work for the current Bundesliga pace setters. Star striker Mario Gomez failed to appear for the second half but Bayern were good value for their opening night win in Spain.

The trouble continues to mount for new Inter Milan manager Gian Piero Gasperini following his side’s shock 1-0 defeat at home to Trabzonspor in their Group B opener at the San Siro. An opening weekend 4-3 defeat to Palermo in Serie A was followed by another lacklustre display on Wednesday evening as Ondrej Celustka’s solitary strike won it for the Turkish side only in the competition because of Fenerbache’s removal because of match-fixing allegations. Inter are in danger of messing up their entire season unless Gasperini can quickly turn things around. If not, expect Inter to be on the lookout for a new coach in the coming weeks.

The other Group B encounter produced an entertaining 2-2draw between Lille and CSKA Moscow in France. Moussa Sow opened the scoring for the French champions with a wonderful back-heeled strike before Benoit Pedretti doubled Lille’s lead in the 57th minute. CSKA staged a remarkable comeback however and a well taken Seydou Doumbia brace earned the Muscovites an unlikely draw.

Manchester United produced a disappointing display away to Benfica in their Group C opener and were lucky to come away with a point following a 1-1 draw in Lisbon. Oscar Cardozo fired in a deserved opener for the hosts but the ageless Ryan Giggs equalised with a left foot thunderbolt just before the break and both sides had to settle for a share of the spoils. The other Group C combatants FC Basel and Otelul Galati produced and entertaining encounter at St. Jakob Park in Basel. The Swiss side won 2-1 thanks to a late penalty converted by Frei.

Real Madrid got their European campaign off to a decent start with a narrow 1-0 victory away to Dinamo Zagreb. Angel DiMaria’s stunning 53rd minute strike earned Jose Mourinho’s side a winning start with the Madrid club playing in an unfamiliar all red strip. The other Group D fixture saw Ajax and Lyon draw a blank following a 0-0 result in the Amsterdam Arena.

One thought on “Champions League – The Week in Review”