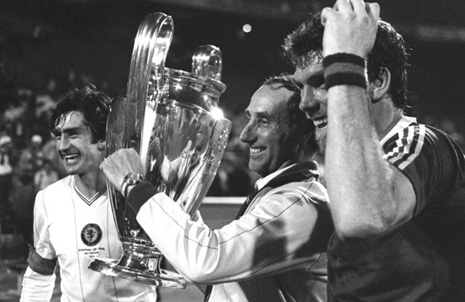 The UEFA Champions League, formerly called the European Cup, has been Europe’s most elite club competition over the last fifty five years. Clubs from ten different countries have managed to lift this coveted trophy. More often than not, the winners of this glamorous tournament have been the expected clubs, the best of the best. Yet, on a few rare occasions, a completely unfavoured team has risen from obscurity to etch their names on this awe-inspiring trophy.

Here is a look at the five most unexpected Champions League winners since the tournament’s inception in 1955.

The United Kingdom was in the shadows of other footballing nations like Spain, Portugal and Italy until that special year, 1966. This was a breathtaking year for two countries from the United Kingdom, namely England and Scotland. England most memorably won the World Cup in July 1996, while Celtic became the first club from the UK to win Europe’s top club competition.

Celtic were at their attacking best, as they easily disposed of Zurich in the first round and then demolished Nantes in the following round, managing to score a total of 12 goals in four games. The quarter final proved to be a much harder hurdle to pass. Drawn against Yugoslavian side, Vojvodina, Celtic were very close to being knocked out. A 1-0 loss at Novi Sad was shcokingly overturned in Scotland thanks to a 90th minute winner. They faced yet another Eastern European side in the semi final, Dukla Prague. The tie was settled in Glasgow as Celtic picked up a resounding 3-1 win. Celtic played out the second leg without too many problems, denying the Czech a goal. The finals saw Celtic lock horns with one of Europe’s best, Inter. With Helenio Herrera’s cattenacio having been an impenetrable wall throughout the tournament, it seemed that Celtic would be in for a rough night. Yet, against all odds, the Scots rose to the occasion, bringing down the Italian barricade. A memorable 2-1 win for Celtic, earned them their first, and last, ever European Cup.

The Dutch national team was yet to reach its glory days. Football within the Netherlands was far from what it is today. Total Football, Johan Cruyff and Rinus Michels were still relatively unknown across Europe. Dutch football’s first attempt at European success came in the 1968/69 season, when Ajax reached the finals of the European Cup, only to lose 4-1 to Italian giants, Milan.

Feyenoord may have had a good reputation within the Netherlands, but were still fairly anonymous outside the counter. The 1969/70 European Cup triumph was Feyenoord’s gateway to fame. Their most sensational moment from this campaign was the 2-1 aggregate victory over defending champions Milan, a tie in which they overcame a 1-0 loss at the San Siro. Feyenoord powered past Scottish champions Celtic in the final, by a 2-1 scoreline. After being tied at a goal apiece, club legend Ove Kindvall scored the winner in extra-time to crown Feyenoord the champions of Europe.

When one talks about European success and English football, the names that would most commonly be brought up are Liverpool and Manchester United, and maybe more recent contenders like Arsenal and Chelsea as well. One name that would almost surely never arise is Aston Villa. Although their recent inability to succeed may overshadow their sole European triumph, time shall never erase this sensation. Here is a look at Aston Villa’s remarkable European Cup journey from the 1981/82 season.

In their debut campaign in the tournament, Tony Barton’s Aston Villa disposed of the likes of East Germany’s  Dynamo Berlin, Soviet Union’s Dynamo Kiev and Belgian side Anderlecht, en route to the final.  Dynamo Berlin proved to be the hardest of all of these opponents, as the English side relied on away goals to sneak through to the quarter finals. They met three time winners, Bayern München in the finals. Boasting of a squad consisting of the likes of Karl-Heinz Rummenigge, Paul Breitner and Klaus Augenthaler, the Bavarians were clear favourites in this tie. Dominated throughout the game, Villa managed to keep the scoreline level thanks to second choice keeper, Nigel Spink’s, heroics until the 67th minute. It was in the last half hour of the match that Peter Withe managed to break the deadlock and seal Villa’s first ever European Cup triumph.

Born in the Socialist Federal Republic of Yugoslavia, Red Star Belgrade had been regular participants in the European Cup right from the 1950s. Although they did reach the semi-finals on two occasions prior to their triumph in 1991, the Crveno-beli were never considered a force to reckon with in Europe.

After having eliminated Swiss side, Grasshopper FC, and then Rangers, Red Star ran into the volatile Dynamo Dresden. In the first leg, played in Belgrade, the hosts came out 3-0 winners as they ran riot against the Dresden defence. In the return leg, the game was poised at 2-1 to Red Star, courtesy a sensational solo effort by Dejan Savićević, when Dresden fans began to riot. The game was called off and a 3-0 victory was awarded to Red Star. For the semi finals, the Yugoslavs were drawn against West German champions, Bayern München. Red Star picked up a huge victory at Munich, with Savićević scoring the winner an clinching the game. In Belgrade. Bayern managed to pull things back and level the tie at 3-3 on aggregate, but their hopes and dreams were shattered when Klaus Augenthaler scored a 90th minute own goal. Red Star had reached their first ever European Cup final and were to face French champions Marseille. Both teams played an extremely defence minded game, playing out a goalless ninety minutes and thirty minutes of extra time. Manuel Amoros’ missed penalty finally gifted Red Star Belgrade their first, and last, ever European Cup.

The only victors in this list who managed to win the tournament after its reshaping. Having to go through a group phase and a knockout phase made it a great deal harder for the smaller teams to win the Champions League post 1990. Surprisingly, Jose Mourinho’s Porto managed to pull off this remarkable feat in the 2003/04 season.

The Portuguese side were drawn into a group consisting of Real Madrid, Marseille and Partizan.  Overcoming Real Madrid proved an impossible task, but Porto did manage to qualify for the knockout stage as they finished ahead of Marseille and Partizan. Their next big problem came in the form of two-time champions Manchester United. After an exhilarating 2-1 win at the Estádio do Dragão , Porto were on the edge at the Theater of Dreams, when Manchester United were leading on away goals from the 32nd minute of the game. But a dramatic 90th minute goal from Costinha pulled Porto a goal ahead on aggregate and sealed their place in the quarter finals.  Porto sent Lyon crashing out of the tournament with a 4-2 aggregate win in the quarter final and booked a semi final tryst with Spanish side, Deportivo La Coruña. After a cagey goalless draw in Portugal, Porto looked desperate to pick up an away goal in the second leg. They reaped great dividends for their attacking attitude, as they scored the only goal of the game, thus sealing their place in the final. Another unlikely team had managed to squeeze their way into the finals of the Champions League, AS Monaco. Unlike many of the finals in the past, this was a complete rout as Porto won 3-0, thanks to goals from Carlos Alberto, Deco and Dmitri Alenichev. This was Porto’s second Champions League victory, their first after the rechristening of the tournament.

This year’s edition of the tournament has already seen its fair share of surprises. Basel knocked out Manchester United, while APOEL and Napoli managed to qualify from two extremely hard groups.In the first leg of  the round of 16,  Basel and Napoli managed to pick up home wins against Bayern and Chelsea respectively. APOEL lost to Lyon at home but are more than capable of making a comeback in Cyprus. Could we see one of these clubs go on to lift the 2011/12 UEFA Champions League? Only time will tell.