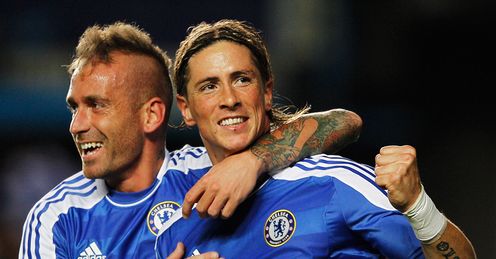 Matchday 3 of the Champions League concluded on Wednesday night with a big win for Chelsea at Stamford Bridge and a fortunate away victory for Arsenal in the south of France. APOEL continued their fairytale European campaign with a creditable draw in Portugal while it was business as usual for Barcelona and AC Milan.

Chelsea maintained their position at the summit of Group E with a powerful display to see of Belgian side Genk at Stamford Bridge. Fernando Torres grabbed all the headlines by ending a drought of 875 minutes since the Spanish international last scored in the Champions League (stat from Opta Sports) in a comfortable 5-0 victory.

Raul Meireles broke the deadlock with a cracking long range drive and then Frank Lampard found Torres in space allowing the striker to slip a delightful effort into the net for a 2-0 lead. The Premier League side were guilty of wasting a series of goal scoring opportunities before Torres bagged his second just before the half hour with a glancing header at the near post to guarantee the 3 points.

There was still time for a fourth goal just before the interval with Ivanovic rising highest in a crowded penalty area to plant a header into the net from an in-swinging Malouda free-kick. The Pensioners took their foot off the gas in the second half allowing Genk welcome periods of possession following a torrid opening 45 minutes. Malouda was on hand to score the fifth and final Chelsea goal in the 70th minute after Fernando Torres was denied a hat-trick by a reflex save from Genk goalkeeper Koteles.

Bayer Leverkusen came from 1-0 down to inflict a first Champions League loss of the season on Valencia at the Bay Arena. The Spaniards dominated the opening 20 minutes playing with confidence and stretching the Leverkusen defence with some incisive attacks.

The two Valencia strikers combined in the 24th minute to open the scoring following a dominant period with Soldado releasing Brazilian forward Jonas who placed a fine shot past the stranded Leno for a merited 1-0 lead.

Leverkusen remerged a different side in the second half and were rewarded for the increased efforts with a deserved equaliser after 52 minutes when Andre Schurrle netted his second Champions League goal in as many games with a venomous strike from the edge of the area.

The German sides’ comeback was complete four minutes later when Sidney Sam brushed past a defender before unleashing a beautiful left-foot effort into the net to win it 2-1 for Leverkusen.

Group E – Matchday 4: Valencia vs. Bayer Leverkusen the Estadi De Mestalla and Genk vs. Chelsea in the KRC Genk Arena.

Arsenal left it late but an injury-time goal from Aaron Ramsey secured a narrow 1-0 victory over Marseille in the Stade Velodrome following the dullest of encounters.

The opening half saw two sides cancel one another out in a timid 45 minutes play that contained plenty of encouraging attacking but neither side able to unlock their opposing defence. Arsenal dominated possession but lacked a killer instinct in the final third as Marseille grew in confidence with each passing minute.

Theo Walcott missed a great chance in the 64th minute in a one on one with goalkeeper N’Kolou who did just enough to thwart the English international from 6 yards out. Both sides looked ready to settle for a point until the introduction of Aaron Ramsey by Arsene Wenger changed the final outcome.

Djourou curled an inviting ball into the penalty area which Gervinho missed but Welsh international Ramsey was quickest to react to. The midfielder steadied himself before firing into the bottom corner of the net to win it 1-0 for Arsenal.

Olympiacos consigned Borussia Dortmund to their second Champions League defeat of the season leaving the German side rooted to the bottom of the Group F table. Ivan Marcano’s cross was met with a bullet header from Jose Holebas to hand the Greek side an early 1-0 lead.

Dortmund regrouped well having fallen behind so early and Jurgen Klopp’s side levelled matters in the 26th minute with a well worked equaliser. Mario Gotze and fellow striker Robert Lewandowski combined brilliantly to allow Lewandowski fire home a delightful shot to make it 1-1.

Olympiacos’ Rafik Djebbour restored the Greek side’s lead shortly before the half time interval with a clinical finish past Roman Weidenfeller and a second half header from Francois Modesto secured a memorable 3-1 win.

Group F – Matchday 4: Arsenal vs. Marseille in the Emirates Stadium and Borussia Dortmund vs. Olympiacos in the BVB Stadion in Dortmund.

Cypriot side APOEL remain top of Group G following a magnificent point away to Porto on Wednesday evening. The Portuguese side’s star striker Hulk broke the deadlock after 13 minutes direct from a free-kick and Porto looked set for an easy win. APOEL are made of sterner stuff however and demonstrated the resolve that had garnered win and draw prior to Matchday 3 to level the score in the 20th minute.

Ailton scored a wonderful equaliser from 25 yards in his side’s first meaningful attack and that effort was enough to secure the Cypriots a precious away point and keep them top of the table heading into Matchday 4.

Neither Shakhtar Donetsk nor Zenit St. Petersburg was able to capitalise on Porto’s slip at home to APOEL after playing out a 2-2 draw in the Donbass Arena. Willian fired the home side 1-0 ahead on the quarter hour mark to celebrate his return from a long-term injury.

Zenit’s Shirokov tied the score after 33 minutes netting from the tightest of angles to make it 1-1 and the sides looked set to go in 1-1 at the break until  Luiz Adriano intervened in first half injury time to push Shakhtar back in front.

Viktor Fayzulin executed a beautiful chip from 25 yards out to draw the St. Petersburg club level on the hour and an entertaining encounter finished 2-2 which was a fair reflection on the 90 minutes.

Group G – Matchday 4: Zenit St. Petersburg vs. Shakhtar Donetsk in the Petrovski Stadion in St. Petersburg and APOEL vs. Porto in GSP Stadium in Nicosia.

Both Barcelona and AC Milan gained their expected Group H wins on home soil Wednesday evening but not in the easy manner expected by many of their fans. The Camp Nou was the setting for FC Viktoria Plezn’s daunting trip to take on Champions League holders Barcelona. The Czech side had only a point to show for their opening two group matches and looked in real trouble when Iniesta opened the scoring after 10 minutes.

Barcelona produced one of their trademark slick passing moves to carve open the Plezn defence with Lionel Messi on hand to provide the assist for the in-rushing Iniesta who danced around a defender before firing into the bottom of the net. From that moment onwards the Catalan club completely dominated possession (over 70%) but failed to add to their total through a combination of poor finishing and committed Plezn defending.

Lionel Messi remained the Czech club’s chief tormentor by rattling an upright with a free-kick and dribbling through the visitors’ defence on numerous occasions. Plezn struggled to get out of their own half for much of the game but Barca’s inability to score a second and decisive goal meant for an unnecessarily uncomfortable second half.

The match-winning goal finally arrived in the 82ndminute when David Villa pounced on a loose ball on the edge of the box following another Messi dribble.

AC Milan remains joint-top of Group H alongside Barcelona following a hard-fought 2-0 win at home to BATE Borisov in the San Siro. The Belarusians were forced to defend or much of a one-sided first half with the interplay of Prince Boateng, Cassano and Abate a joy to behold from the Italians.

BATE goalkeeper, Gutor, had a busy evening between the sticks for the visitors but managed to repel the Milan attacks until the 33rd minute when star striker Zlatan Ibrahimovic walloped home an unstoppable effort. The 25th goal of Ibrahimovic’s Champions League career settled Milan after the Serie A side had survived a scary moment just before the opening goal when goalkeeper Abbiati made a heroic point-blank stop.

BATE wasted another glorious chance seconds after the restart when Renan Bressan volleyed over the bar with the goal at his mercy. Milan retook control after that scare and their second and match-winning goal arrived in the 70th minute. Kevin Prince Boateng controlled a pass and smashed a cracking drive in off the crossbar to win it 2-0 to the delight of the San Siro faithful.

Wednesday night’s results leave AC Milan and Barcelona joint op on 7 points apiece meaning victory for either side on Matchday 4 will guarantee safe passage into the knockout stages. BATE and Plezn are left to battle it out for a Europa League spot.

Group H – Matchday 4: BATE vs. AC Milan in the Dinamo Stadium in Minsk and Plezn vs. Barcelona in the Eden Stadium in Prague.