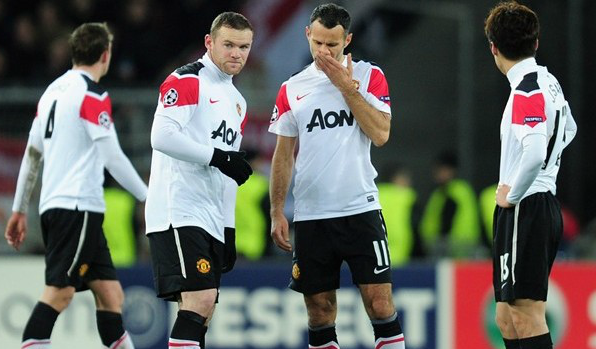 Wednesday night’s final round of group fixtures turned out to be the most dramatic evening of this season’s Champions League thus far with Manchester City and Manchester United exiting the competition and Lyon pipping Ajax to a place in the last sixteen in the most spectacular fashion.

Following Tuesday night’s insipid displays it was left to the likes of FC Basel and CSKA Moscow to write their own headlines with shock victories at the expense of Manchester United and Inter Milan and qualify for the knockout phase.

The second round clashes of this year’s Champions League beginning in the New Year will have an unfamiliar look now that Italy and not England is the most represented European league. Could this be the season an outside bet wrestles the coveted trophy away from Barcelona’s grasp?

Manchester City gained their expected win at home to an under strength Bayern Munich at the Etihad Stadium on Wednesday night but the victory proved in vain as Napoli won away to Villarreal in the other Group A encounter to end Roberto Mancini’s side’s interest in this season’s Champions League.

City began well on their home patch forcing Bayern to defend deep but it wasn’t until the 14th minute that the Premier League side created their first decent opening. David Silva curled a majestic effort into the top corner only for the effort to be ruled out for an infringement by Joleon Lescott. Munich began to make inroads on the City defence before David Silva broke the deadlock with a cracking strike in the 36th minute. The diminutive midfielder chested the ball down on the edge of the box and sent a smashing effort into the bottom corner.

YaYa Toure cemented City’s victory with a well worked goal in the 52nd minute after linking up with Dzeko before poking the ball underneath the body of the advancing Bayern goalkeeper Butt. 2-0 and Manchester City were good value for their lead. The Poznan crowd celebration was in full effect until word filtered through of Napoli’s win in Spain. The atmosphere was instantly killed with news of the Italian’s victory and Mancini had to console himself with the fact Man City are the first team since 2007 (Werder Bremen) to earn 10 points and not qualify from their group.

Second half strikes from Gokhan Inler and Marek Hamsik secured Napoli’s safe passage to the knockout stages of the Champions League for the first time ever. Inler broke the deadlock after 65 minutes with a rasping long range effort following a scoreless first half highlighted by a tenacious Villarreal performance. The Spaniards had little to play for but were dogged in closing down Napoli at every opportunity until the opening goal flew in.

The tie was over as a contest once Hamsik netted from close range with 15 minutes to go as Napoli celebrated a terrific achievement in reaching the last sixteen of the competition and will be a difficult opponent for whichever seeded club draws the talented Italian club.

The final night of action in Group B produced even more drama with three clubs in the running to accompany Inter Milan into the knockout phase as the Italians hosted CSKA Moscow and Lille entertained Trabzonspor in France. A scoreless opening 45 minutes at the San Siro saw Inter and CSKA cancel one another out until the Russians broke the deadlock five minutes after the break.

Inter were made to pay for their first half profligacy in front of goal when Seydou Doumbia collected a pass from fellow striker Vagner Love before sending a beautiful effort past Castellazzi in the Inter goal to make it 1-0 . The Serie A side were level within a minute of falling behind however as Esteban Cambiasso bundled the ball over the line from a rebound after Andrea Ranocchia’s initial effort was saved.

The Russians looked to be heading out of the competition after Inter had rattled the crossbar until Vasili Berezutski connected with an Aleksander Cauna corner-kick four minutes from the end to earn Moscow a dramatic 2-1 victory. That late goal coupled with Lille and Trabzonspor playing out a 0-0 draw in the other Group B fixture meant CSKA Moscow qualified for the second round as group runners-up.

Manchester United failed to qualify from their Champions League group for only the third time in the club’s illustrious history following a dramatic night at St. Jakob Park where home side FC Basel recorded a merited 2-0 victory. Sir Alex Ferguson will have to alter his plans to take in Thursday night Europa League action for the first time since United last failed to make the knockout stages during the 2005-06 campaign.

Make no mistake FC Basel fully deserved this historic win which takes the Swiss club into the latter stages of the Champions League for the first time. The hosts grabbed a shock lead after 6 minutes had elapsed when David De Gea and the United defence failed to adequately deal with a cross and Marco Streller pounced to send his volley into the ground before bouncing high into the roof of the net for an early 1-0 lead.

Wayne Rooney missed a glorious chance to level matters on the half hour but the England international fluffed his opportunity with the goal gaping after good approach play from Nani. United lost the services of Nemandja Vidic to a serious knee injury to further compound their problems. Despite creating a plethora of chances before and after the half time break FC Basel’s defence remained resolute with goalkeeper Yann Sommer particularly impressive.

Further up the park Xherdan Shaqiri tormented an overworked United back four and Basel made the visitors pay for their lacklustre performance when Alexander Frei took advantage of more shoddy defending to fire home from close range and send the home supporters wild with delight. Phil Jones headed home a minute from time but it proved a mere consolation and FC Basel will proudly represent Switzerland in the knockout phase of this year’s Champions League.

Benfica solidified top spot in Group C and became a seeded club for the second round draw courtesy of a narrow 1-0 victory at home to Otelul Galati in Portugal. Óscar Cardozo scored the only goal of a tense encounter after 7 minutes and although each side had chances to score before the full time whistle eventually blew Benfica went through as Group C winners.

Real Madrid concluded their Champions League Group D fixtures with a sixth consecutive victory but the real headline grabbing story of the night was Ajax failing to finish in second place after Lyon recorded a remarkable 7-1 win away to Dinamo Zagreb to take their place in the second round on goal difference.

Jose Mourinho’s side warmed up for this weekend’s El Classico by taking a first half lead in the Amsterdam Arena through a Jose Callejon effort on the quarter hour mark. Ajax fought back impressively but had two goals disallowed before second half strikes from Gonzalo Higuaín and a second Callejon strike secured a 3-0 win for the Spanish giants.

Lyon began the night three points behind Ajax but with a much worse goal difference. The Ligue1 side took advantage of a dismal Dinamo Zagreb display to race into a 3-1 first half lead before taking control of proceedings in the second period and rattling in an additional four goals.

Lyon’s Bafetimbi Gomis went into the history books after scoring the quickest ever Champions League hat-trick and added a fourth for good measure on the way to his side’s victory. Dinamo’s worst night in European football ended with their manager Krunoslav Jurcic getting sacked. Jerko Leko’s dismissal early in the first half compounded Dinamo’s problems although the hosts actually managed to take the lead through Mateo Kovacic 5 minutes before half time.

Enter Gomis with four spectacular goals and then additional strikes from Lisandro Lopez, Maxime Gonalons and Jimmy Briand that meant Lyon turned around a seven goal goal-difference with Ajax to book their place in the last sixteen in the most dramatic fashion.