Following a 3-1 home loss to Aston Villa, on New Year’s Eve, Andre Villas-Boas conceded that his Chelsea side were now out of the Premier League title race.

By the Portuguese manager’s admission, it seems impossible for any team to compete with the Manchester clubs, in the immediate term – even in light of United and City’s own inconsistent form, over the seasonal period.

Chelsea, the former three-times Premier League Champions, will, instead, focus on the longer-term vision of rebuilding an ageing squad. When Chairman Roman Abramovich appointed Villas-Boas, in June of last year, it seemed apparent that the club’s braintrust had foreseen that a longer-than-usual road, to success, would lay ahead.

In his first half-season in the English game, Villas-Boas has already set about remoulding the Chelsea team in his own image. Unlike his predecessors; Avram Grant, Guus Hiddink and Carlo Ancelotti; Villas-Boas has bravely broken away from the defensively-minded, physical, direct-football legacy of Jose Mourinho. In doing so, the 34-year-old has pioneered a creative, progressive, short-passing style.

As a by-product of this philosophy, Chelsea’s most effective players, of the season so far, have included youthful, technically-gifted individuals, with relatively-low tabloid profiles; such as Oriol Romeu, Daniel Sturridge and Juan Manuel Mata. 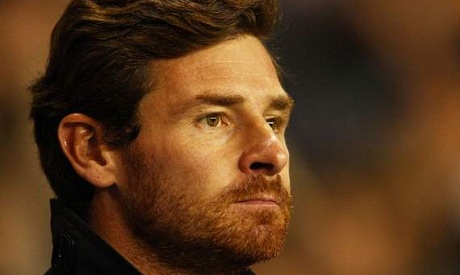 Villas-Boas must “clear the decks”, as Chelsea weather the Mancunian storm.

The notoriously difficult Nicolas Anelka has been shipped off to Shanghai, the unshapely Alex is on his way out and there are strong rumours circulating, regarding high-status pillars of the Mourinho-era Chelsea institution. Frank Lampard and Didier Drogba have both been linked with moves to nouveau-riche foreign leagues and, unthinkably, the standing of iconic skipper John Terry has even fallen under question. Blues legend Vinnie Jones went so far, in a BBC interview, as to compare Terry’s never-ending moral saga with Manchester United’s, 2003, ‘Beckham vs. Ferguson’ storyline. Ominously, from Terry’s perspective, Jones employed the phrase “clear the decks”.

Although, perhaps, not accused of adultery and race crimes, nor “difficult” nor “ageing”, one example of Chelsea deadweight seems to have avoided the media sonar, when it comes to the subject of deck-clearing.

At the peak of his powers, the Czech Goalkeeper was regarded as the best in the world, by mentor Mourinho.

Picked up for a bargain £7m, after being rated as the top ‘keeper of Euro 2004, Cech was instrumental in Chelsea’s march to back-to-back league titles. Indeed, in only his first season in the English game, he set a clean-sheet record, racking up an unbeaten 1,025 minutes of playing time. In his second season, at the age of 24, he conceded only 22 goals.

However, the 6’5” giant’s performances have been in gradual decline, ever since his infamous head injury, of October 2006. According to his doctors, Cech was lucky to escape alive, from a collision with, then-Reading midfielder, Stephen Hunt’s knee.

Despite being diagnosed with a fractured skull and post-traumatic amnesia, Cech, perhaps in an error of judgment, returned to the fold only three months later. 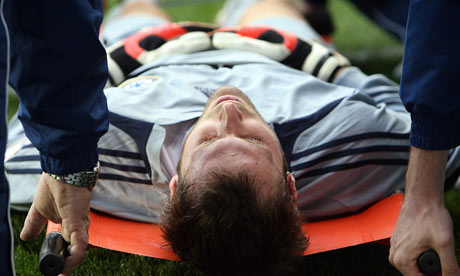 Cech is stretchered from the field, following his near-fatal collision with an opposing player.

We are now in January 2012 and the vulnerable Cech still wears the protective headgear, that enabled his early return, despite the fact that doctors gave him the all-clear to remove it, many years ago.

Over the course of the past five years, Cech has largely failed to match the consistency of his first two seasons at Chelsea. At times, brilliant but just as often tentative, by compensating for his past head injuries, Cech has, ironically, led himself to become increasingly accident prone. His trademark scrum-cap has been, periodically, accompanied by a variety of accessories, including chin-protectors and face-masks, as the injuries have racked up for the embattled custodian.

Injuries haven’t been the only mishaps to befall Cech, since his apparent loss of confidence. The erratic number one has dropped a series of clangers, in recent seasons, with their frequency rising, drastically, during this past calendar year.

February 2011: Failed to collect a Steven Gerrard cross, allowing Raul Meireles to volley Liverpool to a 1-0 win, at Stamford Bridge.

October 2011: Directly at fault for three of the goals, in a 5-3 home defeat against Arsenal.

Petr Cech showed immense bravery, in continuing his top-level career, after his life-changing incident at the Madejski Stadium. His commitment to the cause could go some way to explaining his extended stay of execution, at Stamford Bridge. Sadly, there’s little room for sentiment in football and, in 2011, Cech’s world-class goalkeeping reputation, once and for all, became a thing of the past.

The Eastern European has only a handful of clean sheets to his name, so far this season, and, with the situation coming to a head, in this writer’s opinion, it may be time for Andre Villas-Boas to identify an able replacement.