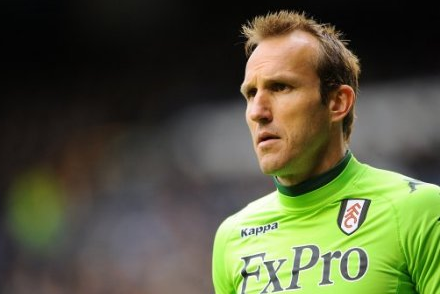 It is certainly a long way from the Colo Cougars in Richmond, New South Wales to Stamford Bridge for Australia’s goalkeeping guru Mark Schwarzer, but in his opinion he still feels he has the game to challenge current incumbent Petr Cech for the number one position at Chelsea F.C.  The one thing that he may find difficult is re-wiring his brain from driving to The Bridge each day instead of the more familiar riverside Craven Cottage.

As we all know that things at Chelsea are always about as static as a cheap nylon rug, so there are no certainties that Schwarzer will see much game time in the first team, knowing that Cech has been an instrumental figure in trophy success for “The Blues”. One of the huge variables in Chelsea’s ongoing football equation is their innate ability to throw reason and common sense thinking out the window along with mountains of European currency. The return of the “Special One” José Mourinho will obviously see the potential for a shake up of team lists as he looks to stamp his own unique mark back on the club he has had so much success with.

The big question is will Mourinho tinker with things in the six-yard box? His time at Real Madrid saw a much-publicised fall out with arguably the best keeper in world football Iker Casillas and sparked the beginning of the end of his tenure at the Bernabeu. I’m sure he will be keen to avoid too much controversy and personality clashes, but as it is Jose Mourinho, headlines tend to follow him around like a bad smell. It will be no different as he returns to gold fish bowl world of the Premier League.

Let us look at how last year’s stats measured up between the two glove men and see if any can assist Schwarzer in gaining any game time over his dressing room rival Cech.

Both keepers played 36 games in the EPL last season with Cech dominating in the wins department with comprehensive 22 to 10. Cech’s healthy clean sheet tally of 14 also out shadowed the fine efforts of the ever-consistent Schwarzer, who recorded eight for the Cottagers. Schwarzer was certainly the busier of the two at the coalface having to deal with more than a hundred more shots than Cech.  Even standing back to back, both men stand at the same height with only Cech gaining the slightest advantage courtesy of his easily recognisable protective headpiece. One stat that any keeper in the world would love to own is Cech’s Premier League record for the fewest appearances required to reach 100 clean sheets. He brought up that little milestone in only 180 appearances. A stat guaranteed to make any keeper stand up and notice.

Stats always need to be put into perspective as the numbers don’t always indicate what the keeper is seeing in front of him. For Chelsea, Cech has the benefit of a defensive line that boasts the likes of Terry, Cahill, Luiz and Ivanovic. I wonder if Schwarzer had that sort of cattle ahead of him at Craven Cottage just how more balanced the stats would be.

For now Schwarzer will be in unfamiliar territory as the obvious second choice keeper, but it is widely known that Mourinho never talks in those terms and prefers to promote his cattle as equals in order to squeeze out as much competition for the every position as possible. In the Premier League it has never been about simply managing the first team but the entire squad and the ups and downs of form, failure, fatigue and fame. Something that is even more difficult to do at Chelsea given the enormous ego of their wealthy owner Roman Abramovich.

Back in Australia there are many who see Schwarzer’s move to Chelsea as a step backward in his preparations for Brazil and are also calling to now deliver the succession plan for his eventual replacement. For now his record speaks for itself at international level and there wouldn’t be many Australian keepers that would challenge his service as well as his results.  Personally I would like to see the FFA invest more dollars into finding out they can have Schwarz cryogenically frozen or at the very least pass on some of his goalkeeping DNA so that our goalkeeping stocks remain healthy for many more World Cup campaigns to come.