Manchester City’s defence has been much criticised this season, with high profile mistakes from key players and a general lack of solidity appearing to cost them in the most significant moments.

However, at the end of a period in which City slipped out of the Champions League and dropped numerous points in their pursuit of a top four spot, Pep Guardiola once again refused to point the finger at his back line, instead claiming that his side’s chief problem is simply that they do not take enough of their chances.

In his opinion, an improved conversion rate would be enough to fix his side’s issues.

Of course, as a result there are any number of betting sites that would take a bet on Manchester City conceding away against Southampton this weekend – with Guardiola’s side having shipped 35 goals this season, 13 more than second-placed Spurs.

The City manager’s absolute focus on the attacking side of the game is undoubtedly admirable.

Football is, after all, about entertainment and there can be no doubt that fans want to see goals. Fans of the Premier League’s elite, however, also want to see their side lifting trophies at the end of the season.

And here lies the question: is Pep correct to think that an increased conversion rate from his forwards will be enough to succeed in the Premier League? Can ruthless sides thrive without being solid at the back?

Or, as Liverpool found under Brendan Rodgers in 2013/14, will a leaky defense eventually cost you in this most competitive of leagues?

One thing that we can be sure of is that the Premier League appears to be becoming more goal-filled than ever.

There have been an average of 2.84 goals per game so far this season, higher than any other in the last decade.

Only three sides are currently averaging less than one goal against per game, and in Romelu Lukaku, Diego Costa, Harry Kane, Alexis Sanchez and Zlatan Ibrahimović we look set to have more players break the 20 goal mark than in any season since 2009/10.

If we look at the current Premier League table, however, it becomes clear that, in general, having a strong conversion rate does not guarantee success.

Chelsea’s conversion rate is the strongest in the league, with 20.9% of their shots finding the back of the net.

The next best conversion rates, however, currently sit in third (Liverpool), sixth (Arsenal) and seventh (Everton), and whilst Swansea have a significantly better rate than Manchester United, they currently sit 13 places and 29 points behind them. 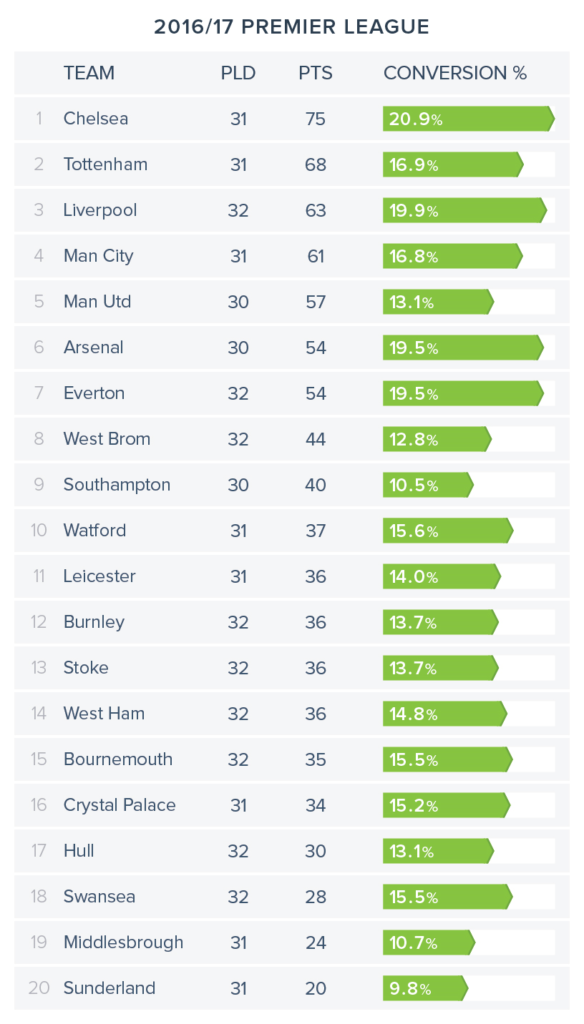 This is a trend that continues when looking back at previous seasons.

Ultimately, the stats tell us that a high conversion rate does not necessarily guarantee success in the Premier League.

In fact, it could be argued that the polar-opposite focus is more likely to bring success.

In this year’s Premier League, the two sides with the most clean sheets currently sit in first and second position, whilst the sides with the fewest occupy three of the bottom four spots.

When looking at the graphic below, it’s clear to see the correlation between clean sheets and league position.

Again, this trend continues when looking back. Since 2006 only eight sides have managed to keep 20 or more clean sheets during a season, and each one of them has finished within the Premier League’s top three.

Only Manchester United’s class of 2015/16 have kept 18 clean sheets in the last and failed to gain a top four finish.

Ultimately, it would be wrong to suggest that Guardiola is completely incorrect in his belief. Of course a City side that scores more goals will have a better chance of taking top spot.

But history suggests that a focus solely on attacking prowess is unlikely to yield the rewards in the Premier League, and the sooner Pep realises the value of a Premier League clean sheet, the sooner he’ll have that coveted trophy in his hands.