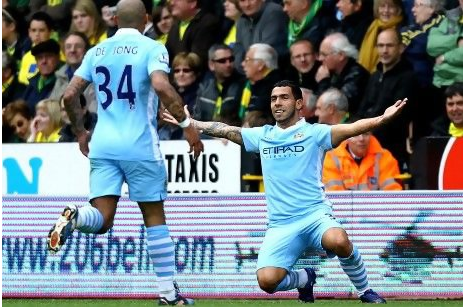 Carlos Alberto Tevez, at 28 years of age he is one of the best footballers on the planet. He’s experienced too, having played professionally for five different clubs in three different countries, as well as winning over 50 caps for his native Argentina. Carlos has also racked up over 150 club career goals, sounds almost perfect doesn’t it? But nothing’s perfect in football, especially for Tevez, for the bulk of his career he has been at the centre of footballing controversy.

The Argentinian forward started his professional career with Boca Juniors at the age of 16. During his time at Boca Juniors, Tevez won four trophies, as well as Argentine Footballer of the Year two years running (2003 and 2004). Obviously all this success wasn’t just swept under the carpet by the bigger clubs, and early on in 2005 Tevez had signed for one of the Brazilian giants, Corinthians.  It was obvious to everyone, Tevez included, that he would eventually leave South America and play his trade elsewhere among Europe’s elite.  That’s when he joined West Ham, not exactly Europe’s elite, but that’s where the controversy all began…

At West Ham, Tevez made a big impression, and put himself in the shop window for the bigger clubs after showing off his fortune of talents. His goals for The Hammers helped them secure Premier League football for another season as they finished three points and three places above the drop-zone. What made this all a bit controversial was that he [arguably] shouldn’t have been playing for West Ham in the first place, as his signing (along with fellow countryman Javier Mascherano) “breached Premier League rules” and resulted in West Ham receiving a fine.

“If I can play at West Ham in such a difficult position, it’s easier to play for a bigger club with players such as Rooney, Ronaldo or Drogba,” said Tevez to the Daily Mail in 2007, whilst The Hammers were battling relegation.

After glowing performances Tevez departed the club to join Manchester United which is where he proved he was more than capable of playing amongst Europe’s elite. During his time at Man United he chalked up 34 goals in 99 appearances, but before he could top a tonne, he decided enough was enough and he wanted to leave United and crossover to the blue side of town. The reason his time at United isn’t covered that much is because there is nowhere near as much controversy in that section of his career, despite being dropped numerous times by Ferguson and continuously putting his future at the club in doubt. Man United procrastinated over signing him permanently, and eventually that backfired as Tevez voiced his displeasure at Man Utd and spoke out about wanting to leave.

“If Carlos had been offered a contract six months ago at United he wouldn’t have hesitated [to sign it],” said agent Kia Joorabchian to the BBC in 2009, during Tevez’ move to Manchester City.

This takes me back to the Hammers, and the financial burden Tevez and his agent Kia Joorabchian had imposed on the club.

West Ham also had to pay £4million compensation per season for five seasons to Sheffield United, who felt they were unfairly relegated due to Tevez keeping West Ham up at their expense. Carlos’ transfer fee to West Ham remains undisclosed, but if you add that to the £20million compensation and the £5million fine, and take into account his wages, he has probably cost the club in excess of £40million. That’s a lot of money, and some fans of the Hammers find that a difficult to live with, but then without Tevez, they may have been playing Championship football for the 07/08 season.

Back to Manchester now: In 2009 Tevez completed a contentious move to Manchester City from their crosstown rivals. The media, pundits and football fans started to label him as a footballing mercenary, and rightly so. But all this was pushed to one side when he ended his debut season with the Citizens, scoring a remarkable 29 goals in 42 appearances. This resulted in Carlos being awarded the captains armband, or what will later been seen as: leverage over the club.

“If I have my way he will be out of the club. He refused to come onto the pitch.”

This is Roberto Mancini speaking to The Sun about Tevez after he had a pitch-tantrum and refused to come on as a sub in City’s 2-0 defeat to Bayern Munich earlier this season. As a result, the club disciplined him, banning him from playing and training indefinitely, he was also stripped of the captaincy.

Tevez claimed Mancini treated him like a dog, but if your job is to run around a field chasing a ball, you can’t really argue otherwise.

Anyhow, after a string of unsuccessful results, and the ever-consistent Man Utd in top gear, City found themselves several points adrift of Man Utd. They needed something, someone to step in and give them that extra boost for their final title push. Cue Carlos Tevez, could he be the driving force for City? Could he revive the team in time? We’ll find out come the end of the season, but for now, it seems as if he’s doing alright.

One of the problems with his return to the team is that he knows just how much he means to the team – they can’t seem to live without him. This is not because he’s the former captain, but because of his unrivalled skill on the pitch. This season Man City haven’t lost a single game that he has played in – apart from Arsenal away, and with his recent performances (bar Arsenal away) you can see why. In fact, he hasn’t been on the losing side in his last three Argentina games either, impressive.

Captain or not, Tevez has been a huge player for City. In fact, it could be argued that making him captain was a mistake. His pitch-side tantrum last September was obviously a bad decision, but what came as a shock to the Argentine forward was the disciplinary action the club took against him. He thought he was bigger than the club, he thought he could get away with such behaviour, and do you know what? He has every right think he’s bigger than the club. If he can come back after what he did, have that much of a positive impact on the pitch and be welcomed back by the fans, then he is truly making a mockery of the club. But they’re loving it.

So is Mr Tevez really worth all this controversy? Yes. During the January 2012 transfer window, there was a lot of speculation on Tevez’ future at Manchester City due to his recent fallout with Mancini and the club’s hierarchy. He was linked with Italian giants (and rivals) Inter and AC Milan, as well as France’s new money-machine, Paris Saint-Germain.  Inter (who were, and still are, having a terrible season) needed him, AC wanted him, as did PSG. No matter where he went he would have been largely appreciated, because he is a prodigious talent.

It didn’t come as a shock when the January window closed and Tevez was still a Man City player. Mancini knew he needed him, the Italian is no fool.

On his return to Man City, the Argentine forward put in a performance of a decent standard. Just decent. But decent was enough. This is a man who has spent months on the sidelines and lost a lot of match fitness. For him to walk straight back into that squad and set up a goal on his return is quite remarkable. The timing was pretty good too, what with Balotelli finally pushing Mancini over the edge.

Carlos Tevez has shown that although he can come across as a “mercenary” footballer, he does what he’s paid to do: play football, and he does so brilliantly. No matter what team he’s at, he gives 110% on the pitch. Whether he played for the minnows of West Ham, the prominent Red Devils of Manchester, or his current £200,000+ a week employers Manchester City, he just plays football as everyone loves to see it played, with passion and undoubted skill.

He is one of the best players in the world; he’s just hard to live with.