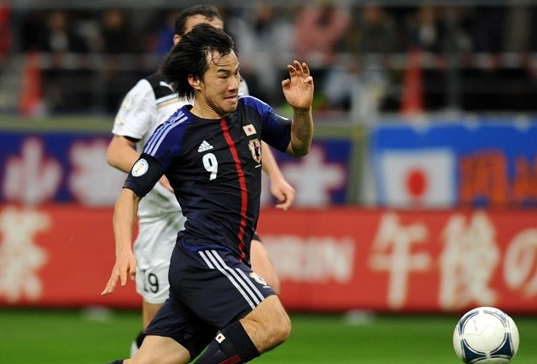 Record breaker Shinji Okazaki will be the man tasked with leading the line for Japan this summer in Brazil. The FSV 05 Mainz striker who joined from VfB Stuttgart in the summer of 2013, finished the season with an impressive tally of 15 goals meaning he became the highest scoring Japanese player in a Bundesliga season taking over Shinji Kagawa who scored 13 goals for Dortmund in the 2011-2012 season.

Okazaki scored his 14th and record-breaking goal in April as he helped his team to a 2-0 victory over Nuremburg. He is adored by the fans in Mainz and was voted the seasons most improved player in a poll taken on the club website. He was played out of position, left-wing, at VfB Stuttgart but has shown this season that his natural habitat is in the opposition box playing as an out-and-out striker.

Okazaki scored more goals this season than the total he scored for VfB Stuttgart in two-and-a-half years at that club. The striker’s tally this season included five braces. Twenty-one Japanese players have featured in the Bundesliga. Yasuhiko Okudera, who played in the 1970s and 80s, has the record for most goals in total, with 26. Okazaki now has 25 Bundesliga goals in total.

Following a 3-2 final day victory against Hamburg SV, which included a goal from Okazaki, Mainz qualified for a European competition, in the shape of the Europa League, for only the second time in their history with a seventh place finish in the Bundesliga.

Impressively, Okazaki was only five goals away from equalling top scorer and Bayern bound Robert Lewandowki’s tally for the season and just three short of current Bayern striker Mario Mandzukic who managed to notch 18 goals.

With the help of Okazaki’s goals, Mainz achieved something that many thought would not be possible which gives hope to fans of his national team that he can help to shock people again this summer in Brazil.

It’s not just goals that Okazaki can offer; his work-rate that has also caught the eye of many admirers. He is always willing to chase after balls that he shouldn’t really be getting but it may be a bit easier for him this summer as Japan like to get the ball down and deliver countless numbers of slick passes to feet.

Anything is possible if Okazaki performs to the best of his ability and matches his performances in the very tough Bundesliga this season. He will once again be involved against some very tricky opponents this summer and will be hoping that he can help team-mates such as namesake, Shinji Kagawa, to also perform to the standards we have seen in recent years.

Goals were few and far between at the Confederations Cup last summer and Okazaki will be seeking to resolve that issue and also improve on his record of 38 goals in 74 appearances for the Blue Samurais.