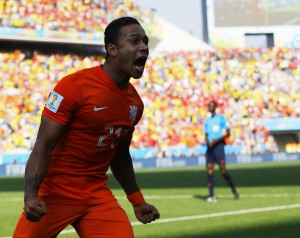 Before the beginning of this year’s World Cup, not a single person gave Holland a chance. It seemed as though Louis van Gaal was dealt with a pocket of seven and two rather than a pair of aces. Analysis pre-tournament suggested that the Netherlands squad was young, immature and nowhere near  suitable for the task of even qualifying from a group which consisted of Spain, Chile and Australia.

The first game in Group B pitted reigning world champions, Spain against a prematurely ridiculed Holland side. After 27 minutes a Xabi Alonso penalty put Spain 1-0 ahead, and it seemed to be game over. On the contrary, this ‘incapable’ Dutch team, against all odds, came out fighting and turned the game on its head. The game finished Spain 1-5 Holland. Was this a fluke? Absolutely not. Van Gaal’s team was hungrier, technically better and more clinical than anyone could have expected. They carried this form into the remaining two games in the group and finished top with a record of played three, won three.

Considered an incredibly average side pre-tournament, this group of players truly showed their value, reaching the semi-finals only to be knocked out by eventual runners-up, Argentina. The majority of the squad Van Gaal had picked was unheard of in European circles (by those who don’t watch Eredivisie on a regular basis.) One thing is for certain, they won’t be overlooked in tournaments to come.

Kevin Strootman and Rafael Van Der Vaart are two players who got injured on the brink of the World Cup in Brazil, both of whom would’ve arguably started in that opening match in Salvador. Strootman, who has been exceptional since joining Roma, would most certainly have been a key man in what would have been a 4-3-3 formation for Holland throughout the tournament. When his injury occurred and his withdrawal from the squad came to fruition, Van Gaal’s hand was forced. And so, the introduction of the 3-5-2. A blessing in disguise, as far as the new crop of players were concerned.

No one doubted that the Dutch had quality in the final third, with Robin Van Persie and Arjen Robben leading from the front, but the emergence of a number of young, quick and powerful ‘unknowns’ shook the tournament. Ten members of the 23-man squad in which Van Gaal took to Brazil came from their domestic league – Ajax (three), Feyenoord (five) and PSV (two).

Daley Blind (Ajax) had an excellent tournament. Playing as a left wing-back he was defensively solid as well as a very attacking threat throughout. There was a lot of scepticism regarding Blind leading up to Brazil and he managed to swat away all doubters. He was unplayable against Spain in the opening game and nailed home the effect wing-backs can have in the modern game. An array of passing, tackling and sublime technical ability summed up his tournament. His price value has since rose quite a bit and Ajax will do well to hold onto the all-rounder before the transfer window shuts earl next week. He has been linked with Manchester United all summer and it remains to be seen whether Van Gaal can land his £17 million rated man.

Daryl Janmaat, Bruno Martins Indi and Stefan De Vrij are all players who have risen through the ranks at Feyenoord in the last number of years. It’s fair to say that all three have decent enough ability but are also fairly limited in the same light. Are any of them the next Ronald Koeman? Probably not, but as unit they worked extremely well in Holland’s World Cup campaign. Janmaat has already sealed a move to the Premier League with Newcastle United while Indi (FC Porto) and De Vrij (Lazio) have also moved elsewhere during the close season.

Indi made the switch to Portugal with FC Porto and will be hoping to be a suitable replacement for Eliaquim Mangala after his move to Manchester City. De Vrij was being touted as new signing for Manchester United, but has decided a move to Rome with Lazio will further his career. Although the trio has been somewhat broken up having departed Feyenoord, if they can all stay on the same wave length when on national team duty,  they will become a very hard team to break down in future tournaments.

For me, one of the rising stars in European football at the moment is PSV’s Memphis Depay. It will be deemed an absolute miracle if PSV can hold onto his services for another season. Depay has started the season in blinding fashion, having racked up five goals in three league games thus far for the ‘Red and Whites’. His pace, trickery and ability to score a goal make him indispensable to a PSV team who will have their sights firmly on the Eredivisie title this season. His team-mate and fellow countryman Georginio Wijnaldum has started the season in similar fashion to the 20-year-old and he can be a commanding midfielder for Holland in years to come.

It takes a brave man to compare this current generation of Dutch players with some of the legends who have worn the ‘Oranje’ over the years and I won’t be foolish enough to do so. However, with the right guidance from new head coach, Guus Hiddink  and time on their side, we could once again mention the Dutch in the same breath as those who have gone before.

Freelance journalist living in Dublin. Contributor to newstalk.ie as well as other websites. Original member of 'The Final Third'. Big League of Ireland fan, Shelbourne home and away. As well as supporting Manchester City I have a keen interest in Roma and all things Italian. Feel free to contact me via Twitter or by email.