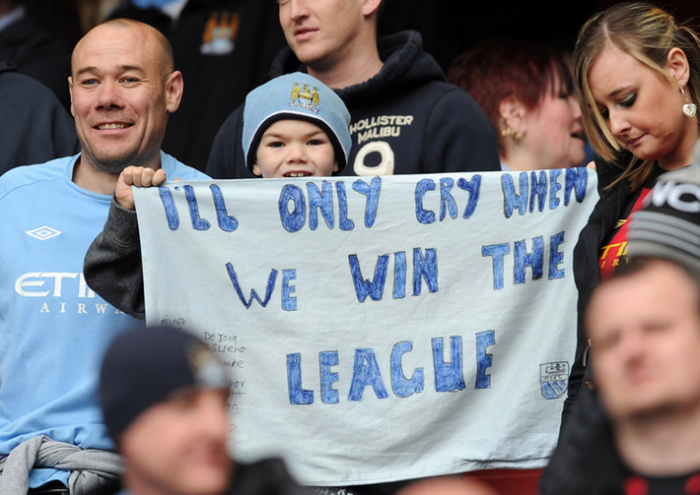 “We won it in Fergie Time,” was the joyous chant of Manchester City fans inside The Etihad Stadium. The incredible events that preceded such elation felt very much like the equivalent of their local neighbour’s last gasp Champions League victory in the Nou Camp. For Solskjaer and Sheringham read Dzeko and Aguero.

Yet, much more remarkable than those dramatic final minutes was the fact that City have been crowned champions during ‘Fergie’s Time’. Just 13 years ago while Ferguson was celebrating his first ever Champions League success against European giants Bayern Munich, City were competing in a League One play-off beating Gillingham on penalties.

The blue half of Manchester has spent over two years in the shadow of their red neighbours as they have witnessed them become a global sporting juggernaut, steered so masterfully by Sir Alex Ferguson. He has symbolised difference between the two rivals, dictating United’s success which City fans have swallowed for two decades. Proclamations back in 1999 that City would even threaten, let alone defeat the this Tyrant of football success responsible for inflicting so much of their pain, just over a decade later would have seen you laughed out of Manchester. Or carried out in a straight-jacket.

But, Sheik Mansour’s 2008 takeover and subsequent billion pound investment has given City an equal footing in the city they believe to be theirs.  If the FA Cup success broke the seal, then the Premiership title has left many wetting themselves with talk of a new era of unchecked domination. This is after all the age of media hyperbole, which lends itself to often hysteric proclamations, which have understandably been exacerbated by the incredible scenes on Sunday. Yet, there is one man you can be sure is remaining calm amongst talk of impending and prolonged power shifts, and that is of course Alex Ferguson.

It has been a landmark season for City and they thoroughly deserved to crowned Premier League Champions. However, the Red Devils have performed admirably to take them all the way to the final seconds of the season. The issue here is not money. Many will say City bought the title and to an extent they did, but to an extent everyone does, and it is a fact that’s largely irrelevant. Indeed, Manchester United’s starting XI on Sunday cost £8 million more than their neighbour’s line up.

City have been forced to spend excessively in order to accelerate their competitiveness, the modern climate of football demands it as revenue based growth has  been made impossible by the financial exclusivity that Champions League qualification and its millions has created. What is pertinent though is that City have arrived and seemingly bottomless oil barrels of cash makes them the team to beat. Yet, more than any other United team in recent history, this is one of considerable transition and yet they have still competed blow for blow.  It suggests that bold predictions are premature and that City’s mission of domestic and indeed European domination will be far from straightforward.

The likes of Danny Welbeck, Phil Jones, Chris Smalling and Ashley Young have played their first full seasons’ at the sharp end of the Premier League. Plans to promote Tom Cleverely into senior action have been scuppered by injury and United have operated with a make-shift midfield for large parts of the season. The absence of Nemanja Vidic has been a huge blow and was ultimately telling in games against Wigan and Everton where his imperious stature and calming influence were sorely missed. As was the lack of an experienced goalkeeper since, undoubted talent though he is, David De Gea initially struggled to adapt to the rigours of Premiership life both physically and mentally. Simply put City’s squad regardless of how much it cost is superior to United’s. Therefore, United supporters can take solace from the fact that despite a season of significant change they still came within touching distance of a 20th league triumph.

United’s achievements can be put in perspective by contrasting it to events at Chelsea. Similarly to United they are negotiating a period of transition, yet despite cup success Chelsea sit 25 points adrift of the Premier League summit. Two years ago they appeared to be the team beat after a League and Cup Double. Trace time further back and their 2005 League triumph was too pinpointed as a watershed moment for the English game, the beginning of sustained period of dominance. Conversely, seven years on and United have won a further four Premier League titles, Chelsea just two. Ferguson’s managerial ability has undoubtedly been paramount in curtailing the ascendancies of not just Chelsea, but Arseanal, Blackburn and even Leeds before them. He and his teams have been a blockade to rival dominance, a barrier to the sustained superiority of other clubs.

It is evidence that money places you in a position to compete but offers no guarantee that an epoch of supremacy will be secured. Especially not while United remain under the stewardship of perhaps the greatest manager to have ever lived. The wisdom he possesses and stability he represents are still his employer’s greatest strength in the face of growing competition. Furthermore, City must fall in line with Uefa’s financial fair play regulations, a sizeable task considering City’s’ 2011 losses totalled a astounding £194.9 million and whose wage bill currently stands at £174 million.

It has been a staggering weekend of football and Mancini’s men have undoubtedly taken residence at the Premier League’s summit, but like a house buyer, until they pay the mortgage it will not exclusively be theirs. The fight from their city rivals will not cease, history alone has taught us that. And while money will certainly not be a hurdle to unimpeded ascendancy, a cunning old Glaswegian may still yet be.

One thought on “Can City really dominate in Fergie’s time?”