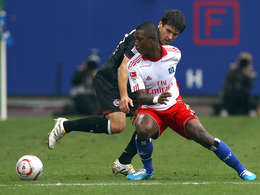 It was another spectacular week in Bundesliga where Mainz and Borussia Dortmund had the last laugh together as both teams sit at the top of the table with some freak unbeaten run. Stuttgart were left in despair again as they still looking off-the-road while HSV was the side that looked much relieved when they finally pulled it off to win a game after four win-less results. Elsewhere, Schalke 04 haven’t got it together yet and Werder Bremen got a crucial point away at BayArena. Let’s look at how it went in Germany this weekend.

Week 7 of Bundesliga started last Friday with much fan-fare as newly promoted Hamburg’s side St. Pauli made a visit to Hannover 96. As the match started, St. Pauli just told all parties involved that they are no pretenders when it comes to stealing points away from home. Six minutes in to the game and they were ahead already when Marius Ebbers powerfully headed in to the net to make it 0-1. The match wore on and both teams had a share of many chances but none of them could avail them. With ten minutes left in to the game, Haggui was sent off and the hosts were down to ten men.

St. Pauli just had to hold on and sit back to assure another victory on the road and they did it with ease eventually.

Hamburger SV were looking for some answers as they were without a win for last four matches. They came close to end this disruptive run last week when they visited Werder Bremen last week but Thomas Schaaf’s side looked good value of themselves even without Frings, Fritz, and Pizarro and deservedly won the match 3-2 at the end. This time Hamburger entertained Kaiserslautern at home and things started looking bleak with only three minutes into the game when the visitors pulled it off with a free-kick to make it 0-1. Lakic scored with a well-taken free-kick.

What was interesting yet intriguing about this match was Kaiserslautern were also on a four-game winless streak. So the match was a treat but the question was which side would have it at the end. It was HSV that started pulling strings after half-time and pressurized the dogged defense of Kaiserslautern side. HSV finally leveled the score-line with 1-1 when second half substitute Gojko Kacar scored for the home side. HSV, gaining confidence after that, looked for more attacks and finally were rewarded when enthusiast winger Pitroipa slotted in a well decorated cross for Choupo-Moting who made no mistake and put the side forward with 2-1 in 85th minute of the game. HSV finally won the game and relief was there to be seen amongst players and the fans as well. 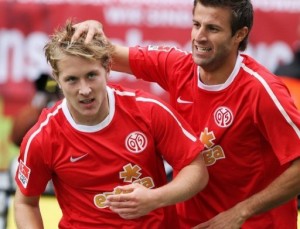 Many eyes were on this match and many bets were on line as Mainz hosted Hoffenheim in a match which had a potential to be a record setter. The record in line was if Mainz won the match then they would level the Bundesliga record of seven-match unbeaten run off the start of the campaign.

The match started with some grand atmosphere as home fans cheered their guts out to provide the support that Mainz needed to go in history books. But the talent and technique that Thomas Tuchel’s side possess was enough to enlist them in to Bundesliga record-book as they pulled out an absolute cracker out of the match which went in their favor with an amazing result, 4-2.

Lewis Holtby, the man behind the Mainz orchestra, proved lethal for Hoffenheim as he was trying the killer passes for fun throughout the match. He sent a loose ball to on-running Adam Szalai who looked to score an easy goal but took an unselfish approach and laid the ball to his team-mate, Alagui who finished off the decent move. Spectators already looked set for shape of things to come. Gustavo took the affir in his own hands and released a through ball for Ba who made no mistake and leveld the terms for Hoffenheim, 1-1.

Lewis Holtby kept sabotaging the Hoffenheim defense with his vision and breath-taking passes that were coming like knife through the cake for his team-mates. He released a ball for on-rushing Szalai again at the start of second half and this time Szalai went on to hit the back of the net himself and made it 2-1.

What proved fatal for Hoffenheim was; they let Holtby do what he does best with no marking and no pressing. He was roaming freely and doing his business with no second thoughts on his mind. As the result; Mainz went ahead again with 3-1 score-line as Holtby tried to give a pass from the by-line which went in goal as it got deflected of Gustavo’s legs.

Sigurdsson came up with a thunderous strike that hit the back of the net to make it 3-2 for Hoffenheim and entertainment just couldn’t fade away off the match.

Simunic was left red-faced as he brought down Holtby in the penalty area and took the red card on his shoulders. Schurrle took the spot-kick and Mainz were 4-2 in the match with Hoffenheim left with no answers from then on.

FC Cologne haven’t been enjoying the start of the season but they have quality squad and would set it right once season goes ahead but for now they are stuck in somewhere. New comers this seas Freiburg hosted them on Saturday and Jan Rosenthal set the alarm as he scored two goals within 10 minutes for Freiburg. Desperate measures were to be taken by Cologne and with a wake-up call they made it 2-2. But it was Freiburg again who left smiles on the faces of home fans as they cruised to the victory in the five-goal thriller which they won 3-2 in the end.

In another Saturday match, Mochengladbach hosted Steve McLaren’s Wolfsburg who looks confidence as the weeks wear on. McLaren was left with some bitter taste as the start of season saw his team losing three matches in a row. After knowing the pace and tactics of Bundesliga and with adaptability he started paving his ways in right direction and steered his team for three consecutive wins. This time again, they looked certain to pull out another win as Kahlenberg put the team forward with his first half effort but Mochengladbach now consists of some talented squad that includes the players like Bradley and Arango.

In second half they kept pressuring the defense of Wolfsburg and deservedly leveled the terms at 65th minutes of the game when Arango set the ball for Marx who made no mistake. After the draw, Steve McLaren would be disappointed to some extent but credit should be given to him as he has set the team in right direction again. 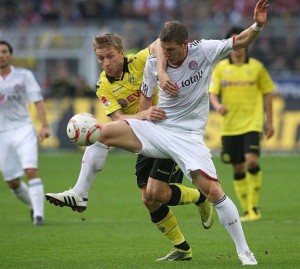 The last match of Saturday was played between Nurnberg and Schalke 04. Schalke have been bit shaky at back since the start of the season and their defensive woes continued this week again as they succumbed to a 2-1 defeat to Nurnberg. Schalke have a top keeper in Manuel Neuer  but it’s their back-four which have let them down again and again. Their attack boasts the names likes of Raul, Farfan, Huntelaar, and Rakitic but with the departure of their centre-backs in summer transfer window and with no recruitments in that department has come to haunt them now. Specially the departure of Rafinha has hit them hard. Manuel Neuer can’t do it for you week in week out and Felix Magath has to address this issue or their season would be a disaster.

Stuttgart was the only second team, besides Hannover, which lost the home match this weekend. Frankfurt looked good value of themselves as they started the match on full song. Gekas, the man who has never forgotten to wear his goal-scoring boots in Bundesliga, opened the scoring for Frankfurt which was doubled by Chris in second half. Stuttgart kept attacking but it was to no avail. Delpierre was sent off in 84th minute and the match looked buried for Stuttgart already. They made a final push however and got a consolation goal courtesy of Pogrebnyak. Stuttgart are sitting at the bottom of the table and things are looking in similar situation like last season when they were doing well in Champions League but were fighting in relegation although this time there is a little difference that they are in Europa League.

Leverkusen and Werder played an absolute four-goal thriller at BayArena on Sunday evening. Werder Bremen played without Fritz, Frings, and Pizarro as they were out due to being injured last week but still looked composed as Wesley, Marin, and Almeida kept the Leverkusen defense on nerves. It was Leverkusen who scored the scoring with Helmes coming out with a goal in 16th minute of the game. Werder looked to have lost this match again but after second half they were the better side and hit the back of the net twice to make it 1-2 as Almeida and Marin scored the goals. With the tense growing on as the match wore on, both teams tested the opposite keepers with marauding attacks. Derdiyok scored an equalizer in 78th minute. Thomas Schaaf would have been disappointed as his team was ahead without his important team players but getting a point from BayArena with an injured side is highly commendable.

This match was the treat of football purists as Dortmund looked to strengthen their position in league with a win and keep trailing FSV Mainz while Bayern Munich were expecting for some rejuvenation by beating Dortmund. As the match started, Bayern Munich looked their “usual-self” as they dictated the tempo of the game with the possession. Schweinsteiger, van Bommel, Kroos, and Muller looked everyone in the midfield. Louis van Gaal started with Mario Gomez as a sole striker who was attacking on Dortmund goal every now and then but with no success. Grosskreutz and Lucas Barrios looked to break the Bayern defense on several occasions but to no avail.

It was already late for Bayern Munich to make any changes for the match as Subotic and Hummels looked very steady at the back. Dortmund finished the match and look to go on a long run from this point.