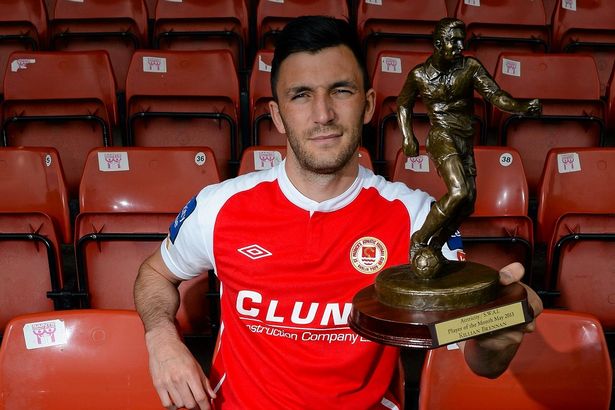 St. Patrick’s Athletic midfielder Killian Brennan has been named the PFAI Player of the Year 2013.

Brennan’s team-mate Greg Bolger had also been shortlisted alongside the Dundalk duo of Pat Hoban and Richie Towell.

Twenty-nine year-old Brennan proved pivotal to Pat’s winning the League of Ireland title for the eighth time (and the first time since 1999) in what was his first season with the Inchicore outfit.

Towell enjoyed some compensation for not winning the main prize as the Dundalk starlet won the Young Player of the Year award.

Towell held off stiff competition from his team-mate Hoban as well as Cork City’s Daryl Horgan who had a stellar season for the leesiders.

Twenty-two year-old Towell was a dominant force in midfield for the Oriel Park outfit in what was an amazing season for Stephen Kenny’s men as they managed to finish second in the top flight despite meagre resources.

Towell was the SWAI Player of the Month for August, providing two goals and three assists in that month alone and proving a pivotal influence in the Louth outfit qualifying for Europe.

Little more than a year after being sacked as manager of Shamrock Rovers, Kenny was named the PFAI Manager of the Year. The Dubliner assembled an exciting squad of young players at Dundalk and really worked the oracle in overseeing them to a second place finish after the Lilywhites narrowly avoided relegation in 2012. The club also reached the semi-final of the FAI Cup only to be beaten by neighbours Drogheda United.

Athlone Town’s Phillip Gorman was given the First Division Player of the Year award at the Hilton.

The Overseas Player of the Year award went to Everton’s Séamus Coleman who has been an ever present in the Everton starting line-up this year as well as one of the star players in a trying time for the Republic of Ireland internationally.

Cork based refereed Alan Kelly won the Referee of the Year award. The 38 year-old will take up a new position as a referee in Major League Soccer in the United States early in the new year.

The PFAI Merit Award went to Brendan Bradley who enjoyed a 20 year stint as a player in the League of Ireland as well enjoying some success in the (English) Football League.