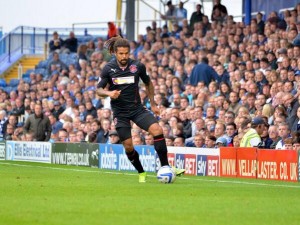 On 5 November 2013 I received notification via a text message that Bury had signed Fleetwood Town left back Dean Howell on a two months loan. The name rang a bell immediately. I was sure he had played for Bury previously and set about checking this out.

I Googled “Dean Howell” and was surprised by what I found. Yes, he had played for Bury before, making three appearances during a loan spell in season 2008-09, but there was something else that set Dean Howell apart from other footballers. I learned that Dean Howell is a vegan.

As someone who has been a vegetarian (nowadays a part-time one) for nearly a quarter of a century, and who still tries to keep fit, this interested me a great deal.

Football has changed considerably over the years and is played at a much faster pace than ever. Players have had to become fitter and stronger, and in order to maintain this, more emphasis must surely be placed on a healthy diet. I had not imagined however that there would be many, if any, vegetarian footballers, let alone vegan footballers.

There were a couple of articles about Dean which I read, the first one being a very interesting piece on Vegan Bodybuilding website (www.veganbodybuilding.org/dean.htm).

I wanted to find out a bit more though and thought that it would be an interesting topic to write about, but I wanted to do so without dipping into what I had read. I decided to contact Dean via Revolution Foods, a business he runs with friends (www.revolution-foods.com). Dean was kind enough to forward his phone number and agree to have a chat to me.

I was a little apprehensive at first as I am by no means a journalist and have never previously approached anyone like this in order to write an article. We exchanged a couple of texts and agreed on an evening when we could speak.

I need not have been apprehensive at all. Affable and erudite, Dean spoke to me enthusiastically for over an hour about the how important his diet is to him.

I had jotted down a number of questions but at the outset I explained to Dean the circumstances around me finding out about him being vegan. We spoke firstly about Dean’s recent loan spell with Bury.

Of new Bury manager, David Flitcroft, Dean said, “What a manager! He’s a nice, honest guy and you are in good hands. You’ve got a Championship manager there, if not Premiership.”

Dean only worked under Flitcroft for a couple of weeks before returning to his parent club, Fleetwood, but said that he was “buzzing” during that time.

“He’s a good man manager and brings a calmness to the place. He’s passionate and has changed the mentality there,” said Dean.

Dean added that Flitcroft had engendered such a spirit at the club whereby even the players on the substitutes’ bench want to see the team winning. This will not not always be the case, as players who are not picked for the starting eleven have a vested interest in things not going well for the team or team mates selected ahead of them.

Dean’s professional footballing career kicked off at Notts County and he lived in digs with about 15 other young players. The couple looking after them understandably provided cheap, simple foods such as chicken, pasta and beans and their was a set meal plan. The players were youthful and trained every day and so diet was not really such an issue at that time.

It was following the passing of his grandmother to cancer however that Dean embarked on an ongoing journey of education about nutrition. As his grandmother neither smoked nor drank, Dean was convinced that the cause of the cancer must have been dietary.

Dean took to the internet and YouTube, he attended seminars and built up a network of health conscious people with whom he shared information. Initially Dean became a vegetarian but then he cut out all dairy products and found it was of “massive benefit” to him.

When I was a boy and first started watching football I used to hear it said that young players would be encouraged to eat steaks and drink stout in order to build themselves up.

Football and ideas of how one should prepare before a game have altered over the years but I wondered whether Dean had encountered any “old school” managers or coaches who disapproved of his diet.

“No, they don’t question what I do but I would say that some distanced themselves from me, they misunderstood, it took them out of their comfort zone.” 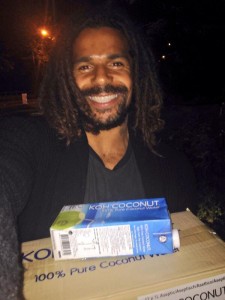 Dean believed that this has hampered him a little in his career and might possibly do so in the future but he does not want to feel that he has to fit into another environment.

Another popular belief is that footballers can be found falling out of trendy bars and nightclubs and indulging in all manner of drunken behaviour. Dean however stopped drinking alcohol a few years and I asked him if this caused any difficulty in bonding with team mates planning a big night out.

“I’m not the first lad to be called up” he said.

Dean’s diet does give rise to dressing room banter among his team mates though and he said he is often asked, “How can you do without meat?”

33-year-old Dean is not one for keeping late hours anyway and understands the importance of rest as a professional athlete. He told me that he always tries to get an early night on a Thursday, the day but one before a game. Dean explained that you might not necessarily get a good night’s sleep on the Friday, particularly if the team was playing away from home and staying in a hotel.

“You’re away from home and you might be rooming with someone who’s up late on his lap top, or talking to his girlfriend,”

A good night’s sleep on a Thursday therefore ensures Dean is sufficiently rested for match day.

“Players will come in on a match day and load up on Red Bull. You train all week so perhaps they’re not comfortable with how they’ve prepared.”

Dean believes that, in the longer term, such energy drinks are damaging. “The adrenal glands will be smashed to pieces and you’ll end up with chronic fatigue.”

Dean said that he also struggled to understand how a professional footballer could have issues such as putting on weight during the course of a season bearing in mind the amount and intensity of training that players do.

I was interested to know whether Dean knew of any other vegan or vegetarian footballers. I had done a little research myself beforehand and discovered to my surprise that Sir Stanley Matthews was a “near-vegetarian” (and a teetotaller) and he played football until he was 50! I also found an article about Jason Roberts who described himself as a “tactical vegan”.

Roberts explained that throughout the football season he follows a vegan diet and feels much better for it. Out of season however he eats exactly what he wants and it sounds like he more than makes up for the meat which he deprives himself for the rest of the year.

Dean was not aware of any other current players who were vegan but did advise me of another player at Bury, Euan Holden, who was “going down the vegetarian route”. Holden has been very much a peripheral figure in Bury’s first team and has in the last few days been released by the club.

Dean advised that anyone who is considering becoming a vegetarian should do some research first as it can sometimes take the body sometime to re-adapt if it has been used to a diet high in meat and dairy products.

I asked him whether he felt that some of the foods, which are championed as promoting good health, are not quite what they seem.

“There’s a food war going on! We should question what we are eating.”

What of Quorn then which is promoted as a good source of protein?

“It’s genetically modified. Then there’s seedless grapes, they are a hybrid, man-made, but it’s all about supply and demand.”

I had read of Dean’s typical diet in the article on the Vegan Bodybuilder website but he told me that he is constantly varying it.

“In winter it might be steamed vegetables and warm soups. There are ways of making this stuff taste nice. It’s trial and error.” For example, Dean told me that he blends Moringa tea with dates, or sometimes with coconut water.

Dean places a great importance and emphasis on alkaline foods in his diet, particularly bearing in mind his profession, adding, “An athlete’s body is put under stress which makes it acidic”.

Moving onto Dean’s football career, I asked what his best and worst moments were. Without hesitation he said that his most memorable moment was playing at Old Trafford in an FA Cup fifth round tie for Crawley Town against Manchester United.

In fact, Dean said that his best seasons have come as he has got older and his best football was probably at Crawley where he was part of team which won back to back promotions and enjoyed two good FA Cup runs, reaching the fifth round on each occasion.

So did Dean see himself playing football for a number of years to come? He felt that physically he would be able to but he also realised that there was a lot of life after football.

“I love the game and I respect the game but I understand it too. It’s a game based on opinions and you can soon find yourself out of favour,” he said.

Dean also said that coaching does not appeal to him but that he might be interesting in staying in the game in a role in a capacity involving nutrition or the psychology of the game.

He was amazed that in 2014 players are still having pre match meals such as potatoes, scrambled eggs and Lucozade when there is “so much science out there.”

We talked about how vital it is for players to plan ahead for the future and how there have been a number of well documented instances of ex-footballers suffering from depression or falling on hard times.

“While you are in it you are treated very well for ten months of the year and you are certain of a routine, but once this is taken away from you the world opens up. They’ll still chase the fix of alcohol, gambling, womanising and this can lead to a state of depression.”

Injuries can also impact on former footballers years after their playing days are over. Dean told me that players can be pressured into having operations that they perhaps should not have. He had himself undergone three operations on groin injuries, two of which had been misdiagnosed. He fully understands though why clubs want you back and ready to play after injury as soon as possible

“They are paying your wages, but the holistic way is always the best.”

Finally, as Dean has recently been playing for Bury, I asked him if he could sum up in one word what he thought about black puddings, something for which Bury is famed for.

At the end of our conversation Dean thanked me for taking an interest in him. Dean Howell is very much a footballer breaking the mould and I would like to take this opportunity to thank him for his time, and wish him well for the remainder of his career in football and beyond.

Bury FC supporter who tries to keep fit and still play a bit, usually in goal, hence The Cat!