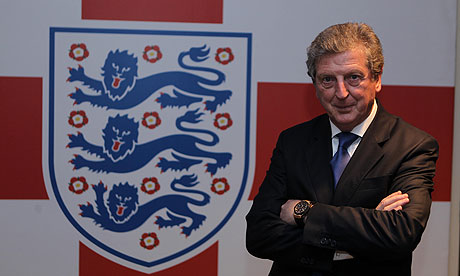 Should England qualify for the World Cup in Brazil, there are reasons to be optimistic. For the first major International tournament in almost 20 years, England won’t line up with a predictable and easy to read 4-4-2 formation. For too long the traditional English formation has been our downfall.

There are few countries worse than England at retaining possession, so to line up with only two central midfielders made it easier for our opponents to keep the ball. This was especially clear against the likes of Schweinsteiger, Khedira and Ozil, the German trio that punished England so harshly in 2010. During England’s 2014 qualifying campaign, Roy Hodgson has opted against the 4-4-2 that saw England fall short against Andrea Pirlo’s Italy at Euro 2012. He has adopted a more compact 4-3-3/4-1-4-1 formation which makes England harder to beat and allows a deep lying midfield player to protect the defence and dictate the play when England are in possession.

Gerrard, Lampard, Rooney and Cole will almost certainly make the squad for Brazil, but the most problematic pair of England’s ‘Old Guard’ have retired. England lined up with the central defensive partnership of Rio Ferdinand and John Terry for the best part of a decade. Both players have retired from the International set up, following a series of controversies, including the much documented race row in which Terry was found guilty of racially abusing Ferdinand’s brother, Anton. Gary Cahill and Phil Jagielka have now established themselves as first choice centre-halves. Many doubt whether the pair boast the natural ability of their troubled predecessors, but a seemingly harmonious partnership has formed, which can only be good for morale within the squad.

Hodgson’s favoured line up in qualifying is likely to be his favoured line-up in Rio. Injuries and suspensions will inevitably play a part, but the team below is what I expect from England if they make it to Brazil. (This is the team I expect Hodgson to pick, not necessarily the one I believe to be the strongest).

Joe Hart will be first choice goalkeeper for the first time at a World Cup. He was given the number 23 by Fabio Capello in 2010, as David James and Rob Green played in goal for England. Despite making several uncharacteristic mistakes recently, Hart has little competition for his place. England have suffered from goalkeeping errors in the past, (Green against USA in 2010, Carson against Croatia in 2007) but provided he has a good season for Manchester City, there will be very few goalkeepers at World Cup 2014 that are better than Joe Hart.

Glen Johnson is set to retain his place as England’s first choice right back. Having worked with Hodgson at Liverpool, Johnson knows what is expected of him and has the ability to score goals from full-back. At 23-years-old, Kyle Walker has time on his side and will provide stiff competition for Johnson, especially if Tottenham beat Liverpool to a Champions League place. Phil Jones may also challenge after becoming Manchester United right back under David Moyes.

When Jose Mourinho returned to Chelsea, it was difficult to predict which players he would favour. David Luiz had just had his best ever season in a Chelsea shirt, John Terry was set to be restored as captain and Branislav Ivanovic switched to centre-back to accommodate attacking right back Cesar Azpilicueta. However, Mourinho decided Gary Cahill was one of his best two central defenders and the former Bolton skipper has started alongside John Terry in every Premier League game this season. Cahill can now regard himself as England’s first choice centre-back. His speed across the ground is important when playing alongside Phil Jagielka. An injury to Cahill would seriously weaken England.

Phil Jagielka’s bravery has been noticeable throughout qualifying. It has been said that England players don’t appear to care when playing for their country, but that cannot be said about the Everton defender. He is fearless, in the mould of John Terry and would put his body on the line to prevent the opposition from scoring. His lack of pace is a worry against top International strikers, he will be 31 in Brazil but so far deserves his place in the starting line up.

Everton’s Leighton Baines is in an unfortunately similar situation to Cristiano Ronaldo. No matter how well he performs, there always seems to be that one player who is just ever so slightly better. Ashley Cole already holds the record for the most tournament caps as an England player, and will further that record in Brazil, should England get there. Cole is widely considered as the only member of the so called ‘golden generation’ to have performed consistently in an England shirt.

Michael Carrick currently occupies what is arguably England’s most important position. His role is to protect the defence by breaking up opposition attacks and keep England in possession with passes into both full-backs who will push forward and try to create chances. Carrick also has the ability to find the striker with forward passes along the ground, something England have lacked in the past. However, Carrick has a less than impressive International record, having retired during a period he was rarely considered for selection. The United midfielder also missed England’s recent friendly with an eye infection. His ability has never been in doubt, but he must remain available or risk losing his place to Steven Gerrard, who performed this role excellently in the recent qualifier against Moldova.

Steven Gerrard will captain England at the World Cup in what could be his last major International tournament. At 33-years-old, the midfielder has adapted in recent years and prefers a more withdrawn role for both club and country. His age no longer allows for the energetic, box to box performances of old, but that suits England and will work to Roy Hodgson’s advantage when it comes to improving ball retention. He has developed a promising understanding with midfield partner Jack Wilshere and will always provide goal scoring opportunities with the quality of his delivery from set-pieces.

Jack Wilshere would have 25 caps for England by now if he could just stay fit. As it stands, he has 9, but will inevitably build on that should he finally have an injury free season for Arsenal. England fans will be crossing their fingers every time the diminutive midfielder flies into a tackle, which he has a tendency to do. England have not yet enjoyed the luxury of Jack Wilshere at an International tournament, and he could potentially be the difference between a quarter-final and a semi-final. Should Wilshere not make the tournament through injury, expect Manchester United’s Tom Cleverley to take his place, which would significantly limit England’s attacking threat.

Theo Walcott has never quite fulfilled his potential. He famously experienced his first World Cup at the age of 17 without playing a minute of football at the tournament. He continues to threaten down England’s right hand side, and there is no doubt that his pace troubles opposition full-backs. His crossing needs to be improved, as does his goal-scoring record. Five goals in 35 appearances isn’t good enough for a player who considers himself a striker, especially considering three of those goals were scored in the same match against Croatia. Spurs winger Andros Townsend might be a surprise contender for a position on England’s right wing, should he displace Aaron Lennon at Tottenham over the coming season.

Danny Welbeck has been in superb form for England recently. Few central strikers could adapt so well to playing in a wide position, but Welbeck has made the transition with apparent ease, contributing three goals in his last two matches from the left of midfield. David Moyes has challenged him to score more goals for Manchester United this season, and his all round hold up play has seen him start the season as first choice, ahead of Wayne Rooney and Javier Hernandez. Hodgson’s management style is cautious, so expect Welbeck to start on the left hand side over the electric Daniel Sturridge, who has scored three winners in three games for Liverpool. Sturridge offers much less protection from a defensive point of view, so expect him to be used as an impact substitute or start against the weaker teams at the tournament.

Wayne Rooney is still England’s most talented player. After another summer of discontent, the significance of his role at Manchester United remains to be seen. Should he come into the first team picture and play alongside Robin Van Persie, he is certain to start for England under Hodgson. Rooney’s performances at major tournaments have been devastatingly below par, since he first broke his metatarsal at Euro 2004. Rooney often plays well during qualifying campaigns, but owes England fans a series of good performances should they reach Rio in 2014. Expect one of Andy Carroll or Rickie Lambert to challenge Rooney for the role of lone striker.