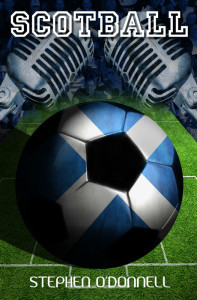 In 2014 Scotland proved that it enjoys a good debate, and Stephen O’Donnell’s second novel, Scotball, taps into that thirst for discussion, for challenging shibboleths and questioning orthodoxies, all the while exploring many of the most pertinent contemporary issues in Scottish sport, society and politics.

Although having read O’Donnell’s first novel, Paradise Road (read the review here), is not a prerequisite for enjoying Scotball, those who have will pick up a few references and recognise the engaging first-person narrative with its dry humour and blend of vernacular and standard English that succeeds in giving a flavour of the West of Scotland without making the text inaccessible to those who might be unfamiliar with it.

Our narrator in this offering is Peter Fitzpatrick, a character we met in Paradise Road. Peter has returned to Scotland with his Czech wife, Lenka, and his years abroad give him fresh perspectives on life in his home country, from the beer to the football and more besides.

We join Peter as he searches for gainful employment and then embarks on an audacious bid to revolutionise Scottish football broadcasting. If the success Peter (who has a background in finance and teaching English) has with this is fanciful then the rest of the book is very much grounded in the real world and, away from football, doesn’t hide from such potentially controversial themes as sectarianism or Scottish independence.

The novel might not shirk any tackles – ‘there are no taboos’ as Peter says on his TV programme The Scottish Football Debate – but that’s not to say that it is bleak with regards to its view of Scottish football; indeed Peter is keen to inject some optimism into the national discourse on Scotland’s favoured sport.

As in O’Donnell’s first novel, the protagonist here is a Celtic fan, but this is a novel about Scottish football (hence the title), not a novel about Celtic. The discussions on Peter’s show cover youth development, women’s football, Rangers’ financial problems and more.

This book aims to examine many aspects of modern football, not least the role of the media, but it is also a story of identity and belonging as Peter is forced to consider who he is, what his principles are and where he wants to be.

In the final chapter we reencounter Kevin McGarry, the principal character in Paradise Road, and get to see how he is getting on, which is both a welcome inclusion for readers of the aforementioned title and also provides a fascinating opportunity to compare and contrast the moments in Kevin and Peter’s lives where their paths have crossed and how they have influenced each other, and how football has been such a huge part of all of it.

Scotball is available now from Ringwood Publishing, Amazon and elsewhere.