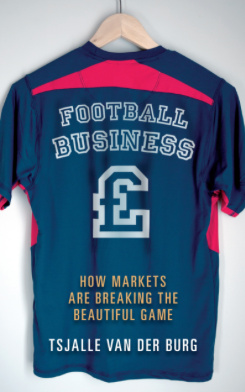 Despite the hatred and bile that millions of football fans across the globe harbour for Sepp Blatter, and the outrage that was espoused at his intention to run for a fourth term as president of FIFA, only one man was willing to oppose him in the election race. Jerome Champagne, who served as an executive at FIFA for eleven years, hopes to address the “current economic polarisation, and the sporting imbalances it brings in its wake”. Many hope that Champagne will be the man to start the call to arms that football fans needed to team up together and oppose the antiquated antics of the world governing body.

If not, then Tsjalle van der Burg’s book, Football Business: How Markets are Breaking the Beautiful Game, would be the perfect substitute.

Van der Burg – an economics professor at the University of Twente – has produced a book that is entering the ever growing community of literature that tries to wed the worlds of numbers and football into entertaining blue sky thinking and altered viewpoints. However, Football Business differs in that rather than producing a few facts and figures to fuel chat at the pub, it offers genuine solutions to some of the sport’s most grievous issues and sets out an agenda which would see clubs return to their roots and become community assets once again.

Very few readers are going to be as comfortable with numbers as van der Burg, but the author is able to explain his ideas in a simple and concise manner. For example, considering the range of football clubs a fan can choose to watch, and the availability of the sport on television, why do prices for match day tickets still continue to rocket? In any other market, a wide range of businesses and products leads to a reduction in the prices that need to be paid by consumers, except when it comes to the national sport.

For Tsjalle, it is an anathema that clubs which were set up by individuals in the 19th and 20th century to provide happiness, benefits and an outlet for communities all over Europe, have now been commandeered by individuals who are looking to take a single pay cheque out of them, and have very little if any thought for the people who keep the team alive. Football Business suggests that in order to repay the fans, all clubs throughout the continent will be required to pay a 10% levy against their earnings, and the money be funnelled into local social projects, and no government funding or concessions be granted to clubs in the future – instead the money would help alleviate taxes in sectors badly needing stimulus (of which football isn’t one).

Many may read just the last suggestion alone and think that it is a completely lost cause – how can the freest, most unrestrained market in the world suddenly demand faceless owners from every continent on Earth to cough up any proportion of their profits for anything other than new stars and players wages? Well, apparently there is a hero lurking just in the shadows: the European Union. Tsjalle van der Burg believes that the organisation has the power to impose on the clubs, in partnership with UEFA and Financial Fair Play, any levy or tax it likes that could benefit the sport and the footballing community.

In order to get UEFA, the EU or anyone else in footballing authority off their backside and do something beneficial has never been easy, but anyone who loves the sport should hope desperately that a copy of Football Business finds itself on someone’s desk, and soon it could be Tsjalle van der Burg that fans hold aloft as the saviour of football.

Football Business: How Markets are Breaking the Beautiful Game is out now and available via all good bookshops.