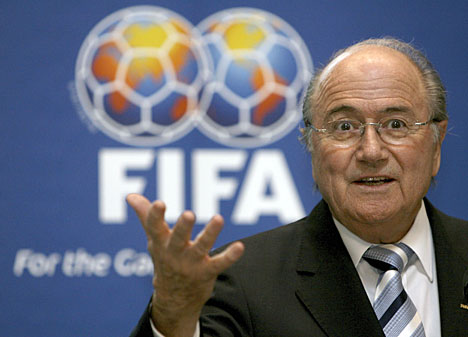 As Sepp Blatter uttered the words “Crisis… what is a Crisis?” there was a collective gasp from the press room, where hundreds of International journalists had gathered to witness one of the most eagerly anticipated press conferences of the year. As it turned out witnesses is all they were as Blatter acted out a theatrical play in which he refused to comment on certain subjects and went as far as to say he had “No reaction” to the fact that his long time ally Jack Warner had stated that Blatter “Must be stopped”.

Ironically it is this same man who has now pleaded with CONCACAF to support Blatter, as the farce continued. It would be some stretch of the imagination to suggest that FIFA have intentionally created this mess, with false-sackings, bribe-alleging emails and a blame-game merry-go-round to keep the heat off Blatter, but you would not bet against it. It has all played nicely into Blatter’s hands as he looks to shift power from the Executive Committee to the FIFA members.

As the accusations of corruption continued through the night it appeared that rather than weakening Blatter’s position, FAs around the world were giving support to their leader, a great man whose soldiers were letting him down. It appears that no one has any concrete evidence that Blatter himself has been guilty of receiving or giving any bribes. Whether he has or not is quite another matter, but for now we must assume he is clean. However the real issue lies in the fact that he is running a 24-man committee of which a third are under strong suspicion of corruption and it is suggested by some that Blatter was fully aware of this. You would have to be very naive to think that a man so involved with his committee and the members of FIFA would be blind to the sordid events occurring at its core. The fact that he has gone the route of denial says everything about a man who will stop at nothing to ensure another term as FIFA president. If he really wanted to offer transparency and to clean up FIFA and truly believed he was the right man for the job he would have postponed the election. After all it should not matter to him if he is re-elected now or in a month’s time. The reality of course is quite different as Blatter has done everything in his power to push the election through, stone-walling any kind of probing questioning and getting rid of anyone kicking up a fuss.

The press were given all of 30 minutes, which Blatter and his press officer deemed ample time to answer the many questions surrounding corruption, dictatorship and reform facing the world of football and its governing body. He left the conference to a barrage of questions from journalists left frustrated by his evasive and often ludicrous answers. Interestingly he only returned to the podium to field a question from a German reporter which his selective hearing picked out through the English voices. The German journalist kindly switched to English to make his point about the lack of respect Blatter was showing them. Blatter’s response? To suggest that rather than a lack of respect, he was showing elegance something lacking from the journalists in his opinion. The man is a performer, of this there is no doubt.

After all of this and the continued allegations one would think, and it has been suggested by many, that Blatter’s position is untenable and that the end is nigh for FIFA in its current form, however the feedback from international FAs is quite different. With the glowing endorsement of the Lithuanian FA, who described Blatter as a “Superman”, we get to the real problem with the English FA’s attempt to rock the boat. We are just one nation amongst 208 FIFA member countries. We are in a position whereby we can turn our noses up at the corrupt Executive Committee members and demand FIFA clean up their act. We have the richest league in the world and the longest footballing heritage. We will abstain from the vote and at the least rile Sepp Blatter and his cronies who, as the World Cup bid showed, do not like us much anyway.

For small nations like Lithuania or, wait for it…. Turks and Caicos Islands, yes they have an FA, and yes they get a vote, annoying Mr. Blatter could be disastrous. Why should they want to “Clean up FIFA”, until now it has never done them any harm, a training centre built here, a friendly match arranged or a guest appearance from a World Cup winner may well have made their year and they are not going to jeopardize that for the sake of England’s high moral standards. These small nations will never be going for a world cup, so if that was fixed who cares? Blatter has done what he needed to make sure he got support from the majority of the 208 members, he knows a vote is a vote and couldn’t care less is the US, Australia, England, Scotland and Canada ALL called for a halt to proceedings, it still wouldn’t make a difference. Blatter and his gang set up FIFA to be untouchable and that is what it is.

In a world where corruption is widespread and in many countries, including in the Middle East where I work, it is the norm there is no case to answer for FIFA. If every decision maker in the relevant FAs are being kept happy by bribes and gifts or even just favorable treatment then of course they will not bite the hand that feeds them. With a huge number of the 208 countries, defined as emerging nations or economies a different set of morals apply. I am sure that even at the FA when they host guests the occasion is lavish and no expense spared, for many of these developing countries FIFA’s behavior is just an extension of this. For the first time emerging countries are getting preferential treatment, as Qatar ridiculous World Cup bid highlighted, so why would they want to support England, the nation that has it all?

We need to change FIFA from within, and I think we have gone about the task horribly. For starters we have not put forward an alternative candidate. So currently we are saying #blatterout and #changeFIFA but without an alternative. Currently Blatter is right when he says he is the best candidate, as he is the only candidate. The FA were all happy to support Bin Hammam because he was an alternative to Blatter whom quite simply they don’t like, without considering whether he was clean or the right man for the job. Now we are left in a situation whereby FIFA have their own laws. They can arbitrarily suspend or sack whoever they like and if there is evidence that one of their members is guilty of corruption they can choose to ignore it and deny the existence of any evidence. With no independent body to audit FIFA or regulate them we are left with the biggest game in the world being governed by a dictatorship, and if recent political events in the Middle East have shown us a dictatorship is not easy to overthrow and it is unlikely to be done in 48 hours. I just hope the media and relevant FA’s do not give up hope after today’s coronation.

Sadly the huge support by footballing super-powers such as Congo, Haiti and Cyprus was mirrored by the rest of the world with the FA’s vote for postponement shot down 172 to 17. The issue lies in the fact that each nation has one vote when each nation does not contribute an equal amount to world football. Blatter knows the more small nations he registers to FIFA the more support he will get. All he needs to do is keep the heads of every countries FA happy and he will forever sit on his throne. The only viable solution is for the FA to form a break-away association with the 30 or so major footballing nations, leaving FIFA essentially powerless in world football. It is only the big nations that are not reliant on FIFA who will make this stand as they are economically powerful enough to do so and dwarf the other 180-odd nations. FIFA will not change in its current state, as I said before the small nations are perfectly happy with the corruption as long as it does not affect them, as they showed in their overwhelming support of Sepp Blatter today.

Moving forward Blatter is looking to further strengthen his position. The two major initiatives he speaks about will result in further empowering the people that have got him there and supported him against the accusations of the Executive Council who it appears have turned on each other as well as him. With a massive lack of support from his former allies he has proposed a change to the rules so that the 208 FIFA members vote on where the World Cup will be held and not the Executive Council, they will still however make recommendations (presumably based on who offers them the best bribe). Furthermore the ethics committee will now elected by the FIFA members, he proposed, which will of course make it even less independent and more susceptive to corruption. Blatter is clearly committed to cleaning up FIFA from within, which as we all know is a favorite tactic from most dictatorships, has even said he wants to “keep it in the family”. After being re-elected today Sepp Blatter is in his strongest ever position and will not be easy to budge, especially with such a large and supportive family.

Julio Gronadona hammered the final nail in the coffin calling English FA’s accusations lies, and telling the English media to leave the FIFA family alone. His uncensored diatribe told the world that FIFA did not want anyone snooping in their business anymore, and the doors of the FIFA house were firmly shut. This hardly echoes the words of Sepp Blatter who was careful to make sure he mentioned the importance of transparency.