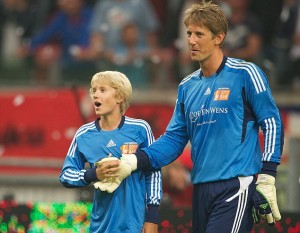 When your father has played 950 games, won trophies with four European clubs, been selected for numerous goalkeeping awards, and installed himself as one of the greatest of all-time in his position, you could be forgiven for feeling the pressure of having to live up to the family name, should you choose the same career path.

Indeed, this is true of one young Dutchman who is setting about cementing his own reputation between the posts. Joe Van Der Sar, only son of The Netherland’s most capped footballer of all time, Edwin, is one who has not gone unnoticed from the eyes of some of Europe’s top clubs. The question remains – will success breed success in the Van Der Sar family line?

Joe is one of a number of ‘famous sons’ who may be in line to come through the ranks of youth football in the coming years and reignite the family names who have left the green grass to move into coaching roles, or simply moved away from the game entirely. Enzo Fernandez (son of Zinedine Zidane), Isaac Drogba (Didier Drogba) and of course Brooklyn Beckham (David Beckham), among others, are great prospects given the almost immortality of the generational names that they hold. As for Joe, becoming a goalkeeper seems almost pre-determined for him, given his father’s reputation. When football fans hear the name Van Der Sar, they think shot-stopper, height, and perhaps most important of all, consistency between the posts at all levels.

Joe was perhaps first seen by the public in the same way many footballers’ children are seen – during post-game pitch celebrations for victory or end of season on-field parades. When Edwin saved a crucial penalty to see The Netherlands past Sweden 5-4 in the Euro 2004 Quarter Final shootout, many witnessed a young, albeit tall, six year-old boy enter the field in his Dutch goalkeeper kit, celebrating in his father’s arms. On the field, Joe made his mark in his home country in the same fashion as his father, lining out for VV Noordwijk’s youth setup. This came not long after experiencing life at Old Trafford, training at underage level and getting some time developing his skills, all the while having his father watch on. Edwin’s retirement in 2011 brought about an end to the career of one of the great goalkeepers, but offered more time to nurture the development of the future Van Der Sar.

The most recent move for Joe, and indeed the whole family, has seen him sign for the renowned Ajax Amsterdam Youth Academy. Joe will begin life in the ‘B’ squads, alongside another recognizable family name in Justin Kluivert (son of Patrick). Many of the Dutch greats – Marco Van Basten, Dennis Bergkamp Frank and Ronald de Boer among others – have emerged through this system, as did several other international stars – Christian Eriksen and Thomas Vermaelen, to name a couple. Of course for Joe, perhaps the most notable name is that of his father. If success doesn’t necessarily breed success for Joe, it certainly follows him, as Edwin is now central to the marketing aspects of Ajax. Whether it happened out of sheer luck or by plan, Joe and Edwin are matched in similarity of clubs – VV Noordwijk, Ajax and Manchester United. It does seem, however, that this is not by chance.

The obvious relationship the two hold together is more than family, it is also professional. Joe made perhaps his most notable public appearance to date, lining out in his father’s testimonial for a young Manchester United U13 side against Ajax U13. A sold-out ArenA in Amsterdam would be something any young, ambitious footballer would relish, let alone for Joe, whose appearance was perhaps more significant than others given the nature of the night in question. Despite only turning sixteen in March of this year, Joe has already been through many experiences that most fledglings would not experience in a career. An opportunity in two recognized, world-class youth systems at Manchester United and Ajax, an appearance in front of 52,000 people at Ajax Amsterdam, gracing the same pitch as some of the world greats, and being acknowledged by Sir Alex Ferguson, among others.

Is it a guarantee that Joe succeeds and makes the desired breakthrough? At Ajax, he has been given the opportunity to find his feet under one of the great systems of football, and under the leadership and management of some of the past Dutch stars who know the academy so well – Frank De Boer and Wim Jonk for example. It has been seen that it isn’t always an instant success though. Kasper Schmeichel is similar to Joe and makes an obvious comparison (aside from the natural blond hair) – a goalkeeper following the footsteps of a father whose name is synonymous with stature and greatness. Kasper was forced for a number of different reasons between clubs in the English divisions for a number of years, meaning his chance to fulfill his top-tier potential still hasn’t fully been realised. At aged 27, Schmeichel has made only four national appearances for Denmark. While Joe is naturally too young to fulfill the international dream just yet, his career beginnings are steering him in the direction of the ‘Oranje’ shirt.

Will it be the number 1 shirt? Only time will tell for Joe. One thing which could stand to Joe is the age profile of the current Dutch goalkeepers. With current goalkeepers Maarten Stekelenburg, Tim Krul, Michel Vorm and Jasper Cillessen all boasting less than 100 caps between them – primarily due to Edwin’s almost immovability  from the position for so long – and all aged twenty-five and above, there is room for another Van Der Sar to find his place in the squad in the future.

When you look through the photos and clips of Joe in action it is hard not to make comparisons to his father. The long, stretching dive, the desire to command the area with an open-mouth bullish roar at those around him, but the equal calmness and maturity that were all associated with Edwin. All in evidence at aged sixteen. For Joe, the family name will bring about pressure and obvious expectancy, but the opportunity to write a new chapter in the family history is there for the taking, and those around him will be vital to this. That young boy who celebrated with his father in Euro 2004 donned the bright-orange bleached hair for the occasion. Will we see him do likewise for his country and represent the ‘Oranje’ and continue the Van Der Sar tradition of goalkeeping excellence?

Mullingar-born, Manchester United and Sligo Rovers fan. Travelled the world from Alaska to Bermuda, Chile to China, Laos to Hawaii and The Arctic Cirle. Primary School teacher in Dublin, tend to talk a lot about football and sports. Have a love of stats, old footballers from the past and Football Manager!