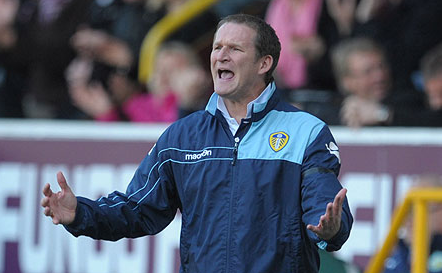 There was a sad inevitability about Simon Grayson’s sacking by Leeds United on Wednesday lunchtime. A 4-1 home defeat to Birmingham City was the straw that broke the camel’s back, but it seems that the former Blackpool manager has been used as a scapegoat by under fire owner Ken Bates.

Protests against Mr Bates preceded Ipswich’s visit to Elland Road two weeks ago and were prompted by the club’s acceptance of a bid for captain Jonny Howson. Howson’s subsequent departure to Norwich made him the latest in a long line of star players to have left Leeds recently and has angered fans who feel let down by the club’s inability to keep hold of its prize assets.

What makes this most recent exit worse is that 23 year old Howson was an idol on the terraces, having come through the youth ranks at Elland Road and racked up nearly 200 appearances for his hometown club.

Crucially, there has been a striking similarity in many of the high profile departures from the club in recent times. All have either been sold with a year remaining on their contracts or picked up for nothing after they had been allowed to become free agents. Both Bradley Johnson and Jermaine Beckford left on free transfers and Kasper Schmeichel and Max Gradel took flight with just 12 months left to run on their deals. Howson himself was in the last six months of his contract when sold in the last transfer window.

The point to be made is that this inability or unwillingness to tie key players down to longer contracts has quite severely hamstrung Leeds United’s efforts to return to the Premier League. It is not abundantly clear whether this was the manager’s policy or that of the chairman, yet it seems much more likely to be the action of the latter. No manager can be happy to lose so many of his key players without being given the funds to replace them.

It seems that Grayson remained acquiescent to the club’s transfer policy out of a love for his boyhood team and has been punished for showing a greater tolerance than would have been shown by many of his contemporaries.

Over the past three seasons, Leeds have made a profit of around £10 million on player sales, after acquiring replacements. These new recruits have come largely in the shape of free transfers and loan signings, a recipe that rarely breeds consistency. The current squad consists of four loanees and there have been fourteen temporary signings in just the last one and a half seasons. No matter what one may think of the size of the club and the place it should occupy in the football world, the investment made in the playing squad does not merit a promotion challenge.

The murky circumstances under which Bates came to own the club have added further to the discontent amongst the Elland Road faithful. I know from previous experience that tickets at Leeds don’t come cheap and when the fans see investment lavished upon corporate facilities at the stadium rather than players, conflict is understandable.

If one is looking for a further example of a lack of ambition at board level, then one need look no further than the timing of Grayson’s dismissal. Coming the day after the closing of the transfer window, it renders Bates’ purse strings suitably tight for when a new manager arrives, thus avoiding the staple call from a fresh incumbent to be given funds to work with. One may have thought that the decision would have been made at the end of a December in which Grayson’s men had just picked up four points as opposed to a reaction to a first defeat in four, as the Birmingham result proved to be.

It seems that Bates has offered his manager up as a sacrificial lamb in an effort to deflect attention away from the way he is running the club. However, if he continues to sell off the team’s best assets without reinvestment, then it is hard to see where many managers could improve on Grayson’s achievements.

On reflection, the importance of the job that he did for Leeds must not be forgotten. Joining a side floundering in League 1 midway through the 2008-2009 campaign, Grayson led them to the play-offs that season and then to automatic promotion in his first full year in charge. A seventh place finish in the Championship followed in 2010-2011 and, at the time of writing, the club sits just three points of the play-off places.

Given that he has had one hand tied behind his back with regards to transfer dealings this record constitutes an impressive return. His critics would do well to remember that the size of the club itself is incongruous to the investment and ambition currently being shown. It appears that the focus should be shifted to the problems in the boardroom rather than on the training pitch.