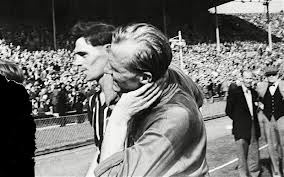 It’s said that football was a hard man’s game in the past and that “They don’t make ’em like that any more.”

Surely that phrase could have been coined for legendary German goalkeeper Bert Trautmann.

Speaking of the 1956 incident which made Trautmann a figure known around the world, even in those pre widespread TV/internet days, Trautmann told the Guardian newspaper: “I remember I was coming out to cut out a cross and Peter Murphy, the Birmingham striker, came in to challenge me.

“When we collided it was like two trains hitting each other – neither of us could stop and we crashed into each other at high speed. His thigh caught me in the neck and I was knocked unconscious.”

Trautmann was born in  1923 and grew up in a Germany which was deeply affected by inter war strife. He joined the German Luftwaffe as a 16 year-old during the early stages of World War II and served as a paratrooper. He served for three years before being captured by Allied troops and was brought to the Lancashire area of northern England as a Prisoner of War.

Trautmann refused an offer of repatriation, and following his release in 1948, he settled in Lancashire, combining farm work with playing as a goalkeeper for local football team St. Helen’s Town.

Football League clubs became aware of Trautmann’s talent as a goalkeeper and shortly after the start of the 1949-’50 season, Manchester City signed the then 26 year-old. The club were playing in the top flight of English football (the old First Division) and it wasn’t long before Trautmann became their first choice goalkeeper.

The club’s decision to sign a former Axis paratrooper sparked protests, with 20,000 people attending a demonstration. Over time, Trautmann gained acceptance through his performances in the City goal, playing all but five of the club’s next 250 matches as he became a more than able replacement for the legendary Frank Swift.

In 1956 Trautmann was voted FWA Footballer of the Year and it is of course his performance in that year’s FA Cup final for which he will always be remembered. With 17 minutes remaining and with his side very firmly on the back foot, Trautmann dived at the feet of Birmingham’s Peter Murphy to win the ball, but in the collision Murphy Trautmann was knocked unconscious, and the referee stopped play immediately.

The City physio rushed onto the pitch, and treatment continued for several minutes. No substitutes were allowed in those days, so City looked set to see out the game with ten men if Trautmann was unable to continue – as seemed certain given the ‘keeper’s angst. City captain Roy Paul felt certain that Trautmann was not fit to continue, and wanted an outfield player to replace him between the sticks. Trautmann though, dazed and unsteady on his feet, insisted upon keeping his goal.

He played out the remainder of the game in great pain, with the Manchester City defenders attempting to clear the ball well upfield or into the stand whenever it came near. Trautmann was called upon to make two further saves, the second causing him to recoil in agony due to a collision with an opponent, which once again required the trainer to revive him.

Manchester City would hold on to their lead and when the final whistle blew the Wembley crowd of just over 100,000 souls serenaded the brave custodian with a rendition of “For he’s a jolly good fellow” and the German was unquestionably the man of the match. When a scan three days later revealed that Trautmann had broken a bone in his neck, his place in football folklore was assured forever.

Lev Yashin, the man hailed by many as the greatest goalkeeper of all-time (and still the only goalkeeper to be voted European Footballer of the Year) said shortly before his 1990 death:  “There have only been two world-class goalkeepers. One was Lev Yashin, the other was the German boy who played in Manchester – Trautmann.” May he rest in peace.