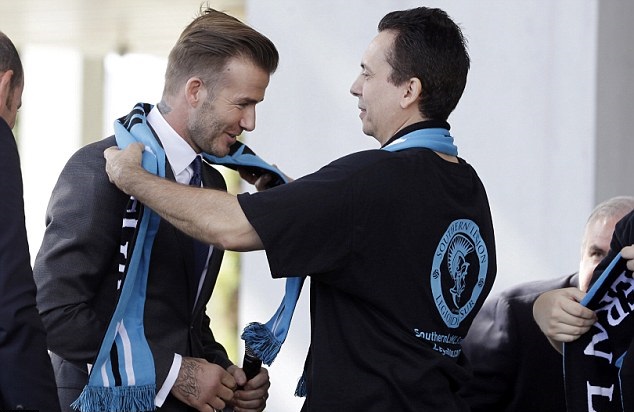 In truth, David Beckham was not the greatest footballer to ever grace American shores.

However, there seemed to be one crucial difference between these NASL superstars and the Englishman.

Beckham arrived to an increasingly soccer-hungry nation that had not witnessed such a huge foreign name for 25 years.

The Englishman, as the most recognisable name and face in football in the most groundbreaking technological era, looked to be the perfect MLS ambassador.

Yet, ironically, at his unveiling seven years ago, few would have seen this as a realistic crusade for Beckham.

Instead, the crowd was dominated by the world’s glossy media and ‘day-tripping fans’.

Complete with a bleached streamline and Ralph Lauren suit, amid the tickertape, there was very little mention of the word ‘soccer’ by Beckham.

Rather, the focus was unsurprisingly on marketing, amid a sudden and unexpected increase in AEG’s standing in Asia, and the Galaxy agreeing a record-breaking $20m five-year shirt sponsorship deal with Herbalife.

Thus, it seemed, Beckham had given up on his competitive playing career – with reaching 100 caps for England a submerged fantasy.

Instead, the $255 million Beckham was to earn in the following five years was the most widely-scrutinised aspect.

Beckham, like many of the glamorous veterans that had arrived in the NASL decades previously, was expected to take his money and run.

It led to Beckham’s commitment being continually questioned: loan spells to Milan in 2009 and 2010; constant niggling injuries; and numerous cross-Atlantic trips to maintain his England career.

It all crystallised in a high-profile clash with a boisterous Galaxy fan after a friendly against, ironically, Milan in July 2009.

Yet, having been instrumental in LA Galaxy’s landmark MLS Cup wins in 2011 and 2012, the Beckham Experiment was eventually deemed a success.

After all, Beckham’s five-year spell coincided with the establishment of franchises such as the Seattle Sounders, Philadelphia Union, Vancouver Whitecaps and Portland Timbers.

There was also the growth in average stadium attendances by 7.2%, with the MLS’ average of 17,852 being the 10th highest in the world.

Indeed, too, amid the Beckham wave, the likes of Tim Cahill, Robbie Keane, Torsten Frings, Thierry Henry and Rafa Márquez all departed Europe for MLS. 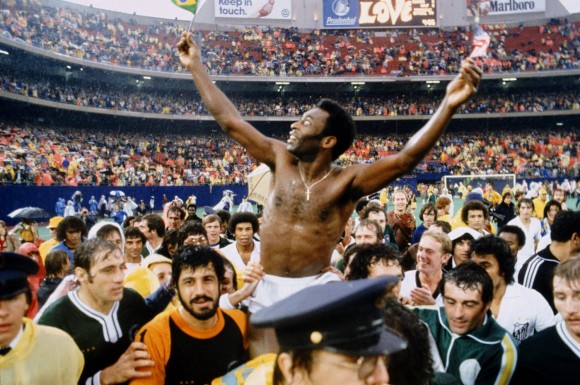 Thus, arguably, the only comparison to Beckham’s legacy was Pelé – who also arrived as the world’s most recognisable footballer in 1975.

The 35-year-old spent just two years in the US, with the New York Cosmos, but increased soccer’s profile to unprecedented levels.

However, the Brazilian would not again have any formal involvement with American soccer until his appointment as honorary president of the Cosmos 34 years later.

It was a wasted opportunity, amid the NASL’s botched, ill-advised and rapid expansion after his departure.

Beckham, meanwhile, dismissed further brand-widening interest from the Middle East and Australia after leaving the U.S in order to play for free for PSG for six months.

The Englishman, admirably, donated all of his £3.4 million salary to a local charity and played an influential role in PSG’s first Ligue 1 title for 19 years.

Beckham never forgot MLS, though, and the clause in his contract with the Galaxy – which allowed Beckham to purchase an MLS franchise for 25% of the market price – was never far from his thoughts.

Rather than this being an act of ego, Beckham’s mantra of bringing soccer to the U.S feels genuine.

Of course, there are the army of glamorous contacts Beckham will be able to call upon to join his project in 2017, but there are even greater positives.

Beckham, tellingly, is the first former player to become an owner; wants to privately fund the building of the franchise’s new stadium; and plans to build a sustainable football project, with a focus on academy development of both Americans and Mexicans.

Admittedly, previous incarnations in Florida suggest it will not be so clear-cut but one thing’s for sure: Beckham is already on course to leave an unprecedented foreign legacy in American soccer.