To complete a fine day of football action, which began in Wembley with Ian Holloway’s Blackpool winning a coveted Play-Off promotion to the Premier League, Louis van Gaal’s German League and Cup champions Bayern Munich faced his old “student” Jose Mourinho and Inter Milan to decide who are the Champions of Europe. 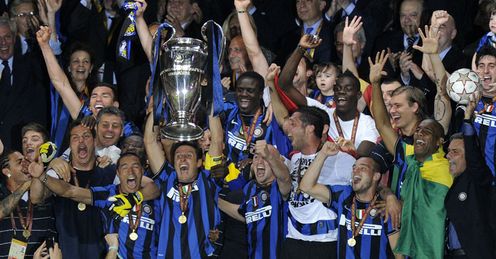 And like Pep Guardiola’s magnificent Barcelona side last season, both these managers were looking to top of a perfect domestic double with a third trophy in European competition.

The game started off very evenly, with Arjen Robben grabbing much of the attention down Bayern’s right hand side, cutting in regularly as he likes to do so. The Dutchman, who played under Mourinho at Chelsea, was hacked down by Walter Samuel early on as a reminder that it won’t be the easiest of ninety minutes.

In a heavily attacking side, Mourinho’s men managed to break on a few occasions but spent most of the first half pegged back in their own half, but with numbers behind the ball Bayern found it utterly impossible to find a crack in the wall. Two of Inter’s on target attempts came via a long range free kick courtesy of Wesley Sneijder, however neither were a cause for concern for Hans-Jörg Butt.

Sky Sport’s coverage were not shy in reminding us of English referee Howard Webb’s involvement in the event, and he handed out the first yellow card of the night to Martin Demichelis for a reckless tackle on Diego Milito. Christian Chivu swiftly followed him into the book by clipping the heels of Robben, before Thomas Müller shot in vain from thirty yards out, clearly frustrated by the defensive barrier Inter had put up.

But it came from a good old piece of route-one football that Inter managed to fire into the lead. A long ball forward from Julio César which was knocked down by Milito to Sneijder. The Argentine made a threatening run into the Bayern box and from a lovely through ball from Sneijder chipped past Butt for the all important opener. A fine piece of finishing from Milito, who just barely managed to get into the Argentinian World Cup squad despite his thirty-goal season.

Bayern were not able to hit back an equaliser, as Inter were happy to continue sitting behind the ball for the remaining moments of the half. Inter came close to doubling their lead on the half, as this time Milito was the creator for Sneijder to strike straight at the relieved Bayern goalkeeper from close range.

After the interval, the best chance of the game for the Germans fell to 2o-year-old Thomas Muller, but his shot was saved by the legs of Julio César. Immediately after that chance, Butt managed to fingertip a Pandev strike over the bar.

After more pressure from Bayern, Inter broke in the 70th minute. Milito, managing to stay onside, received a ball from Samuel Eto’o before probing into the box, beating Daniel van Buyten with ease, before coolly slotting it into the far corner to ensure victory and a magnificent treble for the Italians.