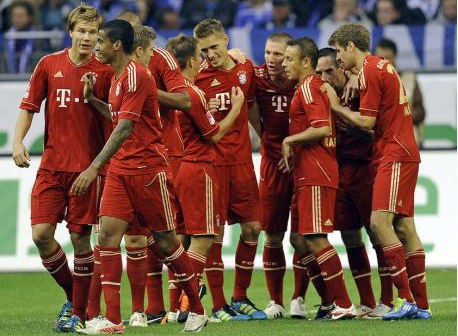 Bayern München have not had the toughest of fixture lists to start their campaign, with Hamburg, Freiburg and Kaiserslautern, among the weaker starters this season, easily brushed aside by the Bavarian giants. So this weekend represented an important challenge for them, in possibly their first test against a ‘big club’ this season. But Bayern were just as assured in victory against Schalke 04 as in previous weeks, and it was a quiet afternoon for Manuel Neuer in the Bayern goal on his much-publicised return to his former club.

The leaders ran out 2-0 winners in Gelsenkirchen to keep up their impressive record of five consecutive wins, and five consecutive clean sheets in the league, not conceding a goal in any competition since the opening day of the campaign. The €40 million spent on their back-line has certainly helped Bayern’s stats, but a greater focus on the balance of the team has been a feature of Jupp Heynckes reign so far. Team ethic may have been a crucial element to Bayern’s early success, but it was a moment of individual brilliance from Franck Ribery which set-up their opening goal this weekend. An electrifying run and deft pass set up Nils Petersen to score, and Thomas Müller sealed a comfortable win with a close-range finish in the second half.

An interesting observation from the match is that, in the absence of Mario Gomez, the league’s leading scorer with eight in five matches, the replacement Petersen stepped in and made an important contribution. The young striker, handed his first start, took his finish well for the opening goal. Crucially, the absences of Bayern’s important players, Gomez and, to a lesser extent, Arjen Robben, have not been felt. This asset is only enhanced when compared with champions Borussia Dortmund, who have evidently been hit hard by big players missing, and a lack of conviction by their replacements. Bayern’s squad looks much stronger than their title rival’s.

Indeed, Dortmund were beaten again this weekend, falling to a 2-1 defeat against Hannover 96, and lost both matches of Mario Götze’s two-game suspension. That said, this was a match the visitors really should have won. With other key players missing, a big performance was required of Shinji Kagawa, who duly responded. He came to life on the hour mark, making a superb run to nearly break the deadlock, before another well-timed dart through the middle and expertly-executed finish gave Dortmund the lead. They had led up until the 88th minute, but gave away two goals at the death to lose the game, the first a headed finish from Karim Haggui, moments before Didier Ya Konan’s superb 25-yard strike won it for the hosts, after Dortmund’s curious substitution of arguably the league’s best defender Mats Hummels ten minutes from time. It was a bitter blow for Dortmund who have now lost three of their first six matches, and are without an away win since February.

In the other weekend matches, it was something of a ‘Derby Day’, with games between close rivals Bayern Leverkusen and Köln, and the Rheinland-Pfalz derby of Kaiserslautern and Mainz. Leverkusen fell to a shock 4-1 home defeat against their fellow Rheinlanders. Leverkusen’s defensive frailties were on show again, as Lukas Podolski drove his side to victory. The attacker’s spot in the national team could be under threat ahead of Euro 2012, with his comparative selfishness and technical weakness a possible hindrance to Germany’s ambitious plans. But the striker was excellent here, giving opposing centre-back Stefan Reinartz a torrid afternoon. He squeezed (rather easily) between Reinartz and Ömer Toprak to assist Milijove Novakovic for the visitors’ opener, before finishing a wonderful counter-attacking move to make it 2-0, helped out by some weak tackling, and finished excellently for the Effzeh’s third to ease the pressure on coach Stale Solbaaken.

It was a horrid day for Leverkusen, confounded by André Schürrle’s red card late in the game, meaning he will miss Leverkusen’s next two matches, including a crunch tie with Bayern München next weekend. But Köln’s suffered arguably a bigger blow, losing influential central defender and captain Pedro Geromel to injury. The Brazilian requires knee surgery, which likely means a lengthy layoff for the excellent centre-back, so important to a team with the defensive frailties of Köln. Kaiserslautern’s 3-1 victory over Mainz was their first of the season, sending their opponents to their third defeat in four matches.

1899 Hoffenheim downed VfL Wolfsburg 3-1 to continue their excellent start to the season. Keep an eye on this blog for a closer look at Hoffenheim’s season in the coming weeks. Werder Bremen earned a plucky 1-1 with Nürnberg, playing most of the match with 10 men after an early red card for goalkeeper Tim Wiese, while Hertha Berlin and Augsburg shared a 2-2 draw, and VfB Stuttgart beat SC Freiburg 2-1.

Finally, Hamburger SV boss Michael Oenning has become the first managerial casualty of the season after another defeat for his team, losing 1-0 at home to Borussia Mönchengladbach. Unpopular and under pressure for the entirety of his reign as coach, Hamburg have had an awful start to the season, with just one point and 17 goals conceded from their six matches. Meanwhile, Mönchengladbach continue their stunning progress under coach Lucien Favre (I wrote more on the Foals’ 2011 turnaround last month) and look a genuine force this season. Since Favre took over, only Bayern München and Bayer Leverkusen have won more points in the Bundesliga than Mönchengladbach.