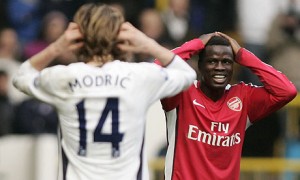 The first weekend of October beared witness to a full-fledged schedule of Premier League matches, with a number of high-profiles local derbies taking place. The two biggest matches of the weekend took place on Sunday and saw two local rivals battle for the three points, Arsenal travelled to nearby Tottenham Hotspur and Everton welcomed Liverpool.

The weekend started at Goodison Park, where Everton entertained city rivals Liverpool in Saturday’s lunchtime kick off. The Merseyside derby has become famous over the years for its physicality and sending offs, this match up looked to follow the same pattern when Martin Atkinson was appointed as the game’s referee, Martin has sent off more players than any other official in England’s top-flight this season, so a red card or two was looking inevitable.

A legitimate tackle on Luis Suarez left Everton a man down for the majority of the game when Jack Rodwell was dimissed mid-way during the first half, replays showed that it was not a two-footed and particularly dangerous challenge, and was not intended to be malicious. Regardless, Everton were left with 10 men for the rest of the Merseyside derby.

Just before the half time whistle, Liverpool were unlucky not to break into the lead after Luis Suarez was brought down in the box by Phil Jagielka, with Kuyt hitting the penalty low to the left of Everton keeper Tim Howard, who saved the effort. A few minutes later, Kuyt supplied Charlie Adam with a brilliant ball, Adam hit the effort a little too high from 25 yards out, hitting the woodwork. An excellent if not a little unlucky effort from the former-Blackpool man.

In the second half, a wonderful effort from Saha saw Andy Carroll’s on-target header saved on the line, with Kuyt attempting to hit it on the rebound but ultimately seeing the ball wide. Everton continued to put the pressure on Liverpool, who were looking by far the better team in the second half, but with no goals to show for their dominance. Not even five minutes after his introduction, Welsh international Craig Bellamy made a beautiful run down the left flank to play in Jose Enrique, who’s cutback to Andy Carroll saw the former-Newcastle striker hit home to light up the Red side of Merseyside.

After a few close calls, Everton couldn’t get back into the game and saw their fate sealed when a defensive blunded between Leighton Baines and Sylvain Distin gave Luis Suarez the perfect chance to ripple the back of the Everton net, that he did too. A well-deserved three points for Liverpool, who are looking rather impressive after seven games in the English top-flight.

This London derby saw former-Arsenal man Emmanuel Adebayor play in front of a travelling contingent of his old fans, Adebayor, now playing for Arsenal’s rivals Tottenham, looked to make a good name for himself in this exciting fixture, and that he did too. The match lived up to be the same exciting match-up that it was being billed as in the media, a 19th minute effort from Gareth Bale found Van der Vaart, who could not quite get his shot on target. After a few minor early chances, Emmanuel’s biggest influence of the first half came in the 40th minute when his beautiful chip found Rafael van der Vaart, who after controlling it nicely with his chest, shot the ball past the Arsenal keeper and take the Spurs into the lead in front of a noisy home crowd. The arm of Van der Vaart looks to have played a part in Tottenham’s opening goal, meaning that he should have had a second yellow card, leaving Tottenham 10 men down. The officials didn’t see the offence however, and the goal stood.

The second half saw Kieran Gibbs’ long cross found Aaron Ramsey in the 51st, the Welshman’s well-hit shot beat the Tottenham defence and keeper to get the equalizer for the gunners. The Spurs got their second and the game’s final goal when a fine effort from Walker in the 73rd minute beat Sczezny in the Arsenal goal to seal the three points.

Swansea City’s team is full of small in stature, yet incredibly pacey players, yet Stoke are almost the complete opposite, a medium-paced, very physical and large in stature team. This one was set to be a cracker, and a cracker it was. Scott Sinclair scored a 9th minute penalty to take the Welsh side into the lead at the Liberty Stadium on Sunday, with Danny Graham sealing the deal with five minutes to go, passing it behind the Stoke keeper and into the net. After a mediocre start to their Premier League campaign, Swansea are looking like a side to watch this season.

The two nil score line slightly flattered the Manchester United side on Saturday, with Norwich dominating the game for large spells of the game, and at times looking likely to get something from the game. Ultimately though, Manchester United’s class shined through and after a 68th minute Anderson goal, assisted by Wayne Rooney and a Danny Welbeck effort three minutes from time, Manchester United ran away from this fixture with the three points.

Saturday saw new boys QPR’s demolition at the hands of Europa League veterans Fulham, who trashed at away side 6-0 at the cottage. Bolton also saw a large defeat at the hands of Chelsea, who won 5–1 on the day and are looking like championship contenders this season. Manchester City scored four when they travelled to lowly Blackburn, there are calls from Blackburns fans for the dimissal of their manager, Keane. Newcastle beat Wolverhampton Wanderers 2–1 in an average showdown in the midlands, Wigan received at a 2–0 loss on the road at Aston Villa and West Brom picked up a point by drawing 2 -2 with Sunderland on Saturday.