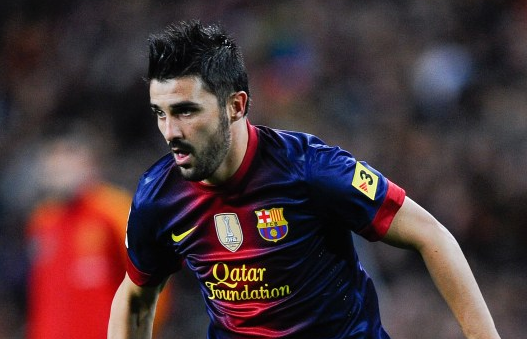 Barcelona were 2-0 up against Milan, the scores were tied on aggregate and the next goal of a tricky Champions League encounter was surely going to decide which team progressed to the quarter finals. The ball fell to Xavi and his peripheral vision allowed him to slide a pass first time towards David Villa. The through ball committed Milan full-back Kevin Constant, and Villa’s first touch swept the ball beyond the onrushing defender, leaving him in a heap on the ground before curling a deadly shot past Christian Abbiati and in to the far corner. Barca had breathing space, and it was thanks to Villa’s prolific finishing ability.

The goal sparked mighty relief for David Villa, that much was clear from his celebration. It was the goal that re-announced the striker’s return to form on the world stage after a devastating leg break that had kept him out of action for eight months. A snap to his tibia during a Club World Cup match in Yokohama meant he missed the entire 2011/12 season with Barcelona, and also Euro 2012, as the Spanish team continued their International dominance. After three consecutive La Liga titles with Villa fit and ever present, Barca surrendered top spot to Real Madrid during his injury plagued season, which looks to be far more than a coincidence. The striker, despite scoring against Real Sociedad on his return to competitive action, took some time to rediscover the form he was showing before that fateful injury, and there were even rumours that he might be sold in January to the likes of Arsenal or Manchester City.

The goal scoring exploits of Lionel Messi have rescued Barcelona in the absence of David Villa as the side continue to alternate their three forward players. Alexis Sanchez was signed from Udinese to try and ease the blow dealt by Villa’s leg break, but the Chilean’s first La Liga campaign was also mired with short-term injuries. His approach was seen as a little direct and it took some time before he was able to adapt to the pass and move philosophy of Barca, as Guardiola often used him as a central striker. However, the intelligence of Cesc Fabregas was sometimes preferred in a false number 9 role. Pedro has become an accomplished winger come striker and can operate on either wing for the Catalan side, but his goal threat and ratio are nowhere near the levels of his compatriot Villa.

Villa’s left foot finish last night showed that he has certainly not lost the killer ability to score goals. It is hard to stand out in a team that includes the record-breaking Lionel Messi, but this is a player who has won the European Championship Golden Boot, the World Cup and is Spain’s all time top goalscorer. He has scored 53 goals in 86 appearances for his country, a ratio matched only by Alfredo Di Stefano. He was named the Spanish player of the year in 05/06 whilst playing for Valencia who finished third as he contributed 25 league goals.

Barcelona are on course to win the league title as they sit thirteen points ahead of Real Madrid and they are the strongest team left in the Uefa Champions League. If they are to claim a double, keeping David Villa fit is imperative. He showed his value to the team against Milan and his passion and work rate are hard to match. He has the ability to score important goals in important matches, which is exactly what Barca need during their challenging run in. To let him go would be a huge mistake. I bet they’re glad they didn’t in January.

One thought on “Barcelona should keep hold of David Villa”