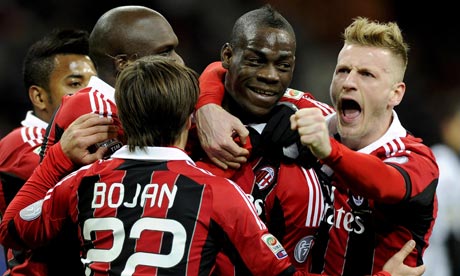 Despite a self-depicting statue, a new supermodel girlfriend, gatecrashing Brazil’s mixed zone in a towel, smoking on a train, suffering racist abuse, and Milan ultras clashing with police upon his unveiling, it has been one of the quieter periods of Mario Balotelli’s life.

Far from coincidentally, this has led to Balotelli undergoing the purple patch of his career: netting an impressive ten goals in ten games for club and country since 3 February, 2013.

It has also coincided with Milan moving from sixth to third in Serie A – leaping their bitter rivals, Internazionale, in the process – and Silvio Berlusconi’s once-audacious three-year plan now looks to have serious potential.

So, in the past two summers, with the shrewd signatures of the likes Cristián Zapata, Kevin Constant, Stephan El Shaarawy, M’Baye Niang  and, of course, Balotelli, Milan have dealt with the post-Ibrahimović era quite admirably.

Much credit must be awarded to Massimiliano Allegri, who looked a dead man walking as early as September, 2012 – amid Berlusconi’s desperate refrain of Milan saving €150 million from Thiago Silva and Ibrahimović’s depatures to PSG last summer.

Now, the fans, and belief, are returning and Milan are no longer relying on their holding company, Finivest, to ease crippling losses.

Amid Financial Fairplay, financial self-sustainability, in tandem with domestic success, remains Berlusconi’s holy grail but the success of Balotelli has given Milan hope after disappointments like Marco Borriello, Ronaldinho, Klaas-Jan Huntelaar, Robinho and Maxi López.

This new era – without purposefully-planned unveilings inside the San Siro and sentimental returns for the likes of Kaká – was encapsulated in what should have been a low-key arrival for Balotelli at Ristorante Giannino.

The prodigal son had returned: the perfect angle for Berlusconi to, somehow, rebuild his political career as the caring father who had moved on from describing Balotelli as a “rotten apple.”

Still, with his fairly innocent off the field antics of late, already, it seems, Balotelli has proven his doubters wrong and, eventually, continued his good form from Euro 2012.

Perhaps, this should be of little surprise: Milan are Balotteli’s childhood club and even at Internazionale, he never shied from revealing this fact.

Still, the Rossoneri’s fans never interpreted the striker flinging his shirt to the ground after Internazionale’s 3-1 victory over Barcelona on 20 April, 2010 as anything more than an act of petulance.

Now, such is the Milanese hysteria, it was yet another Balotelli primal scream: a cry to cut away from the ill-fitting shirt and inhibitions of Internazionale.

Of course, Balotelli was to spend the two and a half year interlude under the paternal arm of Roberto Mancini at Manchester City but, now, he has been cut loose.

After all, there is no doubting the fact that Balotelli is the pin-up of Milan’s current crop and a guaranteed first name on the team sheet.

It will, inevitably, lead to Balotelli taking Massimo Ambrosini’s mantle of dressing-room leader in the coming years and, clearly, it has stirred something in Balotelli.

Responsibility, ironically, appeals to him – regardless if it is just on the field – and Cesare Prandelli was, arguably, the first coach to recognise this in, bravely, heeding Balotelli’s complaints and starting him in the Euro 2012 quarter-final against England.

Balotelli was unleashed for the rest of that tournament – having previously had an inevitable furl of abuse towards Prandelli concealed by Leonardo Bonucci’s hand in ‘celebrating’ a fantastic overhead kick against Ireland – and scored two brilliant goals against Germany in the semi-final on 28 June, 2012.

So,, while some of the Italian public had struggled to relate to Balotelli’s Ghanaian biological parentage, his post-match embrace with his adopted mother, Silvia, cemented his standing as, quite simply, an Italian: attitude, spunk, a keen maternal bond and a nickname, il Postino. 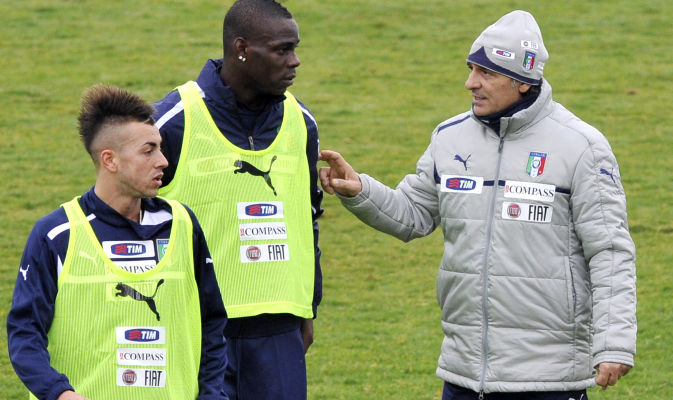 Such is the bond established between Prandelli, Balotelli and El Shaaraway – all as outsiders of sorts, with Prandelli having never managed one of Italy’s traditional top four – Prandelli even declared he would shave two Mohawks into his head if Italy went on to win the 2014 World Cup.

However, returning to England, Balotelli could not replicate this dynamic and, perhaps, it has been little surprise that his career has only seemed to, finally, progress through being involved in Italian football again.

The likable qualities of Balotelli have re-emerged: the camaraderie with his team-mates, the brooding smile rather than the sulking stare, and the joy of being part of a family again.

So, even with near incessant racial abuse again – with even Paolo Berlusconi calling Balotelli “negretto di familia” and Internazionale being fined €15,000 for fans’ monkey noises – Balotelli has not been provoked.

Just like with teammate Kevin-Prince Boateng, it has motivated him even further.

At only 22 years of age, the past two months have been undoubted progress in the life and career of Balotelli – driven by quiet encouragement from Allegri, with extra training sessions and voluntary set-piece practice.

Of course, there always seems to be a setback around the corner for Balotelli – amid a three-match ban for swearing – but the script is written and the stage is set for the prodigal son.