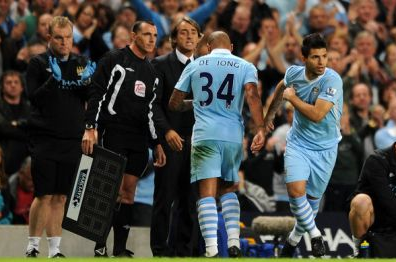 I’m looking forward to another thrilling weekend of Premier League action, but am somewhat perturbed at the fact that next week we all have to politely accept another international break and wheel out the same old pub chat about Fabio Capello’s failure to grasp the English language despite having ‘intensive’ lessons and being paid 10 gazillion pounds a year for four hour days. Ah well such is life.

This weekend’s first bet comes in the north-west where a buoyant Blackburn side take on everyone’s favourite soap opera, Manchester City. Despite young Carlos doing his best to sink the City ship, they should have a field day against a Blackburn defence that practically presents chances like nibbles on a silver platter. There is little value in the over 2.5 goals market and it’s little wonder when you consider that nine of the 12 games involving either side this season has seen three or more goals. A much better bet would be to take over 3.5 goals at a top price of 7/4 (widely available). Three of Blackburn’s six games this season have featured over 3.5 goals, with City’s strike rate is even more impressive at four out of six (three of which were when City were playing away from home). I’m on.

Next up we’re down the road to Old Trafford where Manchester United host Norwich City. ‘Sralex’ will be demanding a response from his players after a disappointing draw with Basel in the Champions League, but as they are likely to again be without the ‘messiah’ Wayne Rooney, can they do it? Well… yes. United should have no problems suffocating the Canaries (sorry, couldn’t resist) and they should run out handsome winners on Saturday. As you would expect there is little value in any market concerning a Man Utd win so instead I’m plumping for Nani as an anytime goalscorer. He looks to have found a spot of form with goals against Chelsea and Stoke and the lack of attacking options means he is likely to a). Start and, b). Get forward and have a few ‘digs’. A top price of 15/8 with Boylesports for Nani to score anytime in a match of this nature is, to me, great value.

The final bet of the weekend is a wager nobody really likes to place. One where you are expecting a drab affair with few goals and a distinct possibility of it being the most boring game of football anyone has ever seen. They type that makes you question why you spend so much of your life watching football and start to consider other, more exciting forms of entertainment like knitting or pouring Tabasco source into your eyes. But this is exactly what I’m expecting from Fulham’s game with QPR this weekend. We all know that Fulham are the perennial ‘settle for a point’ type of team and that has been set in stone after three draws from their three home games this season. A bit like Tim Henman, Fulham occasionally show promise but ultimately fail to deliver and end up flying under the radar and rather ‘making up the numbers’. In QPR they face a team who are failing to turn their new found confidence into goals. Their failure to score in four of their opening six games would be a concern to any manager but the fact that Rangers are creating ample opportunities and not finding the net has potential to be troublesome. I’m backing the draw at best price 16/5 with Victor Chandler and yawning throughout the match.