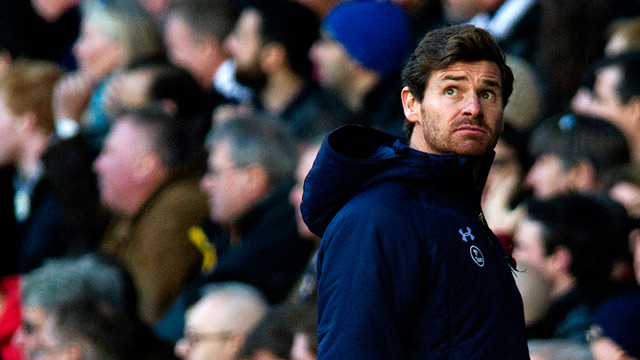 In theory, André Villas-Boas’ difficulties at Tottenham should be of little surprise: there are haunting parallels with his ill-fated eight-month spell at Chelsea.

Remarkably, that is before even addressing what has happened in the 17 months of the Portuguese’s reign at White Hart Lane.

After all, an affable and proven Premier League manager was discarded for a ‘sexier’ alternative: read Harry Redknapp (2012) for Carlo Ancelotti (2011).

Again, Villas-Boas beat off a host of more experienced candidates to land one of the Premier League’s hottest jobs – leading to increased scrutiny, even if the Portuguese did not have a £13.3 million release clause this time.

Also, just like with Roman Abramovich at Chelsea, Villas-Boas is under the command of a rash club figurehead, with Daniel Levy having sacked six managers in the 11 seasons before Villas-Boas’ arrival.

Yet, as 2012-2013 illustrated – accentuated by Villas-Boas’ unleashing of Gareth Bale into a central role – Villas-Boas and Tottenham proved a much better fit.

Hardened by an earth-shattering introduction to English football at Chelsea, Villas-Boas thrived under the opportunity to lead a three-year project at Spurs.

What a contrast this was to the difficulties the then 34-year-old faced in phasing out Petr Čech, Ashley Cole and, particularly, Frank Lampard at Chelsea.

Yet with the departure of Bale and the opportunity to build a squad, not just a team, in his image – alongside technical director, Franco Baldini – Villas-Boas has faced the struggles he had seemed to have banished.

This is despite the fact that Tottenham’s 26-man squad – of which, Villas-Boas brought in 14 members – has an average age of just 25.79 and has firmly been moulded in the tactical vision of the Portuguese.

Yet, few remember that Villas-Boas failed to integrate younger, mouldable players at Chelsea  – they were even kicked out of Cobham’s dressing rooms – and Ryan Bertrand and Josh McEachran made a combined three appearances outside of the Carling Cup during his eight-month reign.

Perhaps, then, it was little surprise that so much was made of Villas-Boas in immediately cashing in Bale’s £80 million fee and having the presence of mind to ‘carefully’ spend it – and £25 million extra – on seven footballers of seven different nationalities who had never played in the Premier League before.

Undoubtedly, the majority of these footballers will thrive in the Premier League within 12 months but the irony is that – with Villas Boas failing to banish title talk – they have had to hit the ground running.

Given how Roberto Soldado is the only one of these seven signings to be aged over 25, this was a huge gamble and, ironically, it is the jaded Spaniard who has struggled the most.

The root of the lack of service and spark of Soldado? Arguably, a failure to land a metronome, a fantasista playmaker like João Moutinho.

This, also, cost Villas-Boas dearly at Chelsea: then, he sought Luka Modrić, who moved to Real Madrid; this time, Moutinho departed for Monaco.

Sure, Paulinho is a dynamic threat but the Brazilian does not offer the creativity or, on the flipside, the protection Tottenham’s central defence desperately requires.

After all, the limitations of Villas-Boas’ high line have again been exposed.

In a forerunner to Tottenham’s disastrous 6-0 defeat to Manchester City at the Etihad on 24 November, the high-risk gamble of a high line was evident in Chelsea’s 3-5 defeat to Arsenal on 29 October, 2011.

Far from coincidentally, these big Premier League matches have been Villas-Boas weakness in English football.

With Spurs, Villas-Boas has a haul of 16 points from a possible 42 (38%) against Manchester United, Arsenal, Manchester City, Chelsea, and Liverpool.

With time and patience, the above-mentioned are likely to improve for the 36-year-old but his now trademark paranoia and sensitivity suggests little has changed since 2011.

It is the Portuguese’s greatest vice and, ironically, it is self-inflicted.

So, while the Mac jackets and touchline squats have disappeared, Villas-Boas has looked even more tetchy than he did at Chelsea and the same media ‘agenda’ accusations have again reared their head.

Then, Villas-Boas was parodied for his stiltedness; for protecting his players by criticising pundits; for demanding his players celebrate in front of him; and for claiming the media were against Chelsea.

Some of these facets were hallmarks of one of Villas-Boas great influences, José Mourinho, but the difference was that Mourinho could back up this siege mentality with results and trophies.

Villas-Boas – even with a more suitable project at Tottenham – has, so far, been unable to do so.

This is why the Portuguese’s criticism of Tottenham’s fans’ support, his handling of Hugh Lloris’ concussion, and his 12-hour sessions at Tottenham’s training ground at Enfield have appeared all the more desperate.

Villas-Boas was eventually met with sympathy in having such a tall order with a Chelsea team in stubborn transition, but a failure to learn from the mistakes of that era could well end up costing him at Tottenham.