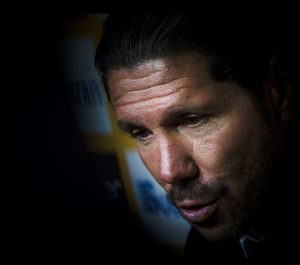 “If you believe and if you work, you can do it.” Diego Simeone’s words were clear on Sunday evening. They were simple, they were true. Speaking at an enormous celebratory parade in the wake of Atlético Madrid’s attritional league-winning draw, away at Barcelona, Simeone extolled humble virtues often lost in the din of modern professional football.

That Atlético are now triumphant is genuinely significant. Setting aside Rangers’ spectacularly grubby fall from Scotland’s top tier, the last decade has seen Spain develop its own high-end version of an Old Firm hegemony. It lacks the visceral tribalism and tiresome sectarian hatred which renders the Glaswegian rivalry so horrifyingly cacophonous, but this represents only the smallest of credits in the El Clásico ledger.

Aided by pitiful financial regulation, enormous commercial appeal and a television deal which casts the Premier League as some kind of Marxist experiment in wealth distribution, the Barcelona-Real Madrid axis essentially snuffed out the element of competition. Often taken for granted, that is something without which the game cannot long survive.

In their endless quest to maintain pace with each other, and the rest of the continent, the Spanish giants relegated their own national pursuit to a lengthy, fruitless exercise. Outside of mutual dates, the majority of their fixtures became mere statistical entries. Opponents, unable to compete with Madrid’s wealth or Barcelona’s ruthless talent, simply gave up. Fielding weakened, barely motivated teams, opposition minds were fixed already on the next fair match-up. Seasons would be reduced to two-legged contests, where only the meetings between Madrid’s millionaires and Barcelona’s gossamer-shod starlets (also millionaires) held any allure.

None of this is especially surprising. Real, blessed with understanding bankers, have long pursued the sport’s best players as a matter of course, although they are purchased primarily to address the obsession that is European glory rather than simple homebound success.

Embarrassingly for a club of that size, prone to bouts of eye-watering, near psychotic largesse, its most recent trip to the Champions League final occurred in 2002. That was two years before Valencia secured a second La Liga championship in three campaigns, thus breaking, for the last time until 2014, the stranglehold of the country’s traditional duopoly. The victory over Bayer Leverkusen at Hampden Park signified the zenith of the first galácticos era and the crusade for a tenth European crown — La Décima — in the years since has taken on a faintly deranged edge as the memory of Zinedine Zidane’s wondrous goal begins to fade. A carousel of ludicrously expensive acquisitions is now as synonymous with Real Madrid as the colour white.

Barcelona, too, have splurged but the Catalans’ recent dominance, at home and abroad, stems more from an epoch-defining group of superstars moulded by the club’s singular philosophy. Lionel Messi is the best in the world yet he cost no more than bed and board, a transatlantic flight and some pricey HGH injections.

In this environment the accomplishments of others seemed little more than fond memories. As the rest of Spanish football lurched from administration to bankruptcy, Real and Barça, enemies and partners, rumbled on. Nobody else stood a chance. Until now.

Atlético’s rise need not be taken as an overly romantic celebration of pluck or quaint parsimony. This is a massive club, one of the largest in Iberia. Its stadium currently caters to 54,000 ardent spectators and a new home, due to open in 2016, will allow for 16,000 more.

It is not a well-run institution. Notoriously unstable, Atléti was once ruled over by the late, coach-gobbling Jesús Gil, a man unafraid to engage in quite stunning acts of whimsy and caprice. A stint in the second tier between 2000 and 2002 was alarming, no doubt, but surely attributable to Gil’s destructive presence rather than a settling of the natural order. Financially, Atlético exists in a precarious hinterland, like many of its compatriots. Debts and taxes hang above any measure of achievement and a leading Spanish economist has described the situation as “dramatic”. In truth, Simeone and his charges have excelled in spite of this reality.

Their record, however, is astounding. Unveiled as manager in December 2011, Simeone’s new employers, at that stage, sat 10th in the table. In 2013/14 they would return to its pinnacle for the first time since winning the title in 1995/96. The period in between his arrival and last Sunday’s crucial tie has seen the team defeat Athletic Bilbao in a Europa League final and Chelsea in the UEFA Super Cup. Real were vanquished in the 2013 Copa del Rey showpiece and, in April, Atlético conquered Chelsea to book a slot in the Champions League decider, 40 years after their previous appearance. Standing in the way: their neighbours.

In his playing days Simeone was a peculiar mix of elite-level footballer and ferocious midfield bruiser. He spent seven years at the Vicente Calderón Stadium — split into two spells — and the Atlético fan base worshipped his proudly blue-collar efforts in a city more synonymous with the preening ostentation on show across town. His obvious managerial qualities notwithstanding, the former captain’s ethos has connected once again with his own supporters. Forged in the image of its coach, the team’s undeniable talent is infused with relentless, hard-nosed pragmatism.

These new champions are an assorted bunch: established B-listers, exciting up-and-comers, fading names and unheralded journeymen. All are completely wedded to the aims of an inspired collective. Indeed, when true star dust emerges, little can be done to preserve it, such are the pressing fiscal considerations. Simeone had little say in the sale of the free-scoring Radamel Falcao to Monaco. The Colombian was a prized asset whose value could no longer be left unrealised but, fortunately, Diego Costa emerged as a spectacularly effective replacement spearhead.

A thrilling encapsulation of the skill and brutal power that will define this side in future discussions, he too is destined to seek pastures new. Thibaut Courtois, the gifted Belgian loanee who has announced himself as a world-class goalkeeper during a three-year hiatus from Chelsea, could easily follow the forward back to Stamford Bridge.

Such departures are a pity, for Simeone has built a refreshingly honest unit, one with the skill to take six points from Real and Barcelona this season without loss. It is also possessed of the spirit required to come from behind against Chelsea, in London, and seal a trip to Lisbon. It even went to Barcelona and came back with the title, if not the trophy.

Whether or not Simeone can bottle this special formula remains to be seen. He will surely need its sustenance for another assault on his wounded rivals. Ironically, given the certainty of vigorous post-World Cup recruitment at the Bernabeu, as well as the Camp Nou, the Argentine’s task has become infinitely more difficult, now that he has triumphed. The present deeds will suffice, for the moment; by Saturday night there may well be more to cheer. Believe. Work.