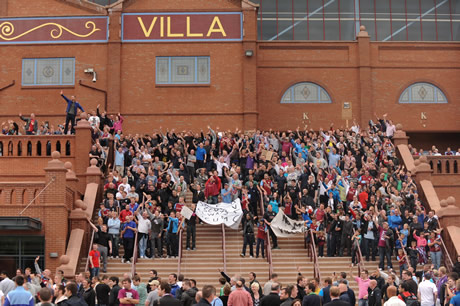 From O’Neill to Houllier and then the ill-fated McLeish, could the next man added to the list be able to affirm a place in Aston Villa folklore for the right reasons or will he find his way onto the managerial carousel that threatens to engulf the club.

For a long period of time in the Premier League, Villa were just one of those teams, the team that may start off well or badly but would always conveniently end up finishing mid-table. When Martin O’Neill joined Villa in 2006 this appeared to have changed.

In O’Neill’s final season in charge at Villa Park he took the team to 6th place, just 6 points outside the top 4, the club finished in 6th place three seasons in a row under the Northern Irishman’s guidance. He commanded a team of some of England’s hottest properties with the likes of Manchester City and Liverpool desperately trying to tempt his stars away from the second city.

O’Neill shocked all by walking out on Villa less than a week before the start of the 2010-11 Premier League campaign. Throughout the summer he was tasked with the unenviable job of holding onto industrious midfielder James Milner. He was forever fighting a losing battle and he knew it.

To be perfectly honest the man chosen to replace O’Neill wasn’t a half bad acquisition. Gerard Houllier is a very experienced coach with a rich history of achievements, most notably winning a treble with Liverpool in 2001. He was however walking into a side who had just lost a shining light in Milner and a fan base still disgruntled by the loss of their charismatic manager.

Under Houllier, Villa slumped back to mid-table mediocrity finishing 9th in the league, Houllier didn’t even get the chance to pit his wits in the Europa League as they had already been disposed of in the qualifying rounds. Whilst this wasn’t the most impressive of seasons it did seem Houllier would be safe in his job.

Unfortunately, a health scare forced everybody’s hands and Houllier resigned from his role as manager, whether he will return to management is questionable as his health does seem to be at great risk when partaking in such a stressful career.

The Villains once again needed a captain to steer their ship back towards the top. Wigan’s knight in shining armour Roberto Martinez was offered the role but turned it down choosing to instead remain with Wigan Athletic. The much more aspirational figure of Rafael Benitez had reportedly also had talks but also turned the job down due to a lack of promises regarding transfer funds.

Third time lucky I suppose. The man who finally took the job was none other than Alex McLeish, who was manager of recently relegated rivals, Birmingham City. If Chairman Randy Lerner was looking for a way to ceremonially irk an entire fan base, he had found it. Fan protests had already begun before a ball was even kicked.

Under McLeish Villa won just seven Premier League games earning 38 points, an amount that would have seen them relegated in the 2010-11 campaign. Admittedly McLeish had a large amount of injury issues to deal with least of all Darren Bent’s long term lay off as well as the tragic news regarding captain Stylian Petrov, although they still had only managed two wins in their first ten games, drawing six of those games.

As one fan affectionately wrote: “Football under Eck… As ugly as Shrek” Ignoring the tongue in cheek humour, they were right. McLeish wasn’t known as an advocate for tiki-taka football, Lerner would have known what he was getting from the Scot but did the hit of getting rejected by others make the American desperate?

The news every Villa fan then broke, McLeish has been relieved of his duties. It would be safe to assume that no Villa fans would have lost any sleep after hearing that news.

Aston Villa are now looking for their fourth permanent manager in just 3 seasons. Stability appears to be at a loss at the Midlands club.

Former Manchester United super sub Ole Gunnar Solskjær came out as the surprise candidate for the position. Currently manager of Norwegian club Molde FK, Solskjær has been trying to forge a career in management. Despite personal meetings from Lerner himself, the relatively inexperienced Solskjær eventually turned down the chance to make the jump back to the Premier League, citing “family issues” as the reason to remain in Norway.

What’s next for Aston Villa? Are they now the poisoned chalice? The team clearly lacks funds and any manager coming in would have to build a squad largely on a sell-to-buy policy. Having drifted so close to relegation any manager will fear that they may not have the formula to take Villa back into even the mid-table mediocrity they had previously longed to escape from. Norwich City revelation Paul Lambert is the new man reportedly in line but it would be a surprise if Lambert was to give up such a safe role with the Canaries to enter the lion’s den in Birmingham.

Aston Villa fans are now certainly at risk of getting a third choice coach in once again. McLeish was brought in after Martinez and Benitez had rejected the chance to take over, the club slumped to their poorest league campaign in 17 years. Ironically if Martinez doesn’t get the role at Anfield he has been so heavily linked to this summer he may end up accepting the role he turned down just last season, this would not be a terrible way forward for the club.

No matter who is brought in Lerner may have to find a way to free up some funds to try and revitalise the squad. Having allowed fans to get the taste of being able to compete with the league’s top club’s he cannot now expect them to accept their club’s fall back into old habits. Whilst the club may have drifted so close to relegation the main aim next season is still not survival, but revival. Whether they can bring in a coach who can lead them to recovery is the first big test though.