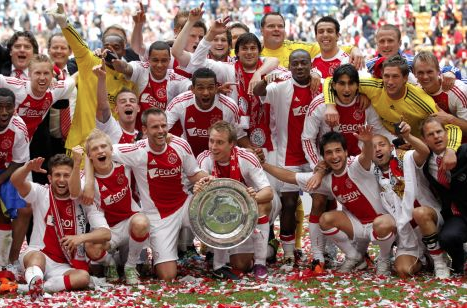 With both the Champions League and Europa League group stages kicking off this week, what impact will Dutch sides AFC Ajax, Feyenoord Rotterdam and PSV Eindhoven make in their respective competitions?

First things first: How did they get there? Ajax have made the groups this year by winning the Eredivise, as first place automatically qualify for the Champions League.

Third place last season FC Twente also had a chance to qualify for the Europa League, but lost out to Qarabag after drawing 1-1 at home in the second leg, leaving them without a European competition this year.

So what chances do the three Dutch sides have of qualifying from their respective groups?

Ajax’s Champions League group includes FC Barcelona, Paris Saint Germain and APOEL Nicosia. Another year and another resoundingly difficult group for Ajax. The common denominator is FC Barcelona. For the last two years Ajax have met the Catalans in their group and for the third year in the row they have had a group almost impossible to prevail from.

The first two fixtures look like they will shape the fate of Ajax in this year’s Champions League.

A home match against PSG is Ajax’ chance to stand their ground and if a result is scrounged from this fixture Ajax may just grow in confidence. Their second group game is in Cyprus to face APOEL, which should result in three points for Ajax and is a must win if they are to make it out of the group.

Ajax’s last match could just be a third place decider, they host APOEL at the Amsterdam Arena on the 10th December, but after two consecutive games against Barcelona and one against PSG in Paris; they may only be competing for third place in this fixture.

Ajax have encountered a casual and cavalier start to their domestic season so far, including a loss to title rivals PSV, this may affect their European campaign as they may at some point have to prioritise league over Europe, especially if PSV continue their run of dropping no points. However discount Ajax at your peril, Ajax are no easy ride and will fight for everything in their Champions League fixtures.

Ajax may well be the Eredivise champions, but after Barcelona and PSG flexed their financial muscles again this summer, they are surely too imperious for Ajax. My prediction for Ajax this year, keeping in mind they are up against some of the super giants of European football is third place, which would see Ajax enter the Europa league knockout stages, possibly joining their Dutch counterparts Feyenoord and PSV.

PSV’s group consists of FC Panathinaikos, G.D. Estoril Praia and FC Dynamo Moscow. An intriguing and exciting group as the Europa League goes, but also a group that should not worry PSV too much. After a desirable start to their domestic season, it is now ensued that they are favourites to seize the illustrious crown off stern competitors Ajax.

So with less worry domestically PSV have a chance to drive on and take the Europa League by the scruff of the neck and see just how much they can achieve. Although the title, similarly to Ajax, will be their likely source of focus, they have a strong squad and one that can challenge for both domestic and European success.

PSV’s most severe threat could be deemed as Russian side Dynamo Moscow. Moscow have spent big money over the past few years and have acquired stars such as Mathieu Valbuena, Christopher Samba, Kevin Kuranyi, and Yuri Zhirkov. These household names pose a threat to PSV and an away fixture in Moscow is intimidating for the side from Eindhoven.

PSV’s first game though is Estoril at home and is a fixture that is predicted as a win. PSV are the authoritative team and should be able to use this game as a warm-up fixture before they face Russian opponents Moscow.

Another possible hiccup could be the Greek side Panathinaikos. A night out in Athens could also be a testing visit for the Dutch side, however the quality is there to help also see off Panathinaikos, even in-front of the Greek ultras.

PSV could well be the domineering force of this group and the talent and pace of Memphis Depay, Luciano Narsingh and Georginio Wijnaldum could be too much for the other competitors. Their home form will decide the group result, but my prediction is that PSV will finish 1st in their group. The form of Russian contingent Dynamo Moscow could however determine the group and shape how it finishes. Either way it’s a fascinating group and one to keep your eye on, if you do follow the Europa league.

Last but not least, Feyenoord. Feyenoord are joined by Sevilla FC, Standard Liege and also Croatian outfit HNK Rijeka. A tough looking group for Feyenoord, especially with last year’s winners Sevilla having a place in the group.

Feyenoord have been handed a huge boost by keeping Captain Jordy Clasie this summer, however they have lost their best defensive players including Stefan De Vrij, Daryl Janmaat and Bruno Martins Indi. These departures have not helped Feyenoord’s start to the season picking up just five points from five games, worrying stats for potential title challengers.

Feyenoord are left with a tricky and challenging predicament. They may have to keep their attention with the league, if they are to climb closer towards title rivals PSV.

However with the Europa league offering Champions League placement next season, Feyenoord may just try their luck. They may have lost crucial defensive leaders, but their midfield and attack does look to contain the ability to at least pick up results from their home fixtures.

The group’s obvious winner would be Sevilla, but that second place spot is wide open and is achievable for Feyenoord. Feyenoord may well just look at this group and fancy their chances. Croatian side Rijeka are not easy meat, but Feyenoord will expect some sort of result against the Croatian first league runners up. They may well also be expecting a similar result from Liege. Standard Liege are a regular in European competitions and are no pushover, but Feyenoord should have the ability to achieve a desired result.

October will bring a possible group defining match-up between Feyenoord and Standard Liege. If Feyenoord are to see off Liege in this game they could well go on to qualify for the knock-out stage, but we will have to wait and see. Their third game is equally as crucial as they have a tough fixture in Croatia against Rijeka, if this game results in a win, which would be the expected outcome they could then start to write their name on second place in the group.

Feyenoord may have a difficult group, but at the same time it is a group that they can emerge from this group if they make the most of their home matches. My prediction for Feyenoord in their group is second behind Europa league champions Sevilla. Feyenoord stand in great stead for this group, behind the somewhat inevitable winners Sevilla and their only real potent threat should be Standard Liege.