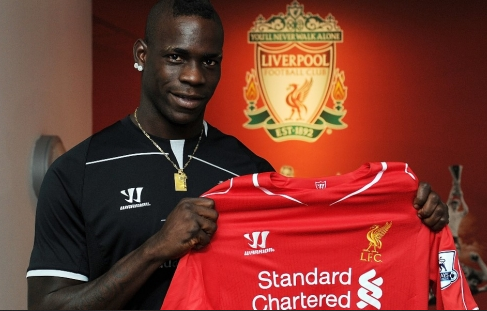 Brendan Rodgers insisted Tottenham v Liverpool on Sunday would “not be the Mario Balotelli show”; in a sense, he was correct, as Liverpool produced by far their best performance of the season so far in a surprisingly comfortable 3-0 away victory, but equally all eyes, at least initially, were on the controversial Italian’s return to the Premier League.

One of nine summer signings, it is fair to say the 24-year-old represents the closest of any to Luis Suarez’s direct replacement.

His introduction to the side meant a return to the diamond formation; a system Liverpool are still unbeaten with since often utilising it during last season’s dramatic run-in. In fact, the only time it has failed to produce a win is the enduring collapse at Selhurst Park – a match the Reds should simply never have thrown away.

That never looked in danger here. The front six looked much the same as last season – Joe Allen preferred to Philippe Coutinho – with of course the big exception being Balotelli instead of Suarez. 4-3-1-2 is a system widely used in Italy, and is one Balotelli has arguably produced the best performances of his career in for his national side, particularly in tandem with the intelligent Antonio Cassano at Euro 2012.

In Poland and Ukraine, it was generally Cassano drifting left, leaving Balotelli to occupy the centre halves. A similar pattern of play here produced a great chance for the debutant within three minutes – Sturridge drifted left, working the ball nicely with Allen and Alberto Moreno, before executing a pin-point cross for Balotelli, but his powerful header was too close to Hugo Lloris.

Thereafter, however, Balotelli appeared to be the striker designated to drift wide and deep out of possession, with his heat map below showing his contribution all over the pitch.

It is likely Rodgers went this way because of Sturridge’s added sharpness and threat in behind Tottenham’s high line, as well as Balotelli’s better hold-up play in deeper positions. This combination was most effectively utilised in the 31st minute, when Balotelli superbly spun the hapless Younés Kaboul, leaving him looking rather foolish in a heap on the floor, before playing a decent through ball for his strike partner. The onrushing Lloris could only clear the ball directly to the Italian, but his 35-yard strike was horribly miscued wide with the goalkeeper stranded.

This summed up his surprising debut – efficient link-up play, selfless willing, but wasteful finishing. Two other presentable chances from set-pieces arrived with Lloris again untested, but they at least illustrated his presence in the penalty area.

In truth, despite having plenty of chances to open his Liverpool account, he was largely a foil for the brilliant English trio of Sturridge, Raheem Sterling and Jordan Henderson. Whenever Balotelli or Sturridge moved wide, dragging Kaboul or Jan Vertonghen with them, the effervescent Sterling or Henderson sprinted into the empty space. This was perfectly executed for the opening goal – Sturridge moved right, superbly finding Henderson’s run ahead of him, who played the ball across the face of goal for Sterling to cutely finish at the back post.

While Balotelli wasn’t directly involved, he was an option for Henderson on the edge of the area, and Rodgers will be encouraged that his sheer presence clearly gave Tottenham an extra problem to worry about.

Suarez, of course, would frequently take two or three defenders out of the game such is his quality. But in Sterling and Sturridge, Liverpool already had their elusive, goal-scoring replacements in the side. In Balotelli, they now have a physical focal point without compromising their trademark transitions, which the less dynamic Rickie Lambert looks like he may, as well as providing increased space for the aforementioned English trio to exploit.

Moreover, while Liverpool boasted only 39% possession, this percentage share dropped significantly on the hour once Moreno had scored the third and Balotelli was subbed to switch to 4-1-4-1. The Italian should help the side retain possession better than Suarez, who for all his genius and goals regularly squandered possession through attempted tricks and forceful passing, particularly in games against weaker sides where space will not be so readily available.

Balotelli certainly has a few tricks of his own, however, as evident by his glorious back-heel for Sturridge to curl at Lloris, and it remains to be seen how he will react long-term to Rodgers’ demands of extra responsibility for the benefit of the team.

If, like Suarez under Rodgers’ tutelage, he can rediscover his shooting boots, then he should have no problem reaping the benefits for himself as well. It is doubtful he will ever have a season like Suarez’s of 2013/14, but the very early signs suggest he will not need to for Liverpool to achieve their aims. And that will delight Rodgers more than anything else.