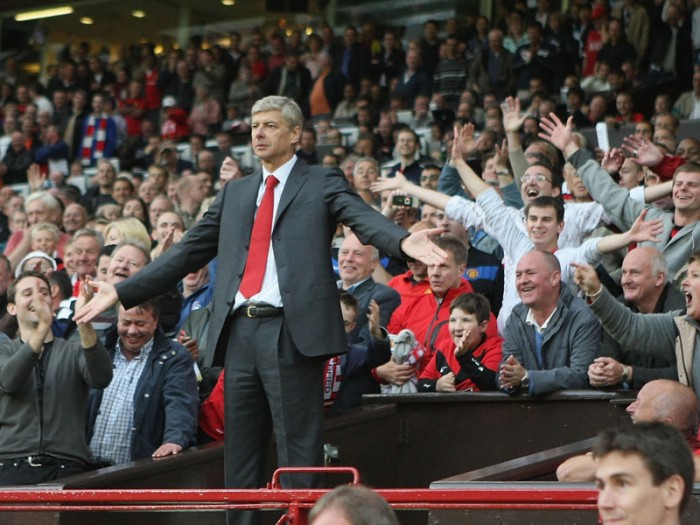 Not in the opinion of this Gooner anyway. I’ve been as vehement a defender of Le Prof as any over the past few years, defending him to the hilt. Although as more time passes and this squad is exposed as having the same glaring weaknesses as it did last year and the year before I’m starting to wonder if I even believe my own arguments anymore or am I just another Wenger apologist.

When I looked at the squad at the start of the 08/09 season I predicted that we would not win anything until this current season. We had a very young squad and I felt they needed time to grow together. Three years should be enough time to do it, and I could accept another trophyless two years of disappointment and embarrassment at the hand of better teams if it meant that this group of young players would peak together and start to push on and win silverware.

However this hasn’t happened; the same mistakes are being made and the same deadwood is still part of the squad having either not progressed, or in the case of a certain Brazilian, gone so far backwards that the overweight fans screaming at the television in the local pub and on the terraces that they could do a better job than him may actually have some merit to their arguments. Going out of three competitions in the last fortnight has been a major body blow to this side and one it looks like they can’t recover from.

I can’t think of an Arsenal fan that doesn’t appreciate what Arsené Wenger has done for this club, but he has to make some radical changes very soon before those baying for his head begin to outnumber those defending him.

Yes, you heard me right, bring in some new players in March. After Wojciech Szczesny mangled Lukasz Fabianski’s shoulder during the warm up for the Manchester City game back in January the younger Pole then ended up dislocating his finger and straining the tendon in his hand against Barcelona leaving Arsenal with only one senior goalkeeper in the form of the error prone Manuel Almunia for the remainder of the season. If Almunia picks up an injury it will mean our first choice goalkeeper will be 19 year old James Shea who is yet to play a game higher than reserves level. An emergency loan signing is badly needed and Arsené seems to have someone in mind so hopefully that will be squared away shortly.

Kyle Bartley needs to be recalled form his loan spell at Rangers. There are currently three fit centre backs at the club. Koscielny, who has impressed in his first season at Arsenal but is still prone to error and has played a lot of games this season. Squillaci, a player so slow that when we play our usual high line with him in the team it’s akin to committing tactical suicide. Miquel, a reserve team player who has played two games for the senior side, both against lower league opposition.

If recalled, Bartley may not get too much game time, but having at least a modicum of top level experience under his belt with Rangers he will be much more capable of stepping into a starting spot than Miquel. Song can play in defence but doing that weakens our midfield far too much for it to be considered a viable mid/long-term option.

Aaron Ramsey made his return against United after a year out of the game so I guess we could refer to him as one of Wenger’s favourite kind of players ‘like a new signing’. Personally I can’t see him having too big of an impact in the remaining months of the season. Next year I hope to see him back to the form he was displaying before the injury that kept him out for so long.

Aside from that there’s not very much Wenger can do before the summer to try and change this squad aside from get them motivated and back on track. The performance against Manchester United in the FA Cup and the second leg of the Barcelona tie highlighted the problem in these games. In both cases the only players who seemed to care that we were losing and displayed a bit of fight were Jack Wilshere and Johan Djourou. With the latter out for the rest of the season with a dislocated collarbone and the former having played so many games at such a young age that he probably isn’t too far away from burnout or muscular injury it paints a grim image of this Arsenal side and their mentality.

Our talisman and captain was, frankly, an embarrassment at the Camp Nou. He looked like he couldn’t care less at the fact we were being dominated and his lazy backheel on the edge of our own penalty area that gifted Barcelona a goal just before half time summed up his attitude on the night for me; one of forlorn indifference. After the game he claimed he was injured from the 15th minute onwards. If that was the case he should have taken himself off like he did against Stoke instead of selfishly not wanting to remove himself from the spectacle of a game at his childhood club. He can do it at the Nou Camp, but not on a cold Wednesday night against Stoke.

Come the summer however there is one thing Wenger needs to do to get this club back on track on the pitch and that’s SPEND, SPEND, SPEND. A manager with as good a grasp of economics you will not find anywhere, but eventually the philosophy must change. This current group of players is not good enough to win trophies and investment is badly needed.

Keep an eye out for Part 2 which we will have on the site tomorrow.