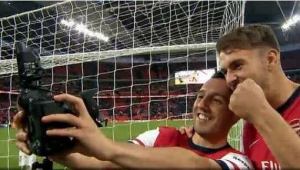 Of course the reaction on Twitter to Arsenal’s post-game celebrations in the wake of their semi-final victory via penalties against Wigan were as binary as one would expect. On one side were those, mainly Arsenal fans it must be said, staunchly defending their team’s right to celebrate the feat of the reaching the F.A Cup final.

On the other side of the fervent, 140 character debate were those, mainly not Arsenal fans, arguing that the Arsenal players’ display was over-exuberant and all a bit ‘cheap’ in light of the manner of their victory – reaching an F.A cup Final? Whatever. Celebrate when you’re climbing the steps to lift the cup in May, not when you’ve just stumbled past Championship opposition.

Because of the extra-time and penalties ITV’s post-match analysis was smushed into a five-minute window, interspersed with live coverage of the victorious Gunners celebrating in front of their fans and the obligatory weeping child in a Wigan hat. Normally a shortened post-match analysis on ITV is something to be celebrated, yet even such a short window of opportunity was sufficient time for Roy Keane to unleash one of his barbs, a laser-guided put-down – “These Arsenal players need a reality check”

And as much as Keane seems to revel in playing up to cultivated pantomime persona of a no-fool-suffering fun vacuum he had a point – this was bullshittery of the highest level. Arsenal F.C have been no stranger to critical analysis from outsiders, particularly this season; in which for so long they looked so close to breaking their 10 year drought. Yet increasingly the sense is that a lack of self-criticism is an endemic issue holding this team back.

So much of the critique of Arsenal’s season has focused on their lack of ability to win dirty – something which Liverpool showed with their win away to West Ham – yet the focus shouldn’t be on their inability to fight for a result and more on their seeming lack of willingness to do so. That unwillingness to settle for second best – something, it must be said, Roy Keane excelled in, despite technical shortcomings – is what is lacking from this current Arsenal team. And the blame for this must be appropriated at the feet of Arséne Wenger.

Wenger is rightly admired for his impact on the world of football. His revolutionary coaching techniques, adherence to technical prowess and financial diligence have all had seismic results on the way the role of manager is viewed. His greatest adversary Sir Alex Ferguson recognised this, which is why towards the end of their relationship animosity had given way to mutual respect. In contrast Jose Mourinho, who very much represents the ‘new way’ of football management –  success at any cost coupled with financial might – disregards Wenger as a “specialist in failure”. And it is this ‘new way’ that has resulted in Wenger’s current predicament. 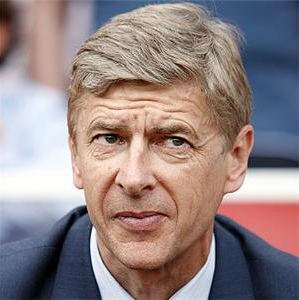 18 years and counting, he may well be the last of his kind. Key to sustaining such a stewardship is a mix of vision and flexibility. His old friend Fergie had it, though toward the end even he struggled with the burgeoning growth of player power. And with Wenger the ‘new way’ of football – the crave for instant gratification through silverware and all the ‘Mourinhos’ willing to supply it at any costs – has led to Wenger becoming more entrenched in his footballing principles. So abhorrent the ‘new way’ seems to him that even – in terms of trophies at least – it is right, the Frenchman would rather be wrong.

To fall back onto his principles so absolutely meant what was being cultivated was a concentrated form of Wenger football, the gene pool was closed off to any outside influence. And, over the course of a few seasons, an inbred bastardised-version of Wenger’s original vision was produced.

The players raised in this environment are totally committed to his philosophy and when it works, against Sunderland at The Emirates this February for example, it is validation of the manager’s and player’s shared beliefs:

Yet when that philosophy is challenged – at Anfield for example, 14 days after the win over Sunderland – the players are so programmed that they don’t know the right way to react. Whereas most successful teams have that element of combativeness to them, even ‘The Invincibles’, Wenger’s opus, was built around a granite duo of Vieira and Gilberto Silva that drove the team relentlessly. In stark comparison, when up against it, the current team resort to petulance .

In short – Le Professeur has built a state overflowing with philosophers but no generals.

In an ironic twist the ‘new way’ of football management, the same one who has perceived Arsenal’s manager as a browbeaten relic, may turn out to be Wenger’s saviour. Instead of his 18th year being his last in North London he may find his 19th will introduce a ‘Director of Football’ or something similar into his life, an extra input that could show Wenger a way of winning that does not betray his core beliefs.

One thought on “Arsenal – The Cult of Wenger”