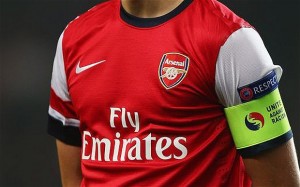 Stick or twist – the January transfer window poser for Arsene Wenger and Arsenal Football Club. Having put themselves well and truly in contention for the title, do they stick with the squad that has gotten them there – or do they look to add more quality to strengthen their push?

Fans will naturally choose the latter option – everyone loves new faces, exciting signings. And maybe an injection of quality could just push the club over the line. Managerial transition at Manchester City, Chelsea and Manchester United has opened the door, surely Arsenal need to seize the moment? Who knows when they might such an opportunity again?

But if Wenger was to go to market, who or what should be on his shopping list? Versatile defensive cover, perhaps? Cover at right back for the injury prone Sagna (Karl Jenkinson still looks a touch raw) and maybe at centre half too? Defensive midfield power? Arteta and Flamini have performed well this season, but wouldn’t more powerful upgrades allow Arsenal compete better physically against the big guns?

Or how about a striker – or even two (now that Walcott is crocked)? A lot rides on Giroud staying fit – his ability to lead the line, bring the midfield into play and pitch in with a few goals has proven vital. But it’s a dangerous game to rely on just one player for such a pivotal role.

But on the other hand, isn’t there a case to be made for sticking with the current set up? Wenger has slowly but surely put in place a balanced side that, while not as free-flowing as previous Arsenal sides, is more obdurate defensively and well capable of picking up points. Changing too much at this stage, no matter how attractive it might appear, could just undermine that subtle balance.

So, stick or twist? It’s a tricky conundrum – but then that’s why managers like Wenger get paid the big money! Personally, I don’t think there’s a need for major recruitment mid season, as the Gunners are pretty well served in all areas – bar attack. Securing cover and indeed competition for Olivier Giroud makes sense and is the only pressing need.

Diego Costa of Atletico Madrid has been linked – but with no experience of playing in England and with little or no time for him to adjust, a price tag likely to be in excess of £30 million looks prohibitive just now.

A cheaper, more suitable option, to my eye anyway, is Aston Villa’s Christian Benteke. He’s powerful, quick and mobile, leads the line well and has critical Premier League experience. Yes, he’s struggled this season, but there’s still plenty of evidence of his ability. In fact, it’s ironic, but that lack of form may just add to his allure – as Villa would find it hard to demand the kind of fee his goal scoring feats of last season might have commanded. And there’s an added plus; unlike Costa, he’d be available to play in the Champions League this season.

Whatever Wenger chooses to do, an interesting transfer window has opened at the Emirates.

One thought on “Arsenal: Stick or twist in the transfer window?”