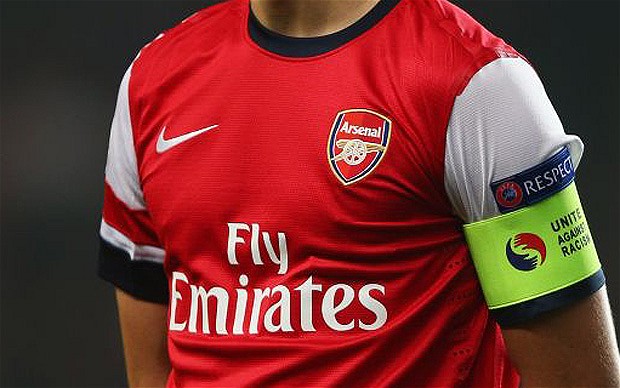 Defined by our old friend Wikipedia as “the creation of public approval not through exemplary or excellent public policy, but through diversion, distraction or the mere satisfaction of the immediate, shallow requirements of a populace”.

From the outside, it would appear the music has stopped at the Emirates.

Football supporters have a remarkably high tolerance for the behaviour of their clubs. They can be apologists-in-chief for the actions of their players, managers and board even in the face of the most damning evidence (a cursory googling of Luis Suarez will quickly confirm this).

This charade will usually continue as long as the twin footballing bread and circuses continue – exciting signings and on-pitch success. Sides like Newcastle and Man Utd spring to mind – fans have had concerns about the off-field running of the club, but a steady flow of good signings and footballing success has kept the majority of supporters appeased.

When one or both of these falter, though, cracks can begin to show in the fan base. Tolerance has a breaking point and there is a limit to the amount of excuses one group of fans can supply, and indeed believe.

Arsenal supporters have had to withstand a lot of trials in recent years – the astronomic (and increasing) ticket prices, sale of prized assets to rivals and a trophy drought being counted in years rather than months to name but a few. The disquiet has been growing steadily with each passing season of on-pitch failure. It has now reached breaking point.

The shambolic display against Aston Villa on the opening day of the season threw their transfer inertia into sharp focus. Szczesny going ‘full Almunia’, a midfield run through with startling ease and an impending defensive crisis has left fans disconsolate.

Choruses of “spend some f*cking money” rained down from the quickly emptying stands during the game’s closing stages. And who can blame the fans for that stance?

As the excellent Swiss Ramble pointed out, Arsenal have a cash reserve almost greater than the rest of the Premier League put together. Since moving into the Emirates, their net transfer spend has been -£57.4m. Which makes it profit, not spend. Reports of Arsenal’s official transfer record vary, but the widely reported £16.5m for Cazorla would be the highest fee paid – the Gunners have received eight sums in excess of this value.

Of course, had the Higuain or Suarez moves come to fruition, they would have easily broken that spending record. But they didn’t. All of Arsenal’s ‘primary’ transfer targets have been missed, with Luiz Gustavo opting to sign for the 11th best team in Germany rather than move to the Emirates. Any moves now will have the distinct whiff of panic buys, more Andre Santos and Park Chu-Young than Giroud and Cazorla.

The fans are at their wits’ end – they are seeing one of the most cash-rich clubs in the world missing out on transfers because of an apparent unwillingness to spend. If there was some morsel of success, there could be more slack given to the decision makers at the club, but the closest the Gunners have come since Patrick Vieira won the FA Cup with his last kick in an Arsenal shirt was an humiliating Carling Cup final defeat to Birmingham, which precipitated an equally horrendous run of form which saw them slip from one point behind league leaders Man Utd to a disappointing fourth.

Last season Arsenal were eliminated in the cup competitions by Blackburn and Bradford. Whilst admirably remaining in the Premier League’s top four for Arsene Wenger’s entire managerial reign, they haven’t broken the top two since 2004-05. For a club and manager who enjoyed such success together so recently, the decline has been startling. The buck has to stop somewhere, and at the moment it is stopping at he who holds the purse strings.

Man City have spent almost £100m on new players this summer. Tottenham, who ran Arsenal so close for fourth last time around, have laid out £60m to bring in four players of real quality. Chelsea have been comparatively restrained in their spending, with a mere £31m in the outgoing column. Arsenal so far? Yaya Sanogo from Ligue 2 Auxerre for a nominal fee.

For Wenger, a striker would still appear to be the priority and, if reports are to be believed, he still hasn’t given up on Suarez. There are, though, some far more pressing areas of the squad to look at.

With next week’s trip to Fulham in mind, Laurent Koscielny’s suspension adds him to the list of unavailable defenders including Kieron Gibbs, Nacho Monreal and Thomas Vermaelen. Bacary Sagna could miss out following his horrible-looking fall late on, which would leave just Carl Jenkinson and Per Mertesacker available at the back. Not good, and something which could have been forecasted with such a limited depth in this area of the pitch.

Not only that, but there’s the small matter of an away trip to Fenerbahce in midweek which will go a long way to deciding their Champions League future for this season (incidentally, Fener have spent almost €30m this summer on five transfers in). Fail there, and it will become exponentially harder to attract big names to the Emirates this window.

There can be no quick fix for success – the circuses cannot be called in immediately – so the only thing that will appease the fans is surely signings. Big money signings. And lots of them.

Otherwise, the fans could start to revolt and a long, dark winter could be ahead for one of England’s most illustrious clubs.