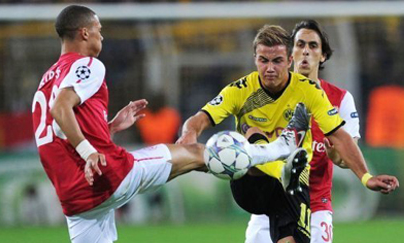 Given the recent run of results for Arsene Wenger’s men, a 1-1 draw in their first Champions League match away to German champions Borussia Dortmund is unfortunately one of the more creditable performances this season.

And while the Gunners showed fight, team spirit, and resolve in abundance up until Ivan Perisic’s 88th minute wonder strike earned the Bundesliga side a point at their home ground, their failure to close the deal showcases why this Arsenal side cannot consider themselves a genuine Premier League and European contender. The prolonged departure sagas of Cesc Fabregas and Samir Nasri demoralized the squad, and even a last day spending spree from Arsene Wenger still sees Arsenal with a more threadbare and youthful, inexperienced side than ever under Wenger, one unable to challenge for top honors like in the past.

While undoubtedly of great potential, the simple reality is that the likes of Emmanuel Frimpong, Johan Djorou, Carl Jenkinson,  Kieran Gibbs, and recently departed players like Denilson and Nicklas Bendtner wouldn’t feature nearly as much at Old Trafford, the San Siro, or the Bernabeu as they have at the Emirates. Ferguson and Villas-Boas have the likes of Berbatov and Anelka, or Carrick and Malouda, to call on, not Marouane Chamakh and Francis Coquelin. Even more worrying is the fact that the side so outplayed by Dortmund, who tallied 23 shots and 57% of possession, is perhaps the strongest one possible for the club in the near future given that Thomas Vermaelen and Jack Wilshere remain injured. Yossi Benayoun and Mikel Arteta add crucial experience and skill in the midfield, and Per Mertesacker should help to shore up a defence that has been criminal at times in recent years. Brazilian fullback Andre Santos will also provide competition for relatively untested Kieran Gibbs at left back. Wojciech Szczesny has solidified his place as the number one goalkeeper and will surely hold his position between the sticks for a long time, with the Polish stopper showing confidence far beyond his 21 years.

But it seems the hallmark of champions is the ability to grind out results despite a lacklustre performance a la Inter’s heroic defeat of Barcelona in the Champions League semi-finals in 2010, or Manchester United’s unlikely comeback win over West Brom in Gary Neville’s last match, subpar performances that still yielded the needed result. Arsenal finally looked a side capable of doing the business even on an off day, with Robin Van Persie’s strike a potential stepping stone to confidence and belief after a rough start to the campaign, with questions surrounding the team’s ability to finish in the top four and the manager’s grasp of the plot. But the disappointment of yet another late equalizer to throw away all three points has become a hallmark of the side in recent years, and it seems to suggest that Golden Generation Wenger has promised so long is simply not up to it, if not haunted, by the pressure of delivering trophies. Blow after blow to the collective psyche- the Carling Cup heartbreak, the Barcelona eliminations, the 4-4 draw with Newcastle, and the most recent thrashing at the hands of Sir Alex’s squad are the main highlights of a horror reel that seems to have put the attitude beyond repair. When it begins to go bad against Arsenal, it seems anything that can go wrong, will, and the players panic.

The new additions will do their part to settle the side, and the youth injection may unearth future leaders in the way Wilshere and Szczesny have been able to contribute significantly immediately. But Wenger’s reluctance to address key issues in the past few seasons has weakened the squad to the point that the title returning to North London seems an outlandish dream, and the Champions League group stages even looked suspect at one point. Progress from the group stages is surely possible, and only four matches into the season it is impossible to say that Arsenal will not have the quality to qualify for the Champions League for another consecutive year. But what once seemed an string of unlucky coincidences has transformed into a clear pattern of failures when it matters most, with no end in sight.