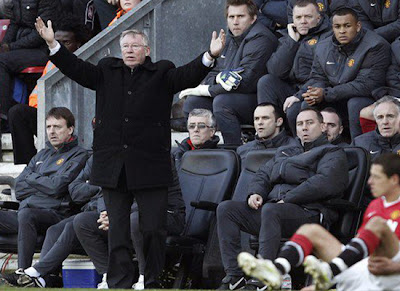 Sitting four points clear at the top of the Premier League and looking likely to secure progress to the quarter finals of the Champions League isn’t exactly the hallmarks of a club in crisis. Manchester United are on course to secure their 19th league title and perform respectably in the Champions League. The immediate future is very bright for United.

Upon closer inspection, however, it could be reasonably suggested that Manchester United are a team in irrevocable decline. A number of people, including a reluctant section of United fans, are beginning to call their dominance into question. Tuesday night’s defeat to Chelsea was yet another reminder that Manchester United could very well be a club in terminal decline despite their league dominance.

The first port of call in this line of argument is the boardroom politics at the club. United are owned by American businessman Malcolm Glazer, who purchased the club for £800 million in 2005. Opposition to his ownership (first seen in an attack on a van carrying the American that year) has burgeoned in the past 12 months. Many disgruntled United fans now lend their support to the “LUHG” (Love United, Hate Glazer) campaign.

Their anger is quite justified, as it is a visible indicator of the argument that United are in decline. Fans are furious with the seemingly dire financial state of affairs at the club. Glazer is believed to have amassed debts of over £1 billion due to relatively unsuccessful investments in American shopping malls. United’s debts are believed to be in the region of £750 million, with interest payments on such debt crippling the club’s financial capacity.

Number crunching isn’t a particular skill of mine, but it is clear that United’s financial position is untenable. In terms of this article, United’s lack of money severely hampers their capacity to invest in their playing squad. With each transfer window that slips past, United are mere spectators. Ferguson has been forced to watch rivals Liverpool, Chelsea and City invest heavily in their playing squads whilst contenting himself with bargain players like Chris Smalling and Gabriel Obertan.

United risk looking increasingly ordinary if they have no means of investing in their squad. In their current squad, there are a number of players who can be classed as being “on the way out”. Gary Neville has already bitten the bullet, with Giggs and Scholes, despite their fantastic service to the club, definitely in the closing stages of their careers. There will be no transfer reward for such players, and money from the Glazers does not seem to be forthcoming.

Indeed, the issues there are with the squad require strong and decisive financial investment. Fans have been tearing their hair out with the ineptitude of Michael Carrick for quite a while now, and permanent residents of the treatment room like Owen Hargreaves will eventually have to be booted out. Darren Fletcher, whilst a good player, last night showed again that whilst having all the heart, he often lacks ability.

Question marks will always linger over players like Park Ji-Sung, Wes Brown, and John O’Shea. They are the sort of players who receive the often wooly “good squad player” judgement without doing much to ever inspire confidence. As for younger players, the jury is still out on the likes of recently signed Smalling (who conceded last night’s penalty), Fabio, Gibson and Obertan.

As for the rest of the squad, only a fool would deny there is some real quality there. Wayne Rooney, for all his disciplinary issues, is one of the best strikers in the world when on form. Dimitar Berbatov is a poised yet frustrating forward. Players such as Nani and Valencia may not be world class, but they can be effective if used properly. In terms of defence, United are still strong with the solid duo of Ferdinand and Vidic being shadowed by the talented Ulsterman, Jonny Evans.

Whether these type of players are enough to arrest United’s apparent decline, I am not so sure. The match at Stamford Bridge highlighted how Manchester’s most famous club are no longer the unbeatable behemoth they once were. In seasons gone by, United throwing away a lead was unthinkable, but to lose from a winning position would have been unheard of. United looked distinctly ordinary, and the lack of options on the bench was apparent. Ferguson’s decision to bring on Fabio when the team was 2-1 down was mystifying, to say the least.

So, is there anything we can conclusively say about United’s decline, real or otherwise? There is certainly no doubt that United’s financial position will check their future ambitions if not rectified. Liverpool’s recent ownership crisis has shown that club progression fits hand in hand with a stable set of owners. If United want to continue their trophy winning form, they will need to be run by somebody with the capacity to invest in line with their ambitions.

If not, Manchester United may find themselves scrabbling for fourth place whilst better funded clubs surge ahead.

10 thoughts on “Are Manchester United in terminal decline?”