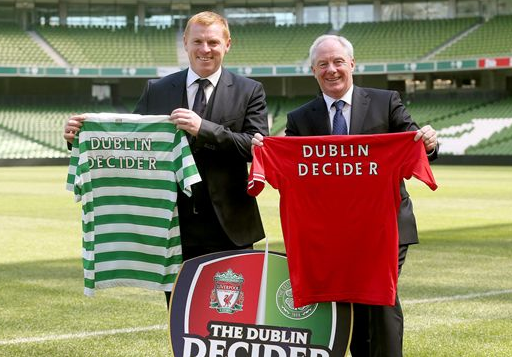 Already, some have greeted the announcement with energetic positivity, getting behind the FAI and the league for setting up the big-name fixture, while others have simply scoffed at the idea. But when all is said and done, there still remains a lot of people caught in the middle who just can’t seem to make up their minds; are glamour ties, such as this one, good for Irish football?

Frankly, it’s not hard to disregard all of the pomp and ceremony behind fixtures like this one, at least not from the perspective of domestic Irish football.

For starters, with a trip to the UK barely stretching many people’s wallets on a normal weekend of footballing action across the water, it’s not difficult to find an excuse to go and watch the likes of Liverpool or Manchester City during a regular season. According to the Guardian, over 174,000 Irish spectators flocked to Britain to enjoy their football in 2011.

So, with the tie falling just three days after title-chasing Liverpool entertain Newcastle United in a potentially historic match, can the promise of a second-string Brendan Rodgers side playing against the Hoops at the Aviva really entice fans all that much? And should it be as hyped and built-up as it’s already been?

In particular, with the World Cup dominating the preparation and schedule this summer, it’d be hard for the Liverpool boss to swing it so that England coach Roy Hodgson or Uruguay head-honcho Óscar Tabárez have to risk some of their biggest stars for a meaningless money-making match in Dublin.

And so it begs the question: How much benefit would a typical tie such as this be for a club like Rovers?

As a stand-alone game, it would not help them out much at all. In fact, even a string of high-profile friendlies in the middle of their season would only serve to detract from the focus they could invest in their own league.

And if it’s an argument of teams getting the fantastic opportunity to test themselves against a superior side, there’s little room for logic there either. These ties don’t come around with enough regularity or purpose for any Irish side to reap the benefits – it simply wouldn’t help.

A quick reminder of the Irish League XI encounter against Manchester United back in 2012 which ended with Sir Alex Ferguson’s side coming away with a comfortable 4-1 win at Windsor Park underlines precisely how confidence-sapping sporadic matches like this can be. A robust thumping like that can be spun any which way, but it should seem crystal clear to most; it’s only a damaging venture for Irish football.

Furthermore, with the Airtricity League a summer one, this fixture comes slap bang in the middle of quite a busy, albeit early, period – it will be Rovers’ fourth match in a fortnight and a mere two days prior to a league clash against Athlone Town. And although friendly games are often quite commonplace up and down the country throughout July in particular, the glamour tie is of a different sort.

After all, it’s all well and good to invite the likes of Birmingham City or Aston Villa for a contest, because those are teams that can be used as a veritable measuring stick – managers like Trevor Croly can take something useful away from a match like that. But to take on what will likely be a disinterested Reds outfit in the middle of May seems like a very unsound idea.

Yes, there will probably be an excellent turn-out, and yes it will generate lots of revenue for the club, but do match-ups like this really have a good, long-lasting effect on our local game?

It’s hard to see why they would. The only real element that could help the two tiers in Ireland develop significantly over time would be to get larger crowds through the turnstiles on a more regular basis – and, just as much so for the second round EA Sport Cup ties as for midweek clashes against footballing Goliaths.

At the end of the day, heading down on a more habitual basis to your local ground to lend support on a Friday night would not only be appreciated more by the players and the staff, but it would really help the game progress. To be blunt, and perhaps overly-romantic, it’s not fair-weather fans that make the game better, it is those who turn out in the freezing cold in October, or wait patiently with a flask of tea in hand for a match to start after a 10-minute floodlight delay.

In essence, glamour ties are not healthy for the game as a whole. But choosing football in the cold light of day over the warm glow of a crowd-filling cash cow is something that might just make a real difference.